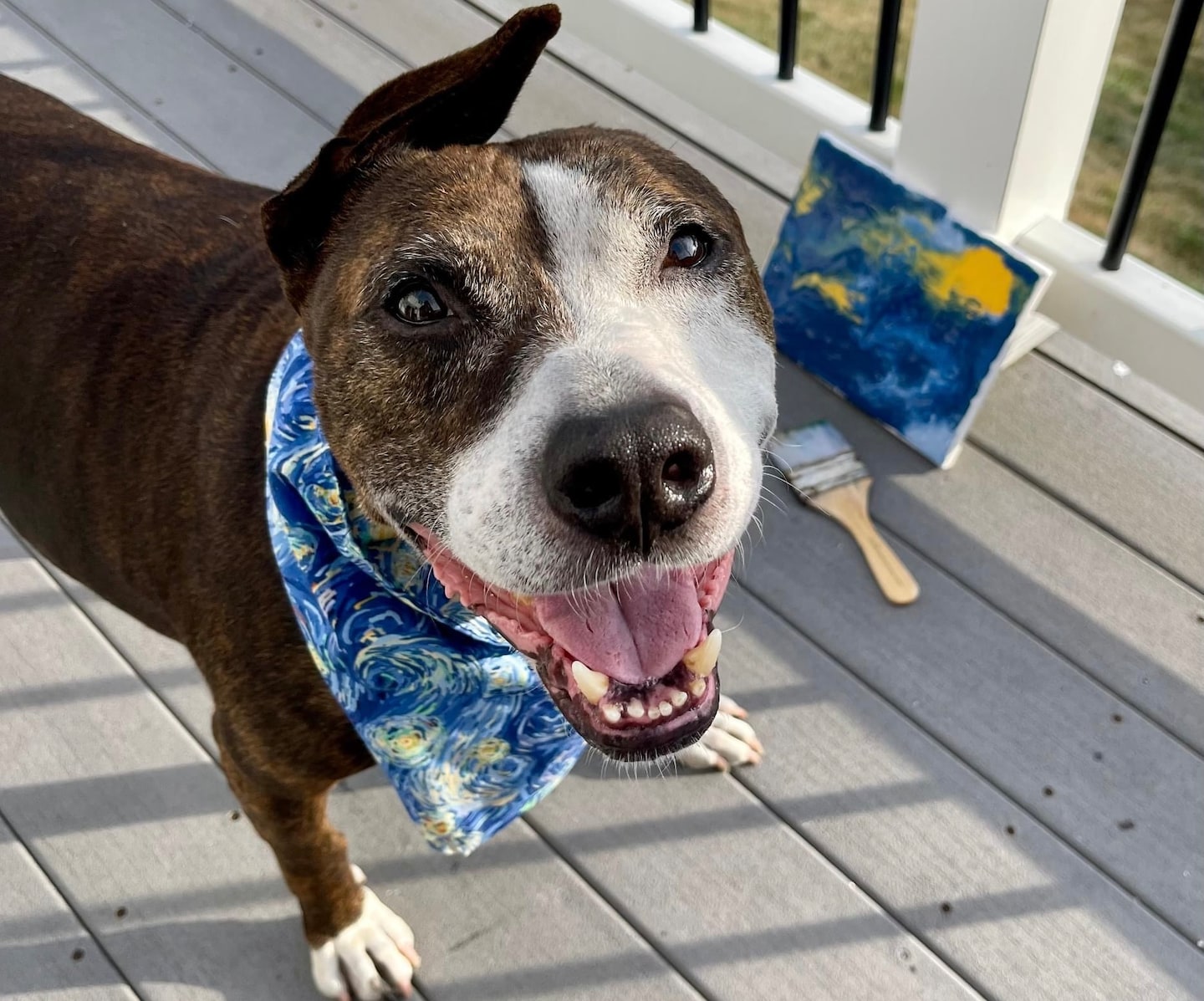 Jaclyn Gartner was scrolling through photos of shelter pups when one caught her eye: a dog named Van Gogh with only one ear. His left ear had been ripped off in the cruel world of dog fighting, and he was found bloodied and cowering inside a drainage pipe, covered in cuts and scrapes.

A shelter in North Carolina was trying to get him adopted.

“He’d had an absolutely horrific life, and yet he looked happy, and I was told he got along well with people,” said Gartner, founder of the Happily Furever After Rescue in Bethel, Conn., which takes in pets at risk of being put down in shelters. “His ear had to be surgically removed, but Van Gogh was resilient, even after all he’d been through.”

Gartner arranged for the nonprofit Pilots N Paws to fly Van Gogh to her in Connecticut in June. She put out the word on Facebook, Petfinder and Rescue Me that she had a friendly, one-eared dog in need of a home, but nobody wanted the 7-year-old boxer pit bull mix.

“Not a single application came in,” she said, explaining that he was staying with various foster families. “I couldn’t believe it. He was the cutest dog ever.”

After he’d been a part of her rescue for four months, she looked at Van Gogh with his one ear and an idea sparked of how she could make him more adoptable.

“I’d seen TikTok videos of other dogs creating paintings, so why not Van Gogh?” Gartner said. “He certainly had the name and the ear for it.”

So she dropped small gobs of bright paint on an 8-inch by 10-inch canvas, sealed it in plastic wrap and coated the top with a thin layer of peanut butter.

Van Gogh took to his assignment with the gusto of a true peanut butter-loving artist.

He licked the paint into dramatic streaks, and five minutes later when Gartner decided the painting was done (and Van Gogh had eaten enough peanut butter), she took the canvas away. It was perfect.

Gartner thought he honorably represented Vincent van Gogh, the legendary post-Impressionist artist who created “The Starry Night” and “Sunflowers,” as the two artists both became prolific.

He was harassed for the Black Santa on his lawn. Now, he’s a professional Black Santa.

“He has a fast and creative tongue,” Gartner said. “It takes more time for us to get the canvas ready for him than it does for Van Gogh to lick off the peanut butter and smear the paint around.”

One of the dog’s canvasses was dabbed with blue and yellow paint to re-create Vincent van Gogh’s “The Starry Night.”

“We did the art over a week, then I invited people to come and meet him at an outdoor art gallery event,” she said. “I had sparkling cider and pastries and I even set up little stands for the paintings.”

She was disappointed when only two people showed up at the event on Oct. 23. One of them was Jennifer Balbes of Monroe, Conn., who follows Gartner on social media.

“He came up and sniffed my face and we were fast friends. He’s an incredibly sweet dog,” said Balbes, 56.

She went home with a $40 Van Gogh painting titled “Clouds.”

Gartner was crushed that Van Gogh’s first art show was a bust, but decided not to give up. She took action the following day.

“I put out a post on Facebook that I felt bad only two people showed up, and I said the rest of the art was still available,” she said.

Suddenly, everyone wanted it.

“The paintings sold out in two minutes,” she said, collecting about $1,000 for her animal rescue.

Van Gogh continued to complete painting after painting, and in mid-November, Gartner held an online auction. A dozen of the dog’s paintings sold, raising an additional $2,000 for the rescue, which she started in 2020. Almost everyone paid more than the asking price for each painting, she said.

More importantly, Gartner said, Van Gogh was adopted on the last day of the auction by one of her foster volunteers.

Gartner marveled at how he captured hearts online with his whimsical artwork.

She said she was surprised by the sudden interest in Van Gogh’s artwork after his gallery show was a failure.

“I never in a million years thought I’d see a dog become popular for his paintings,” she said. “It’s really changed my life and his.”

Kittens born in museum fighter jet stayed for weeks: ‘Who were we to argue?’

She said the paintings have brought a lot of exposure to her small rescue, which has about 20 volunteers.

“Because of the attention from Van Gogh’s story, we’ve now had other dogs find homes,” she said.

The person who adopted Van Gogh is one of her foster volunteers, Jessica Starowitz. The adoption was made official on the last day of the auction, Nov. 21, Gartner said.

Starowitz had taken over watching Van Gogh from another foster family and decided that she couldn’t let him go, she said.

“As soon as I saw him, I knew he’d be a foster fail,” she said. “He was romping around and licking everyone and playing tug of war. My whole family fell in love with him.”

Starowitz said she plans to keep Van Gogh supplied with paint and peanut butter in case Gartner wants to hold any other fundraisers for her nonprofit. She also started an Instagram page for her talented new family member.

“Everyone loves Van Gogh, and he loves people,” she said. “Whenever he sees a Ziploc bag and a jar of peanut butter, he knows it’s time to paint. But right now, he’s sleeping on a big cushion bed in my office.”