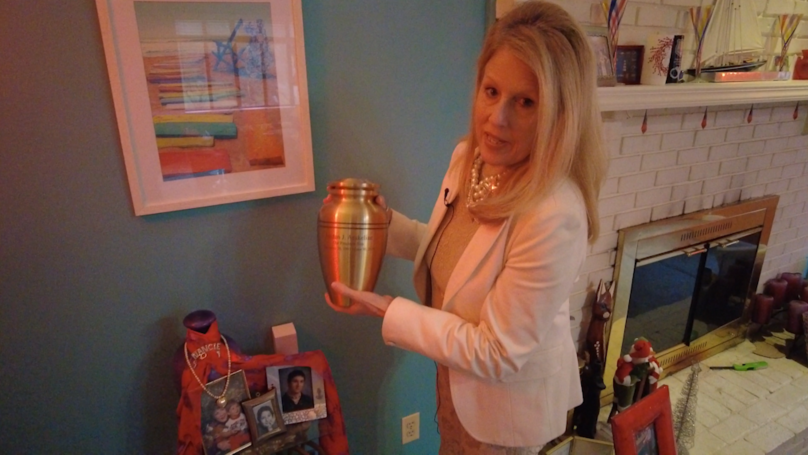 It might look like prescription medication, but just one counterfeit pill can be dangerous enough to kill you.

A Simsbury mom is spreading that message to teens after losing her own son to a drug overdose. Lisa Gray, founder of A Promise To Jordan, wants to keep other families from experiencing a devastating loss like hers.

“He was so smart,” Gray said, holding a photo of her son Jordan. “He loved the company of adults almost more than children, and adults loved his company as well. He could be very funny.”

Gray said Jordan had a lot to give.

“Dear Mom, I will love you forever,” she read from a note that Jordan had written to her when he was in kindergarten. “I thought of buying you flowers in the usual way, but I knew you would prefer a forever bouquet.”

Now at the end of the driveway, there is a white cross in Jordan’s honor.

“That is the spot where our family minivan was parked at the time that Jordan was inside and he used heroin and he overdosed and passed away,” Gray said.

“His youngest brother Adam, he slid open the side door of the van and found Jordan inside cross-legged, hunched over, like he had just fallen asleep and not woken up,” Gray said.

In the worst moment of her life, Gray made a promise to her son.

“As I said goodbye to him that afternoon in the driveway, I made a promise to him that I would continue fighting to save other individuals and families from the devastation as brought on by the disease of addiction,” she said.

Less than a month later, she started the nonprofit A Promise To Jordan, helping people find resources to combat substance use.

Now through new grant funding from the Charter Oak Foundation, she will be giving presentations at five high schools in the Farmington Valley. Her message is the dangers of counterfeit pills.

“It’s killing kids as young as 12- and 13 years old,” Gray said. “I want them to know that one pill can kill. And that you should never take any kind of medication unless it is prescribed to you by your doctor.”

These are pills that look like prescription medications like Xanax or OxyContin, but they are being produced by criminal networks and contain fentanyl, which is 100 times stronger than morphine.

“Each pill is kind of like playing Russian roulette, because you don’t know how much fentanyl is in that pill,” Robert Lawlor Jr., drug intelligence officer for NEHIDTA (New England High-Intensity Drug Trafficking Area), Overdose Response Strategy, said.

Lawlor said teens are meeting people on social media who can get them pills with just a few clicks.

“You can basically order drugs to your house like you could a pizza,” he said.

It is a big problem in Connecticut. The state ranks 12th in the country in the amount of fake pills being seized by law enforcement, according to an NYU Langone Health Study.

“Connecticut isn’t a huge state when you compare it to New York or California or Texas. So to be ranked so high in the amount of fake pills being seized by law enforcement is concerning,” Lawlor said. “They’re quickly becoming one of the primary ways that the cartels are delivering narcotics for street-level sales.”

Lawlor said the best way to protect kids is to educate them about the dangers, keeping in mind that they might still experiment.

“You need to be honest with adolescents and everybody about just how volatile the illicit drug market is,” he said. “And that if you are somebody who uses substances, make sure you have Naloxone on hand, use slowly, and don’t use alone, because we want to keep you alive.”

“This is where I have Jordan’s urn,” Gray said, showing the vase displayed with photos in her living room. “So he’s here with us every day. Very close.”

Gray hopes to convey to the students she speaks to that a loss like Jordan’s changes a family forever.

“It’s more than just the death of the child. It’s the death of every hope and dream we ever have for them, dying along with them,” Gray said. “His younger brothers lost their big brother, they have no one to look up to, and guide them anymore through life. I just hope that they will think about the people that they might be leaving behind.”

Gray’s first presentation to students is Monday, Dec. 12.  She will be speaking at high schools in Avon, Canton, Farmington, Granby and Simsbury.