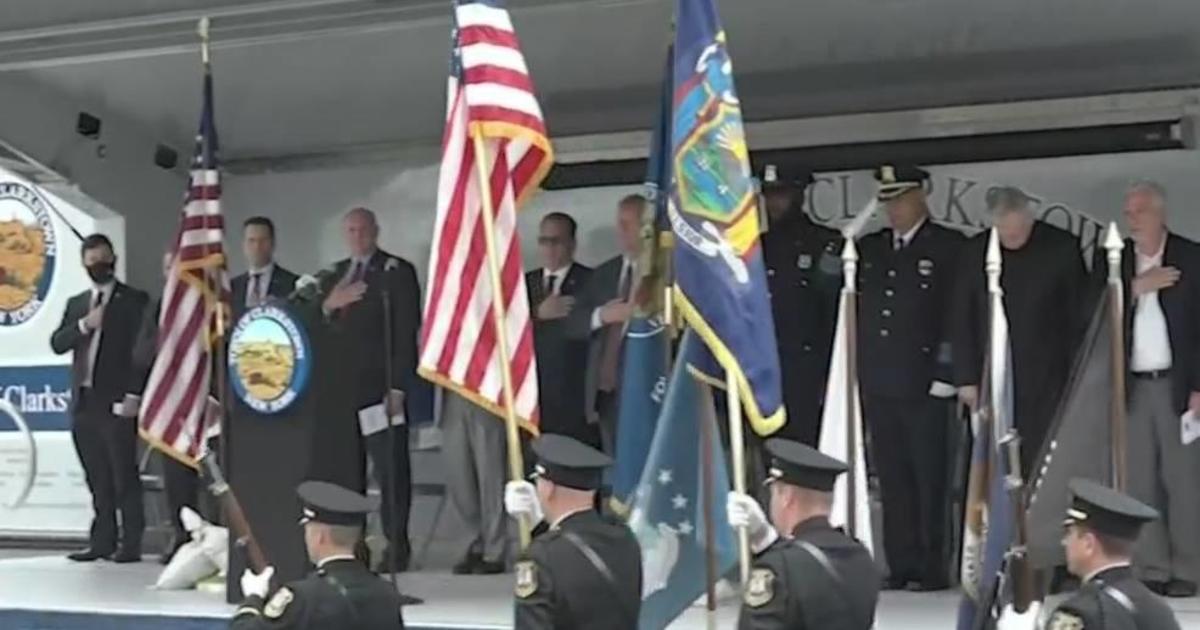 NEW YORK — Patriotism and a deep appreciation for those who have fallen in war were on display at Memorial Day Weekend observances on Friday.

The theme in Rockland County and Westchester County was remembering the “why” behind the holiday weekend, CBS2’s Tony Aiello reported.

The Clarkstown Police Honor Guard presented the colors as veterans snapped to attention and others put their hands on their heart. This Rockland County town gets an early start on Memorial Day with a Friday ceremony to set the tone.

“What it means is paying respect to those who just never made it and, I think it’s important,” said Raymond Botto, a World War 2 veteran.

This year, old soldiers listened as a younger Air Force vet, Spring Valley Police Officer Andre Riobe, talked about his service in Iraq and Kuwait. His duties included the dignified transfer of remains of servicemembers killed in action.

“Those fallen heroes and their sacrifice will always be the ‘why.’ The why behind Memorial Day, the holiday. The why we take a moment of silence. The why we decorate the graves, and the why we honor them,” Riobe said.

Riobe hopes their sacrifice crosses your mind as you enjoy the Memorial Day holiday.

“It’s not just about the fun part, but it’s about remembering those who made it possible to have that fun,” Riobe said.

There were similar sentiments at Westchester County’s ceremony in Katonah.

“But it’s a day that we reflect on all of those that have given the ultimate sacrifice,” a speaker said.

For many, it’s a day of deep patriotic gratitude.

“How lucky we are to be in a nation like we have. Even with it’s imperfections, it’s still the best country in the world,” said Veterans Affairs Director Ron Tocci.

Conflict after conflict, Americans fought and died, and we remember.