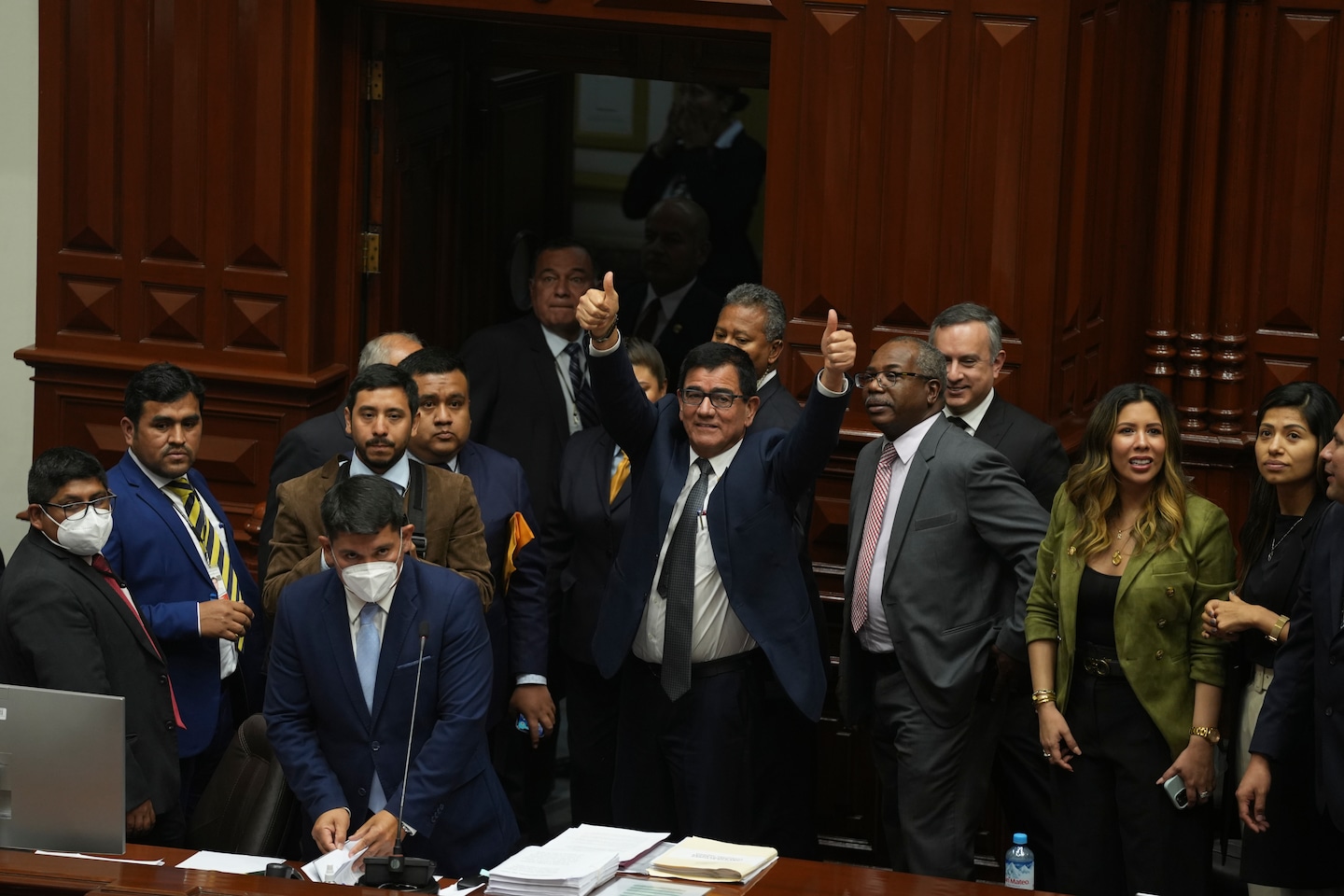 LIMA, Peru — Peru’s Congress removed President Pedro Castillo from office Wednesday, voting to replace him with the vice president, shortly after Castillo decreed the dissolution of the legislature ahead of a scheduled vote to oust him.

The national ombudsman’s office called Castillo’s attempt to dissolve the Congress a coup, although at least one expert disagreed.

“The confusion is in the 15,000 interpretations that exist about who prevails, the Congress or the president,” he said. The one who wins will be the one with more power, he said.

Lawmakers voted 101-6 with 10 abstentions to remove Castillo from office for reasons of “permanent moral incapacity.”

Castillo left the presidential palace in an automobile that carried him through Lima’s historic downtown and later entered a police station. In a photograph circulated by the national police on Twitter, which was later erased, Castillo was visible seated inside the station surrounded by officers.

Shortly before the vote, Castillo announced that he was installing a new emergency government and called for the next round of lawmakers to develop a new constitution for the Andean nation. He said during a televised address that he would rule by decree meanwhile, and ordered a nightly curfew starting Wednesday night.

Castillo also announced that he would make changes in the leadership of the judiciary, police and constitutional court. The head of Peru’s army then resigned, along with four ministers, including those over foreign affairs and the economy.

Castillo took action as his opponents in Congress moved toward a third attempt to remove him from office.

The Ombudsman’s Office, an autonomous government institution, said before the congressional vote that Castillo should resign and turn himself in to judicial authorities. After years of democracy, Peru is in the midst of a constitutional collapse “that can’t be called anything but a coup,” the statement said.

“Mr. Castillo must remember that he was not only elected president of the republic, but also that the people elected representatives for public service,” the statement said. “Castillo’s actions ignore the will of the people and are invalid.”

The congressional vote called for Vice President Dina Boluarte to assume the presidency. Boluarte via Twitter rejected Castillo’s actions, saying “it worsens the political and institutional crisis that Peruvian society will have to overcome with strict adherence to the law.”

Boluarte, a 60-year-old lawyer, would be the first woman to reach the presidency in Peru’s more than 200 years as an independent republic. Bilingual in Spanish and Quechua, she was on the same ticket when voters chose Castillo in July 2021. She also served as minister of development and social inclusion.

Peru’s Joint Chiefs and National Police rejected the constitutionality of Castillo’s dissolution of the Congress in a statement.

Castillo had said in an unusual midnight address on state television ahead of the vote that he would never stain “the good name of my honest and exemplary parents, who like millions of Peruvians, work every day to build honestly a future for their families.”

The peasant-turned-president said he’s paying for mistakes made due to inexperience. But he said a certain sector of Congress “has as its only agenda item removing me from office because they never accepted the results of an election that you, my dear Peruvians, determined with your votes.”

Castillo has denied allegations of corruption against him, saying they’re based on “hearsay statements by people who, seeking to lighten their own punishments for supposed crimes by abusing my confidence, are trying to involve me without evidence.”

Federal prosecutors are investigating six cases against Castillo, most of them for alleged corruption, under the theory that he has used his power to profit from public works.

The power struggle in Perú’s capital has continued as the Andes and its thousands of small farms struggle to survive the worst drought in a half-century. Without rain, farmers can’t plant potatoes, and the dying grass can no longer sustain herds of sheep, alpacas, vicuñas and llamas. Making matters worse, avian flu has killed at least 18,000 sea birds and infected at least one poultry producer, endangering the chicken and turkeys raised for traditional holiday meals.

The government also confirmed that in the past week, the country has suffered a fifth wave of COVID-19 infections. Since the beginning of the pandemic, 4.3 million Peruvians have been infected, and 217,000 of them have died.

Castillo has three times the popularity of Congress, according to opinion polls. A survey by the Institute of Peruvian Studies last month found 86% disapproval of Congress, and only 10% approval. while Castillo’s negative ratings were 61% and 31% approve of his performance.

There’s a marked contrast in the South American country: While in Lima a majority disapproves of Castillo and wants him out, Peruvians in other cities and rural communities across the interior want him to complete his presidential term, and his promises. Many Peruvians want Congress closed instead.

But with few sure votes in Congress, Castillo hasn’t been able to keep his promises including fighting against corruption, raising taxes on mining, rewriting the constitution and going after supposed monopolies that have raised prices on natural gas and medicines.

The first president to come from a poor farming community in the nation’s history, Castillo arrived in the presidential palace last year without any political experience. He changed his cabinet five times during his year and a half in office, running through 60 different cabinet officials, leaving various government agencies paralyzed.

Although Castillo is the first president to be investigated while still in office, the probes are no surprise in a country where nearly every former president in the last 40 years have been charged with corruption linked to multinational corporations, such as the Brazilian construction firm Odebrecht.

Since 2016, Perú has been entrenched in political crises, with congresses and presidents trying to eliminate each other in turn. President Martín Vizcarra (2018-2020) dissolved Congress in 2019 and ordered new elections. That new legislature removed Vizcarra the next year. Then came President Manuel Merino, who lasted less than a week before a crackdown killed two protesters and injured 200 more. His successor, Francisco Sagasti, lasted nine months before Castillo took over.