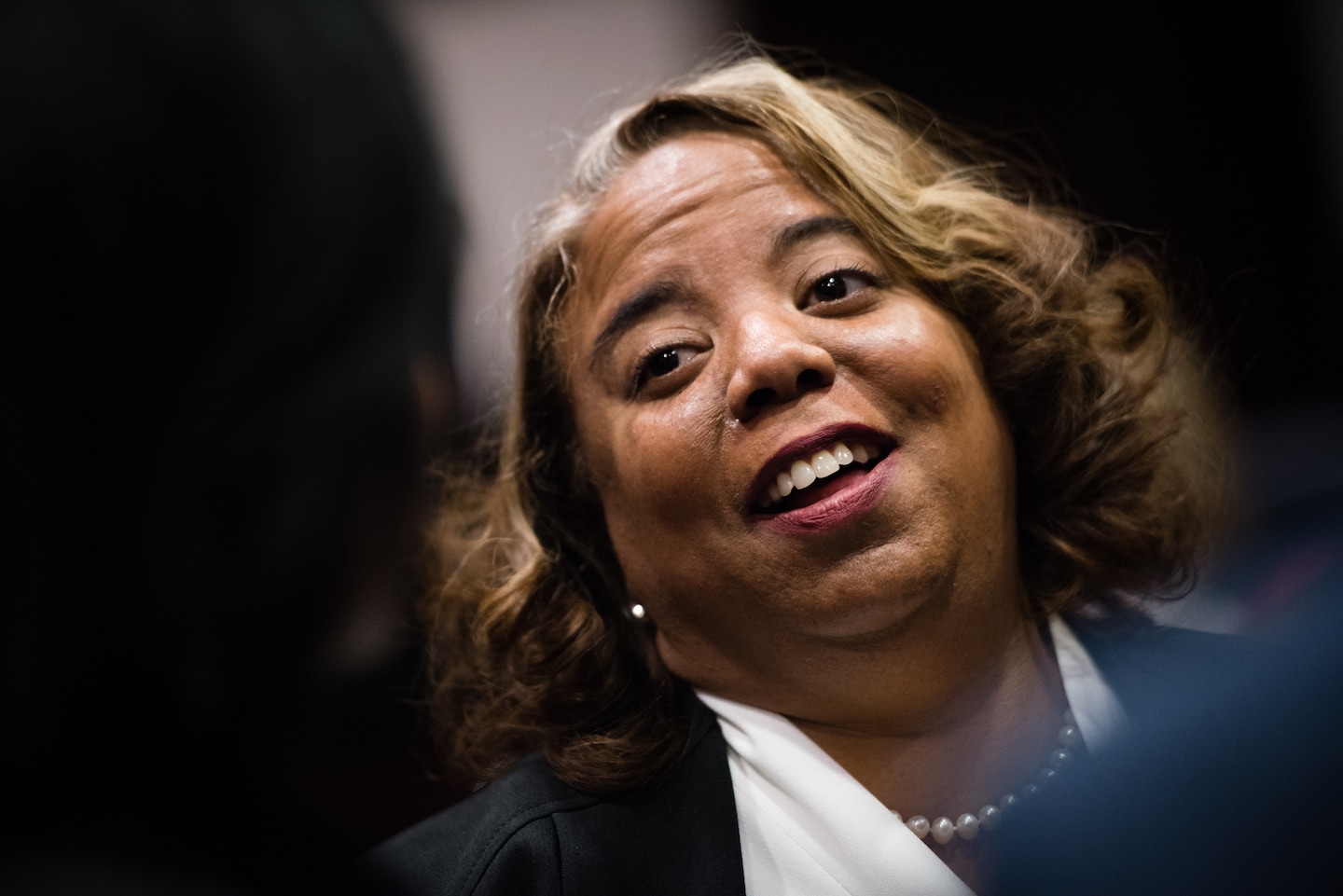 The day had been long and Deni Taveras was exhausted. But the domestic violence survivor in Taveras’s Largo office was on the brink of homelessness, so she stayed to help her navigate English language paperwork in their native Spanish.

“Okay, mami,” Taveras said as they wrapped, to the woman she’d met by chance at an el Poder de Ser Mujer event a few years ago.

Later, Taveras worried. Who would do this work after she left to become a state delegate in Annapolis? Prince George’s County’s Latinos were about to lose the only County Council member who understood.

“I’m sad,” said Taveras, who is Dominican American and term-limited on the council. “I feel sad that my community doesn’t have the representation that it deserves.”

As Maryland voters ushered in a wave of historic statewide firsts this Election Day — and some in Prince George’s County — Latinos were left behind. Prince George’s will be without a Latino county council representative for the first time in 18 years — a span of time that saw the community’s population here diversify and nearly triple.

With the growing group now accounting for 1 in 5 county residents, who will be a bridge between majority-Black county leadership and communities of immigrants from El Salvador, Guatemala and Mexico — many of whom are undocumented and slow to trust government?

While representation of immigrants and first-generation Americans is increasing on the new council, including Taveras’s successor, Nigerian and South African Indian American Wanika B. Fisher, the experience of arriving Latinos is unique, Taveras said.

With her departure, there will be no Latinos on the council, no Latinos in the overwhelmingly Black 39-member cabinet of County Executive Angela D. Alsobrooks and only two on the county school board, including student representative Alvaro Ceron-Ruiz. (Alsobrooks is nominating a Latino to the Police Accountability Board, according to a spokesman.)

Taveras, 49, said she spent the past eight years — four of which predate Alsobrooks — placing issues concerning Latino residents on the agenda, earning a reputation as an outspoken and effective advocate.

Under her tenure, Hyattsville became the first municipality in the county to extend voting privileges to non-U. S. citizens. She led the push for Prince George’s to ensure detained county residents facing deportation have access to a lawyer, and spearheaded a ban on county agencies cooperating with U.S. Immigration and Customs Enforcement (unless people face criminal warrants).

She also championed language access services, which a spokesman for Alsobrooks said her administration is committed to safeguarding. But as her term ends, Taveras still frets.

Who will be there if the woman facing homelessness has another setback?

At 34, Fisher bested Victor Ramirez in July and political newcomer Raymond Nevo in November to represent District 2 and 106,000 residents, 54 percent of whom are Hispanic or Latino.

A lawyer who has represented Prince George’s County as a Maryland state Delegate since 2019, Fisher racked up endorsements along the way — including one from Alsobrooks. She said in an interview that she’d draw on her own experiences as a first-generation resident to relate to her constituents.

“I’ve been there the last four years,” she said, noting that her mother fled South Africa’s apartheid in search of a better life in America. “Members in my community see the work I can do.”

Fisher’s election stung for Taveras, who questioned how far Fisher’s good intentions would carry her, saying there’s no substitute for lived experience.

Less than a decade ago, a national organization was feting then-County Executive Rushern L. Baker III for ushering Latinos into power (at the urging of community leaders). Although challenges of representation are not new in this majority-Black county that was once majority-White, the trajectory troubles Taveras and Madeline LaSalle Frazier, one of two Latinos on the school board.

These Pr. George’s teens are bucking tropes and snatching championships

LaSalle Frazier, who was appointed by Alsobrooks, said she was laser-focused on ensuring equity for Latino students, who are 36 percent of learners in Prince George’s County Public Schools — the highest percentage in the state.

“I can’t do it alone, so I hope our council and county leadership will focus and partner to create pipelines and pathways for Latino achievement, because if we succeed the county succeeds,” LaSalle Frazier said.

In 2021, Latino students graduated at the lowest rate of any demographic group in Prince George’s (66 percent).

The gulf is proof that more work needs to be done to prepare students for a future beyond what they’re seeing, said District 21 Del. Joseline A. Peña-Melnyk (D).

“We have to let our students know that they can aspire for more, bigger and better things faster,” she said.

Taveras, who succeeded a Latino, William A. Campos, on the council, initially backed Yolanda Quintanilla before switching to Ramirez. But she never blessed or backed Nevo, who is Afro Latino.

Nevo questioned her reaction to his bid, noting that although she is a member of a disadvantaged community, her position comes with power and influence.

“You can’t talk about uplifting Latinos and representation and also stab folks in the back and speak ill of them simply because they’re trying to take part in our democratic process,” Nevo, 39, said in an interview.

“In order to create a pipeline, you gotta first learn before you lead,” she said. “You gotta crawl before you walk. You gotta walk before you run. Some folks want to run before they crawl.”

On the council, Taveras “evolved as an elected official,” Ivey said, noting Taveras “got more out of her second term because of the relationships she built with her colleagues in the first term.”

Ivey said the council is and will remain committed to serving Prince George’s Latino residents but acknowledged the void she leaves behind.

“We don’t know what we don’t know,” Ivey said. “To have zero percent representation should be a concern for all of us.”

Latino leaders see a future for representation that includes members of a growing, diverse population of immigrants and their descendants. But they must build the political infrastructure.

Candidates need help learning how to fundraise and someone who can relate to them and who has done the work to assist them along the way, Peña-Melnyk (D) said.

“You create a program and give them tools,” she said. “One thing we also do is mentor who will be the next Joseline and the next Victor.”

It’s a quest that’s being tackled locally and nationally, with Democrats and Republicans demonstrating targeted outreach to Latino voters and potential candidates across the country leading up to the midterms. That strategy shows no sign of slowing down with the presidential election cycle looming.

Fledgling groups such as Latino Dems of Prince George’s County are hoping to fill the pipeline locally, by creating a space for young, politically minded Latinos to collaborate.

Critical to these efforts, said Hugo Cantu, one of the group’s founding members and policy director for District 1 council member Thomas E. Dernoga, is acknowledging that Latinos are not a monolithic group.

Fostering unity among an ethnic group with so many differing identities is complex, said Cantu. In Spanish “There [are] different ways of saying the word ‘bus,’ ” he said, noting differences from one country to another.

Meantime, outgoing District 3 council member Dannielle M. Glaros sees signs that the incoming council will keep Latinos and immigrant communities in mind. Its members will have more bilingual staff than in previous years, she noted.

And although Taveras will be heading to work in Annapolis as one of six Latinos in the 188-seat General Assembly, she won’t be far away: