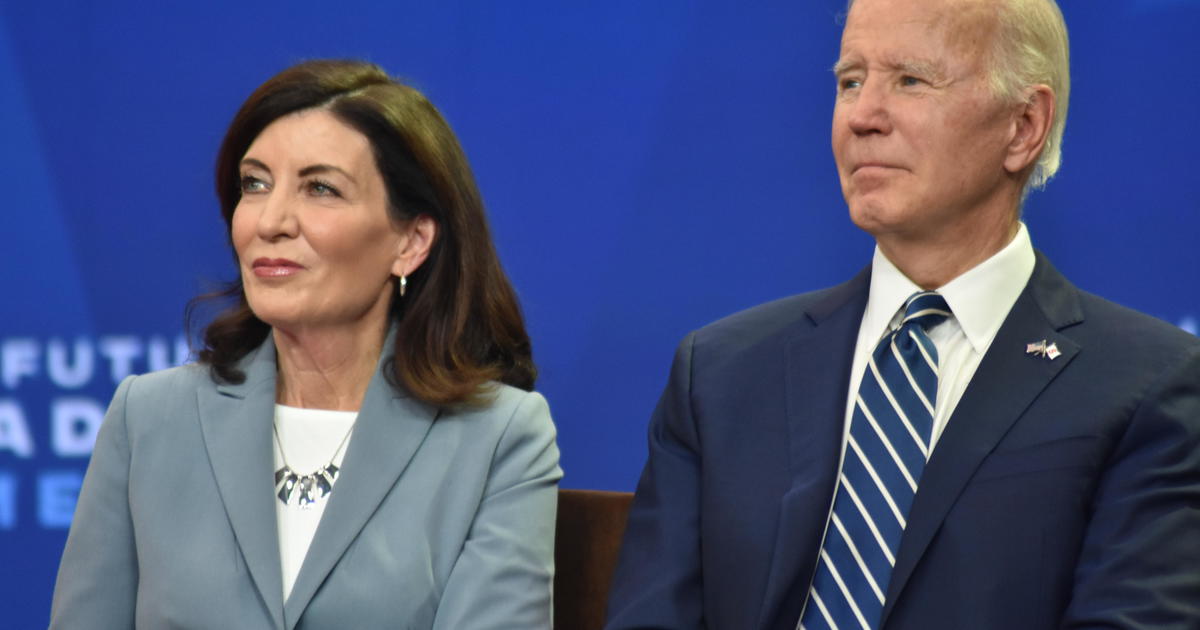 SYRACUSE, N.Y. — President Joe Biden made his second visit to New York in a month Thursday, hoping the pomp of a presidential visit tips the balance in a number of key congressional races and energizes support for Gov. Kathy Hochul, who faces a closer than expected challenge from Republican Rep. Lee Zeldin.

To some, the president’s visit is a calculated risk for Hochul and Democrats trying to prevent a red wave from sweeping New York’s congressional delegation, CBS2’s Marcia Kramer reported.

Mr. Biden hasn’t been a highly sought-after campaigner this election cycle. His favorability rating in New York is iffy – above water in some places, below in others.

“Every year, Social Security and Medicare are on the chopping block,” said Mr. Biden, sounding the alarm in Syracuse over what would happen if Republicans take control of the House.

“Tax credits to lower energy bills, gone. Corporate minimum tax, gone. Under the Republican plan, some big corporations are going to go back to paying zero again. That’s the plan. I would argue it’s reckless and irresponsible and would make inflation worse if they succeed,” the president said.

Mr. Biden was in Syracuse to tout Micron Technology’s $100 billion deal to build a chip manufacturing facility. But it was really a trip to stop Republicans from scoring big in the midterms and give himself and Hochul bragging rights for creating new jobs in an area hit by decades of manufacturing declines – an area where Zeldin is giving Hochul a run for her money.

New York has a number of tight congressional races that could decide control of the House.

Syracuse has one of the biggest toss-ups in the nation to succeed moderate Republican Rep. John Katko. In the Hudson Valley, Rep. Sean Patrick Maloney, the head of the Democratic Congressional Campaign Committee, is fighting for his political life in a battle with popular Republican Mike Lawler.

Republicans were quick to pounce.

“Nothing more than a last ditch political charade,” said Nick Langworthy from the New York State Republican Committee. “This visit is pure politics. It’s because they know that they’re staring at an electoral drubbing and they’re doing whatever they can to try to stop the bleeding … We’re heading into this election with a red wave that’s growing stronger every single day.”

Zeldin questioned the $5.5 billion in tax breaks Micron is getting.

“Marcia, our state has become so business unfriendly that you can’t get Micron to come here without bribing them,” Zeldin told Kramer.

One sign of the president’s questionable political capital is that the White House announced First Lady Jill Biden, not her husband, will attend weekend fundraisers for Rep. Maloney and Long Island Democrat Robert Zimmerman, who is in a hotly-contested race to replace retiring Rep. Tom Suozzi.