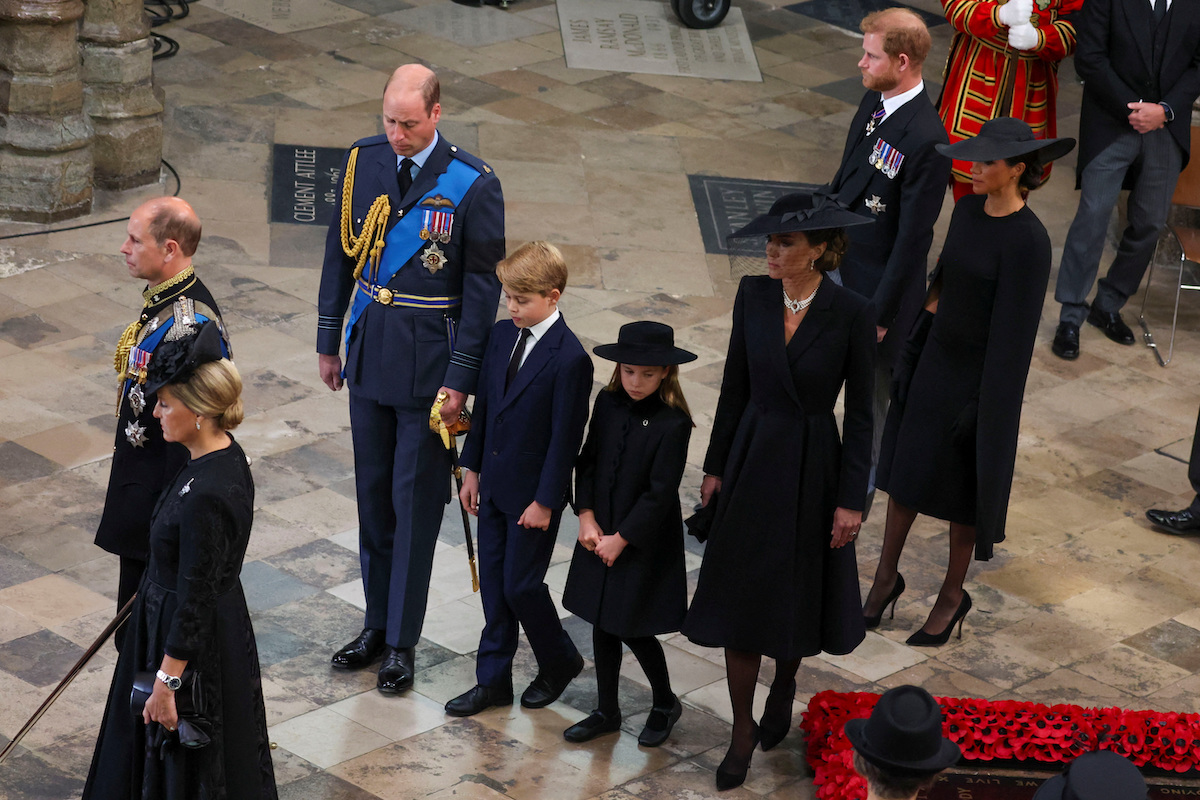 Prince George and Princess Charlotte were there for their parents as Queen Elizabeth II’s funeral got underway on Sept. 19. The 9 and 7-year-old joined Prince William and Kate Middleton at Westminster Abbey to say goodbye to their great-grandmother. According to a body language expert, the young royals were the ones offering “support and reassurance” to the Prince and Princess of Wales.

William and Kate appeared to get ‘support and reassurance’ from George and Charlotte, body language expert says

George and Charlotte comforted their parents during the state service for Queen Elizabeth. According to body language expert Judi James, it appeared they checked on William and Kate.

“There were moments when it seemed William and Kate were benefiting from the support and reassurance of their two small children rather than the other way round,” James told Fabulous per The Sun.

James noted how George, now second in the royal family’s line of succession, didn’t need any reassurance. Instead, the oldest of William and Kate’s children appeared to be checking in on his father.

“Prince George walked beside his father and, despite some glances thrown from William down to his son, George’s upright posture suggested he needed little in the way of reassurance,” James said.

She went on, noting the “expression” George gave William. It “looked more like a warm smile of concern to check he was ok,” James said.

Not only that but the expert also highlighted George’s mature mannerisms. He “mimicked some of his father’s body language, checking and smoothing his suit jacket like a grown-up,” James said.

Although George and Charlotte may have been lending support to William and Kate they had a few emotional moments as well. George’s “eye expression” as he watched the queen’s lead-lined coffin appeared “heart-breakingly sad” to James.

“He was seen to wipe at his eyes during the start of the service but there were no signs that he prompted any expressions of concern from William,” she added.

Meanwhile, George’s younger sister, Charlotte, was on the receiving end of a reassuring gesture from Kate. The Princess of Wales, 40, put a hand on Charlotte’s back, per Cosmopolitan, just before the service began. Later, after the hour-long service ended, cameras captured Charlotte crying, according to Express.

Previously, Kate shared how George, Charlotte, and Prince Louis, 4, had been doing since the queen’s death on Sept. 8. She told well-wishers George understood the loss more than his siblings.

Following Queen Elizabeth’s funeral at Westminster Abbey, her coffin traveled to Windsor Castle. After a short service, the queen’s coffin will enter its final resting place at St. George’s Chapel.

RELATED: Details on Queen Elizabeth’s Cause of Death ‘Likely’ to Have Delayed Release — Expert