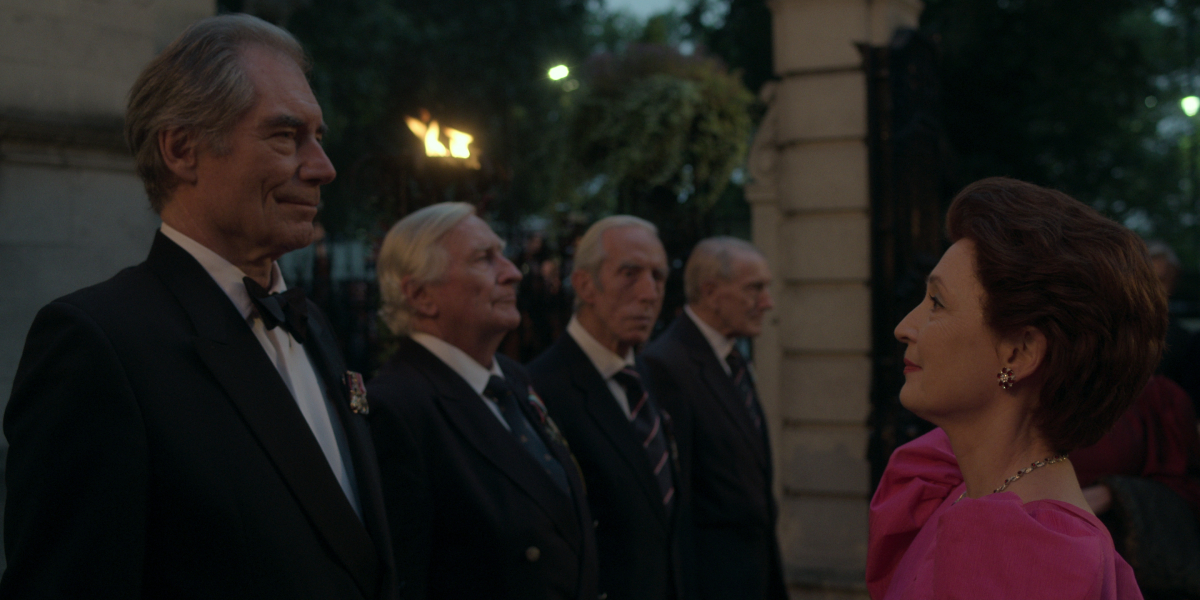 Princess Margaret reunited with Group Captain Peter Townsend in The Crown Season 5, Episode 4 “Annus Horribilis.” Nearly 40 years after their failed romance, the former couple was depicted sharing one final dance at a reception at London’s Caledonian Club. But considering The Crown is a work of historical fiction, fans are asking: did this reunion really happen?

In The Crown Season 5, Princess Margaret (Lesley Manville) reunites with Group Captain Peter Townsend (Timothy Dalton) almost four decades after they’d broken off their engagement. Before they come face-to-face at the Caledonian Club, Townsend sends Margaret a letter to let her know he would be in town and that he would like to see her.

While it’s true that Margaret and Townsend did reunite in the 1990s, there’s no evidence he wrote her a letter beforehand or that he gave her their love letters. The actual event that they both attended was a reunion of HMS Vanguard crew members, so Peter Morgan’s version that fans saw on The Crown was a reimagining of Margaret and Towsend’s final meeting before his death in 1995.

“It’s very tender and very touching. Just seeing them look at each other—that pool of memory and that wealth of love and emotion that they shared together when they were younger is suddenly remembered by both of them,” Manville told Vanity Fair.

“It’s very beautiful. Of course, they have this great evening together and she’s very spirited—singing, messing around, and telling jokes—and he’s witnessing that and thinking of all the life that maybe he hasn’t had. It also reminds her about what she was denied and how her life might have taken a different route if she’d have been able to marry him.”

They reunited more than once after their broken engagement

In addition to attending the reunion of the HMS Vanguard crew members, Margaret and Townsend also reunited in the summer of 1992 for a lunch at Kensington Palace. According to Tim Heald’s book Princess Margaret: A Life Unraveled, Towsend brought along two longtime friends for the meeting.

One friend recalled that “it was a strange and mildly embarrassing meal as the Princess and Townsend talked quietly and intimately together while the other guests conversed among themselves and pretended that the effectively private conversation taking place in their midst was the most natural thing in the world.”

Did Princess Margaret’s relationship with Peter Townsend change the rules of royal marriages?

In the authorized biography Princess Margaret: A Life of Contrasts, author Christopher Warwick claims that the princess and Townsend enjoyed a walk through the palace gardens after lunch.

“Afterwards, as Townsend drove away, she waved goodbye with a pocket handkerchief,” he wrote. “Then, walking back into the apartment, the Princess turned to her private secretary and said words to the effect that he was just as she remembered him except that his hair had turned gray.”

Julie Taddeo, research history professor at the University of Maryland, told Today that she believes Queen Elizabeth II “always regretted not siding with her sister” when she wanted to marry Townsend — a divorced man with two kids who was 16 years older than Margaret.

After seeing Margaret’s unhappy marriage with Antony Armstrong-Jones, and their subsequent divorce, it seems like the queen changed her mind about the rules surrounding unions in the royal family.

“I think it was this experience with her sister that prompted the Queen to allow Charles and Diana to divorce in 1996,” Taddeo said. “Times had changed, there was so much unhappiness on all sides, and the tabloids had become so powerful that there was no keeping anything private.”

All five seasons of The Crown are now playing on Netflix.

RELATED: Princess Margaret: A Look Back at the Tragic True Story of Her Royal Life