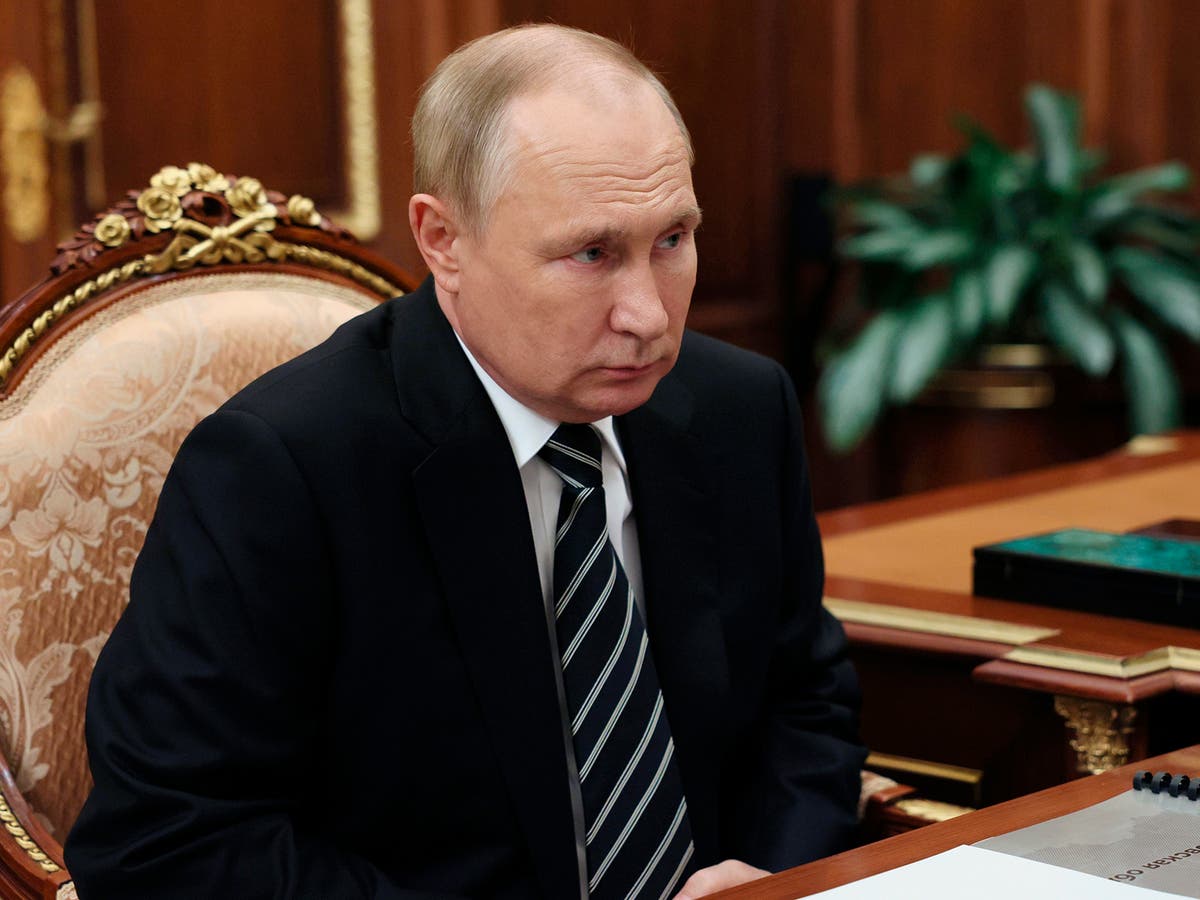 Volodymyr Zelensky rules out talks with Russia if land is annexed

Russia has lashed out with a Kamikaze drone strike in the heart of Ukraine’s Kyiv oblast this morning, according to the regional governor.

The drone attack on Bila Tserkva city damaged some infrastructure and started a fire, with one person injured, Kyiv’s governor Oleksiy Kuleba said.

It comes as Volodymyr Zelensky says his soldiers are moving rapidly to push back Russian forces in the war-hit country’s south, recapturing territory in several regions.

“The Ukrainian army is carrying out a pretty fast and powerful advance in the south of our country as part of the current defence operation. Dozens of settlements have already been liberated from the Russian sham referendum this week alone,” Mr Zelensky said.

Ukraine has taken back swathes of land in Kherson, Kharkiv, Luhansk and Donetsk, parts of which Russia claims control over after last week’s illegal referenda.

Meanwhile, the US has said in a new assessment that it has no indication Vladimir Putin is preparing to use nuclear weapons, despite “nuclear sabre-rattling”.

The Ukrainian soldiers are moving steadily in a rapid push back in the war-hit country’s south to recapture territory from Russian forces, Volodymyr Zelensky said in his address late last night.

“The Ukrainian army is carrying out a pretty fast and powerful advance in the south of our country as part of the current defence operation. Dozens of settlements have already been liberated from the Russian sham referendum this week alone,” Mr Zelensky said.

He added that the land has been taken back in Kherson, Kharkiv, Luhansk and Donetsk altogether, some of which Russia claims control after last week’s referendum denounced by the UN.

“In particular, according to the military reports from the Kherson region: the settlements of Lyubymivka, Khreshchenivka, Zolota Balka, Bilyaivka, Ukrainka, Velyka and Mala Oleksandrivka, and Davydiv Brid were liberated from the occupier and stabilised. And this is far from a complete list,” Mr Zelensky said.

“Our warriors do not stop. And it’s only a matter of time before we oust the occupier from all our land,” he added.

At least 31 Russian soldiers have been killed in the last 24 hours, the Ukrainian military officials said.

The military’s southern operational command said more than 40 pieces of equipment including 8 tanks, 26 armoured vehicles, and a Msta-B howitzer have been destroyed in Ukraine’s counterattack.

The Ukrainian Armed Forces also downed Mi-8 and Mi-24 helicopters in Kostromka and Bruskinskyi districts of Kherson oblast, it added.

Russia has attacked the city of Bila Tserkva in the heart of Ukraine with Kamikaze drones this morning, Kyiv oblast’s governor Oleksiy Kuleba said.

The drone attack struck an infrastructure object which caught fire and one person has been injured after the attack, the governor said, reported The Kyiv Independent.

The rescue operation and fire extinguishing are ongoing and residents have been asked to remain in shelters, the governor said.

Russia says it called up more than 200,000 troops for Ukraine war

Russia has drafted more than 200,000 people to fight in Ukraine less than a fortnight after president Vladimir Putin announced the partial mobilisation of recruits (David Harding writes).

Defence minister Sergei Shoigu made the claim while speaking at a consultation with military figures.

He added that those volunteering to fight should not be turned away without a “serious reason” and that new units were receiving instruction at 80 training ranges and six training centres, according to a defence ministry posting on Telegram.

When Mr Putin announced the partial mobilisation last month – at the same time as advances by Ukraine in the south and east of the country – Shoigu announced that he planned to enlist 300,000 men with previous military experience to bolster Russia’s invasion.

Putin may pin blame for Russian losses on new commander

Vladimir Putin may try to pin the blame for future Russian losses in eastern Ukraine on a recently appointed commander, observers said.

Russian outlet RBK, citing sources within the Russian regime, reported on Monday that Lieutenant-General Roman Berdnikov had been installed as commander of the Western Military District, which had been operating in Kharkiv Oblast in recent months.

Mr Putin’s forces have lost almost all of their territory in Kharkiv to a Ukrainian counteroffensive launched at the start of September.

The Institute for the Study of War (ISW) said Mr Putin may have made the appointment in order to have a scapegoat for future losses in the region.

He may also be trying to redirect mounting criticism for the Russian loss of land in Kharkiv and the strategically significant Donetsk city of Lyman, the ISW said, adding that the fury has loosened the Kremlin’s hold on information in Russian nationalist circles.

A senior Pentagon official said she had no information to corroborate reports suggesting Russia might be moving tactical nuclear weapons by rail, and added the US military had not seen anything to change its own nuclear posture.

“I don’t have anything else but the open source reports,” said Laura Cooper, a deputy assistant secretary of defense focusing on Russia and Ukraine. The Pentagon closely monitors Russia’s nuclear forces, a core part of its mission since the Cold War.

Ms Cooper was responding to a report in The Times on Monday that said Russia had moved a train thought to be linked to a unit of the defence ministry that was responsible for nuclear munitions.

The report also said Nato had warned members that Vladimir Putin was set to demonstrate his willingness to use nuclear weapons by carrying out a nuclear test on Ukraine’s border.

Top allies of jailed Kremlin critic Alexei Navalny announced Tuesday that they would reestablish a network of groups across Russia, saying the time was right because the government has been weakened by questions about the war in Ukraine.

“The sleeping majority woke up, Putin himself woke him up,” said Ivan Zhdanov, former director of Navalny’s Foundation for Fighting Corruption, in a YouTube video posted by Navalny’s closest ally and top strategist, Leonid Volkov.

“It’s time for us to restore our network to fight mobilisation and war,” Mr Zhdanov said. Russia ordered a partial mobilisation on 21 September to beef up its troops in Ukraine.

Mr Zhdanov and Mr Volkov said the new network would operate as a “partisan underground,” and participants would remain anonymous for their safety.

Mr Navalny has been jailed in Russia since January 2021 on charges widely seen as politically motivated. Many of his close associates have left Russia, and his group’s political infrastructure – the anti-corruption foundation and a network of regional offices – was destroyed in 2021 after being labeled extremist.

The bodies of Russian soldiers were lying in the streets of Lyman on Tuesday following their comrades’ retreat that marked the latest defeat for Moscow even as Russia’s upper house of parliament rubber-stamped the annexation of Ukrainian regions.

Russian troops pulled back from the key eastern city over the weekend to avoid being encircled by Ukrainian forces. The city’s liberation gave Ukraine a key vantage point for pressing its offensive deeper into Russian-held territories.

The Ukrainian military collected the bodies of their comrades after fierce battles for control of Lyman, a key logistics and transport hub, but did not immediately remove those of the Russians.

“We fight for our land, for our children, so that our people can live better, but all this comes at a very high price,” said a Ukrainian soldier who goes by the nom de guerre Rud.

Lyman residents emerged from basements where they had hidden during the battle for control of the city and built bonfires for cooking. The city has had no water, electricity or gas since May.

Volodymyr Zelenskiy said Ukraine’s military had made major, rapid advances against Russian forces and freed from occupation dozens of towns in the south and east of the country.

“The Ukrainian army is advancing in quite a rapid and powerful manner in the south of the country within the context of the current defence operation,” Mr Zelensky said in his nightly video address earlier.

“This week alone, since the Russian pseudo-referendum, dozens of population centres have been liberated. These are in Kherson, Kharkiv, Luhansk and Donetsk regions all together.”

The decree formalised comments made by Mr Zelensky at the end of last week.

Speaking on Friday, he said: “He [Putin] does not know what dignity and honesty are. Therefore, we are ready for a dialogue with Russia, but with another president of Russia.”

Talks between the two leaders were floated in August by Turkish president Recep Tayyip Erdogan but were not agreed to by the warring parties.