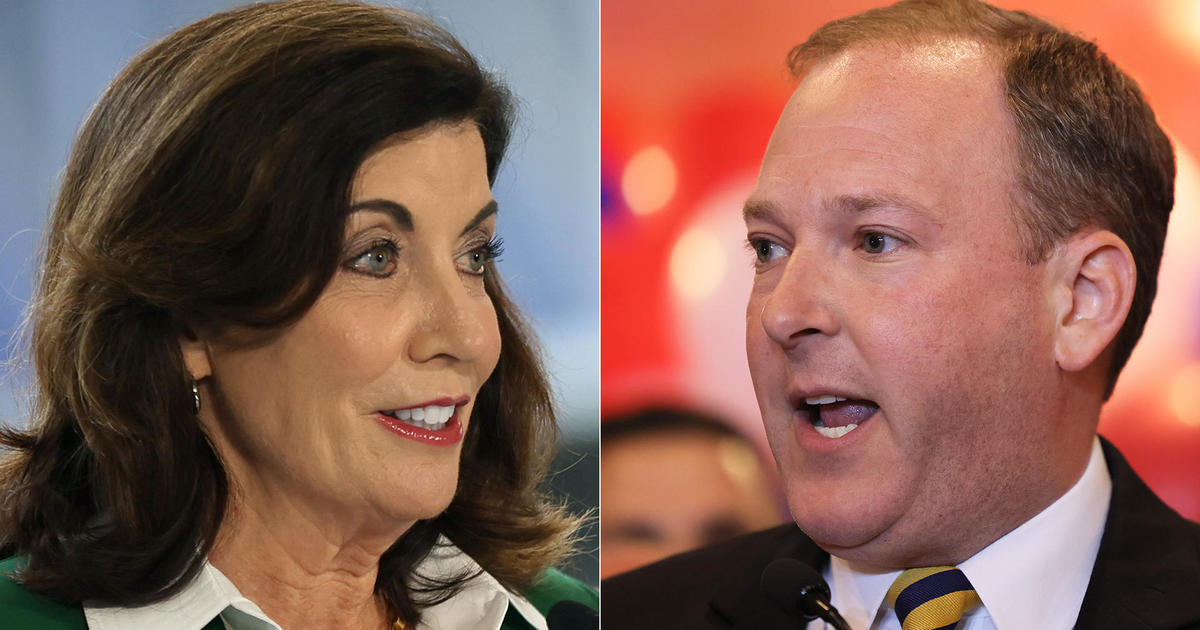 NEW YORK — Fifteen days before an election fought against a backdrop headline-grabbing crimes, Gov. Kathy Hochul and Congressman Lee Zeldin are each trying to convince New Yorkers they have the stuff to make the streets and subways safe again.

You can tell Election Day is getting close because both candidates for governor are in hyper-drive. Zeldin called Hochul’s new subway safety plan, “a day late and a dollar short.” Hochul said she has been working nonstop since she took office to make public safety her top priority, CBS2’s Marcia Kramer reported Monday.

“It has been my priority. It’s not a new development. It’s something we focused on with great intensity,” Hochul said.

The governor trotted out her bona fides as a long-time crimefighter, as she announced that under changes she enacted to the red flag laws, weapons have been kept out of the hands of nearly 2,000 people who have shown they could be a danger to themselves or others.

But the announcement didn’t happen in a vacuum.

“Time and again, one new pro-criminal law after the next, where was Kathy Hochul?” Zeldin said.

It came as she has been under near constant assault on bail laws and crime, from her Republican challenger, and as there have been almost daily headline-grabbing crimes above and below ground. One example is a disturbing surveillance video of a suspect who violently pushed a man onto the tracks last week at the subway station at Wyckoff and Myrtle avenues in Brooklyn.

“She wants to half-ass it,” Zeldin said.

Zeldin slammed the new subway crime plan Hochul and Mayor Eric Adams announced two days ago. He said instead of putting more cops on trains through what he called “forced overtime,” she should help the city hire more cops. He also derided her plan to open new hospital beds for people who psychiatric problems.

“While Gov. Hochul is focused on combating gun violence and strengthening public safety, Lee Zeldin’s only solution is putting more guns on our streets. Zeldin has zero credibility and he can’t be trusted to lead New York state,” Harvey said.

At her Albany news conference, Hochul faced a barrage of questions about her record. She said she has been fighting crime since she took office. She pointed to the news conference she had with Mayor Adams last January to announce more subway safety measures.

“I’m not letting the political theater out there affect what we’ve done. This is not a new issue for me and I think that’s well established,” she said.

The candidates will face each other for the first and only time during a debate on Tuesday night. Early voting starts Saturday.