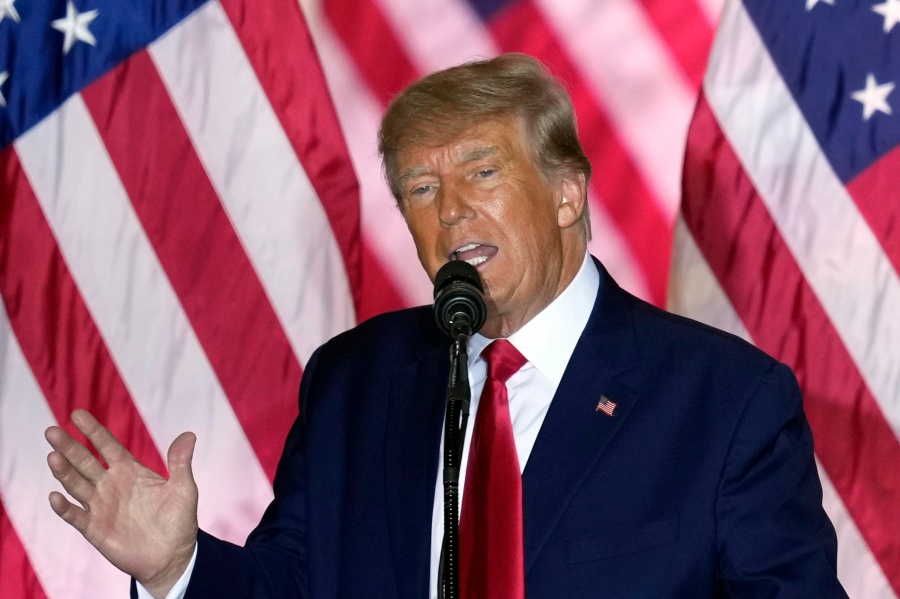 WASHINGTON (AP) — Lawyers for former President Donald Trump found at least two items marked as classified during a recent search of a storage unit in West Palm Beach, Florida, and have provided them to the FBI, according to a published report Wednesday.

The Washington Post, citing anonymous sources, reported that the items were discovered by an outside team brought in by Trump’s representatives to search his other properties for any additional classified materials. The nature of the classified materials was not immediately clear, but the storage unit in which they were found had been used to hold items from an office in northern Virginia used by Trump staffers after he left office, the newspaper said.

The FBI recovered roughly 100 documents marked as classified during an Aug. 8 search of Trump’s Palm Beach estate, Mar-a-Lago. That’s on top of 37 documents bearing classification markings that Trump lawyers retrieved from the home during a June visit, as well as 15 boxes containing about 184 classified documents recovered in January by the National Archives and Records Administration.

The possibility that the Justice Department had not yet recovered all classified materials has existed for months.

The FBI’s August search of the home came after investigators developed evidence indicating that additional sensitive documents remained there, even though Trump representatives had certified that all classified documents requested in a Justice Department subpoena had been located and returned.

After a federal judge pressured the Trump team to demonstrate its full compliance with the subpoena, the newspaper said, it hired an outside firm to search properties including Trump’s golf club in Bedminster, New Jersey, as well as Trump Tower in New York.

A spokesman for Trump, responding to reports about an outside firm’s search for classified materials, said in a statement that “President Trump and his counsel continue to be cooperative and transparent, despite the unprecedented, illegal, and unwarranted attack against President Trump and his family by the weaponized Department of Justice.”

Spokesman Steven Cheung did not respond to a follow-up phone call about subsequent reporting indicating that a search of the storage unit had turned up two items with classification markings.