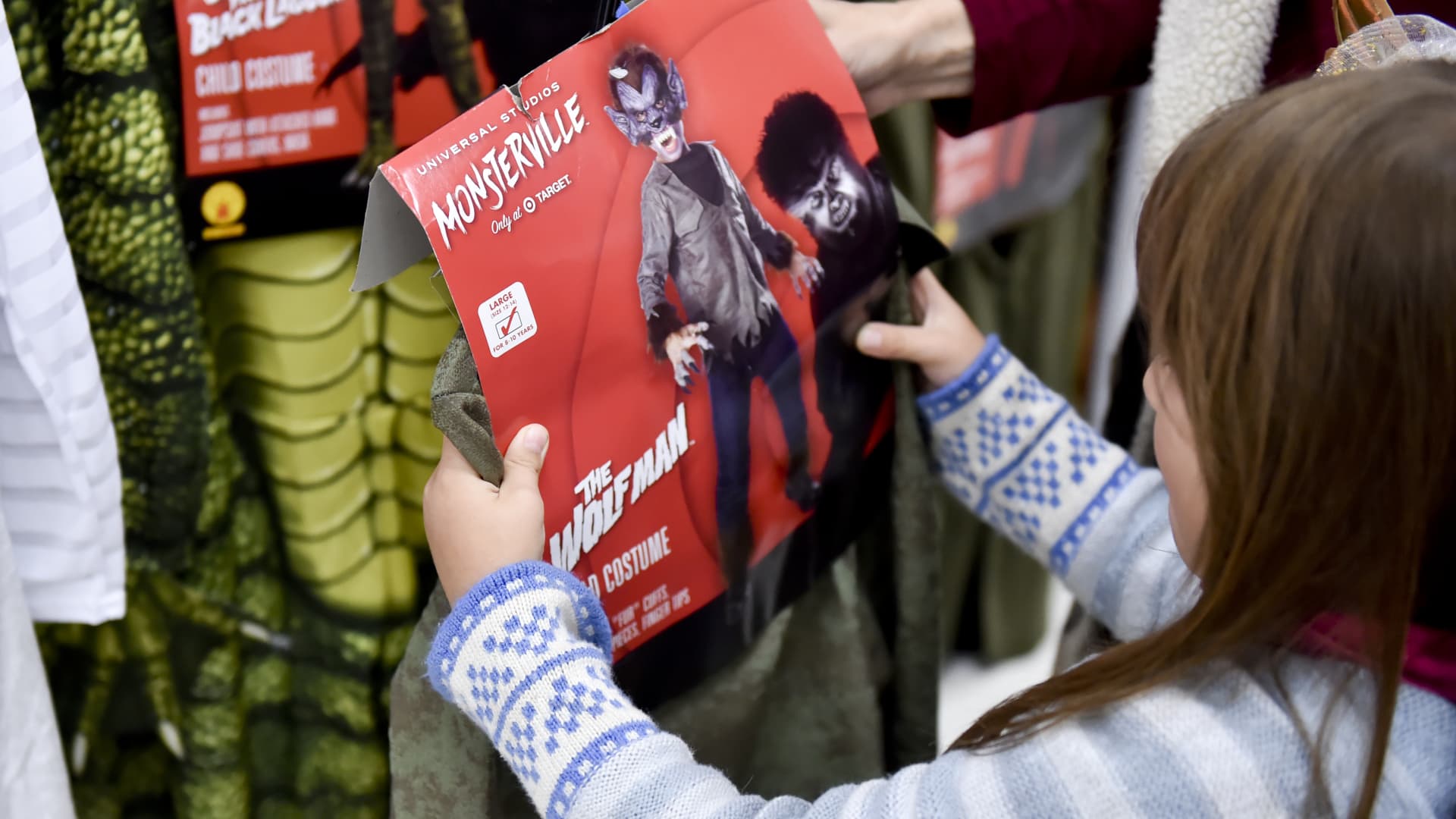 In the past few weeks, Craig Cislo dug out the spray-painted tombstones from his attic, scoured websites for a giant animated reaper and convinced his teenage son to dress as a bush to spook trick-or-treaters.

Cislo, 43, of Dallas, plans to spend about $700 for Halloween to step up his family’s front yard decorations. He has noticed more neighbors are joining in too, with large inflatables, animatronics and even an elaborate display inspired by “The Walking Dead.”

“My wife and I joke — because we take a daily walk — that we have competition this year,” he said.

As retailers brace for a lackluster holiday season, many are planning to pump up early sales in the crucial quarter by dangling a wider assortment of Halloween merchandise. Even if consumers are cutting back on spending elsewhere, they say Halloween gives people a chance to get into the holiday spirit with relatively inexpensive celebrations before Thanksgiving and Christmas.

Home Depot and Lowe’s stocked up on a wide range of spooky lawn ornaments, including giant mummies and skeletons. Target executives expressed high hopes for sales of costumes, haunted house cookie building sets and other Halloween merchandise, even after cutting the company’s profit outlook twice. And Party City, which sells costumes, balloons and bags of candy, plans to hire about 20,000 seasonal employees before the Oct. 31 occasion.

The push around Halloween comes as more people return to in-person gatherings. Participation is expected to return to pre-pandemic levels this year, with nearly 70% of Americans planning to celebrate, according to the National Retail Federation’s annual survey.

That’s expected to lift total Halloween spending to a record $10.6 billion, a jump from last year’s $10.1 billion, the survey found. On average, consumers plan to spend $100 for candy, decor, cards and costumes.

“This is one of the reasons we continue to see such strength in our seasonal categories, which we expect will continue in the back half of the year,” she said on the company’s earnings call in August.

Herman the 12 foot tall skeleton stands amongst his fellow skeletons in Middletown, Maryland on October 20, 2020. The Ferrone family purchased a 12-foot-tall skeleton from Home Depot, the hottest halloween decoration this year. It was stolen from their yard, and they petitioned the company for a replacement.

For Home Depot and Lowe’s, spring remains the most lucrative time of year. But over the years, the home-improvement companies have bulked up on their Halloween and Christmas product lines.

In 1987, Home Depot added Christmas trees. That was followed by Christmas decor in 2005 and Halloween merchandise in 2013. Then it saw an opportunity to expand seasonal sales in the fall, said Lance Allen, the company’s senior merchant of holiday decor.

The retailer’s team of merchants sought inspiration by going to haunted houses and watching classic ’80s Halloween movies and Tim Burton movies. They also roamed trade shows, where they spotted a display of a giant skeleton torso that would inspire one of the company’s most popular Halloween products.

The skeleton at the trade show cost thousands of dollars, so Home Depot designed a 12-foot skeleton that costs $299 and debuted last year. It became a social media sensation and sold out.

When Home Depot’s “Skelly” skeleton returned this year, the first shipments sold out the first day they became available on July 15, Allen said. The retailer has since been getting replenishments.

Other Halloween sales items include a new “Hocus Pocus”-themed inflatable that goes for $149 and an eight-foot animated reaper that recites scary phrases while moving its head and mouth costs $249. The company also added a 15-foot towering phantom — its tallest decoration yet — that sells for $399.

Rival Lowe’s rolled out its answer to the skeleton this year: A 12-foot mummy that sells for $348.

Lowe’s also expanded its Halloween array of goods by more than 20% this year and dedicated more space in stores for larger outdoor merchandise. Decorations with scarier themes have been popular, such as a life-size Freddy Krueger and a giant mummy, along with staples like scarecrows, hay bales and pumpkins, said Bill Boltz, executive vice president of merchandising.

Both Home Depot and Lowe’s say Halloween sales are going well, but they do not break out sales figures in the category.

Lowe’s debuted a 12-foot mummy this year to tap into customers’ enthusiasm for Halloween. It is exclusive to the retailer and sells for $348.

It is too early to say exactly how Halloween sales will play out this year. Merchandise is already in stores, but sales tend to gain momentum throughout October as families gear up to celebrate. Major retailers will give sales updates in November when they report quarterly earnings.

Seasonal items, however, do appear to be drawing consumer spending.

In late September, Costco said on an earnings call that early sales of Halloween merchandise were going well, and Walmart CEO Doug McMillon said the company is stocking up on spooky items, such as inflatables and outdoor decor, even as it cancels other orders and copes with a glut of unwanted merchandise.

Boltz of Lowe’s said higher prices of food, rent and other essentials do not appear to be scaring customers away from spending.

Meanwhile, back in Dallas, Cislo is still deciding which new animatronic he’ll buy for his lawn. He also plans to get supplies and build a tunnel that trick-or-treaters will have to walk through to reach the porch and get their treat: a chocolate bar or a lollipop.

He said he wants to create the kind of experience he enjoyed when he dressed up in costumes and trick-or-treated as a kid in upstate New York. The best houses, he recalled, gave out full-sized candy bars or had extra spooky decorations.