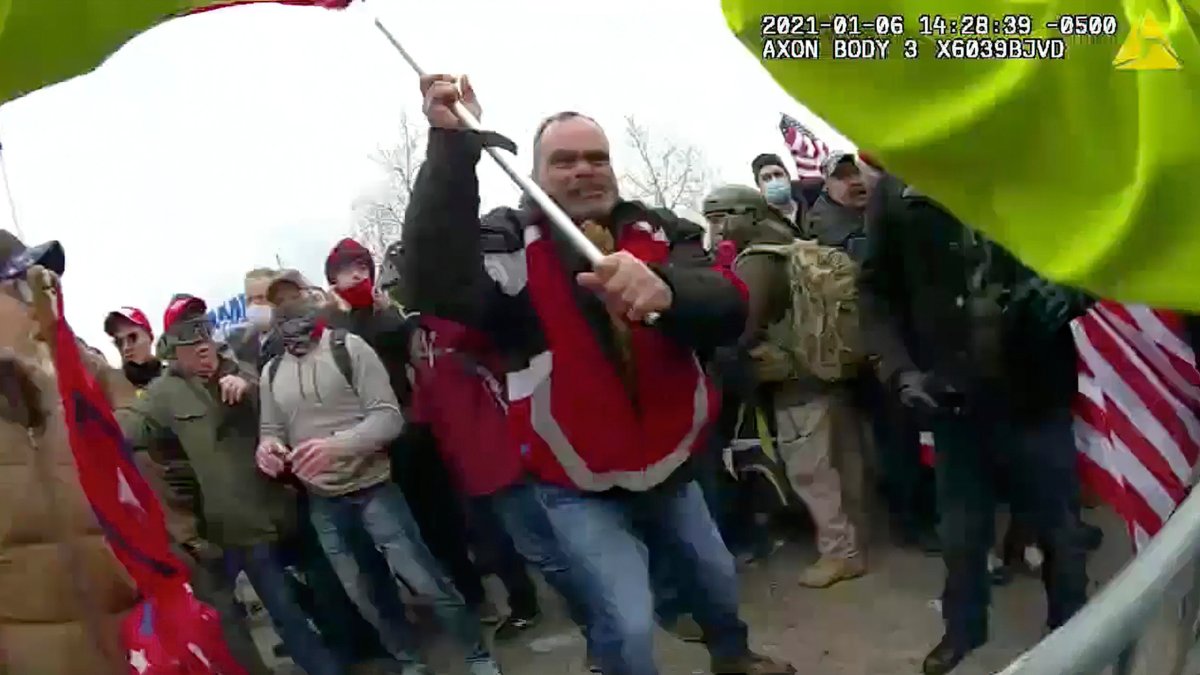 A retired New York City police officer charged with assaulting a police officer during the U.S. Capitol riot testified Thursday at his trial that he was trying to defend himself against a “rogue cop” who punched him in the face.

Thomas Webster, who took the witness stand on the third day of his federal trial, said it felt like he was hit with a hammer or a freight train when Metropolitan Police Department officer Noah Rathbun reached out with an open left hand and struck the right side of Webster’s face.

“It was painful, and I was seeing stars,” Webster said. “It was a hard hit, and all I wanted to do was defend myself.”

Rathbun, one of dozens of officers injured at the Capitol on Jan. 6, 2021, testified Wednesday that he didn’t punch or pick a fight with Webster.

A grand jury indicted Webster on six counts, including a charge that he assaulted Rathbun with a dangerous weapon, a metal flag pole. He isn’t accused of entering the Capitol on Jan. 6.

The trial is scheduled to resume Friday with more testimony from Webster, who was wearing a bulletproof vest and carrying a U.S. Marine Corps flag on a metal pole when he approached the Capitol on Jan. 6.

Video from Rathbun’s body camera shows that the officer touched Webster’s chest and shoved his face after the New York man slammed a bike rack at him. Rathbun said he was trying to move Webster back from a security perimeter that he and other officers were struggling to maintain behind a row of metal bike racks.

Webster, 56, said he believed Rathbun was about to come after him and recalled thinking, “He’s gone rogue.”

“He’s acting in a manner unlike other police officers, and I’m concerned for my safety,” he said.

Rathbun testified that he started choking when Webster grabbed his gas mask, pressing the chin strap against the officer’s throat.

“That’s not a position that anyone wants to be in,” Rathbun said.

Webster said he grabbed Rathbun by the gas mask because he wanted the officer to see his hands.

Webster’s trial is the first among dozens of cases in which Capitol riot defendants are charged with assaulting police.

Two other defendants testified at their trials. Dustin Byron Thompson, an Ohio man who was convicted by a jury of obstructing Congress from certifying Joe Biden’s presidential victory, said he was following orders from then-President Donald Trump. A judge hearing testimony without a jury acquitted Matthew Martin, a New Mexico man who said outnumbered police officers allowed him and others to enter the Capitol through the Rotunda doors.

Webster’s lawyer told jurors during the trial’s opening statements on Tuesday that Rathbun “started this whole thing” by punching Webster. Webster said Rathbun made a hand motion that he perceived as an invitation to fight.

“It was shocking to see that,” Webster said. “I’ve never witnessed a cop doing something like that.”

Two more men were arrested for their alleged roles in the Capitol riot in January, both with NYC ties: One is a retired NYPD officer who once guarded City Hall and Gracie Mansion, the other is a GOP party official from Queens. NBC New York’s Jonathan Dienst reports.

Webster said he became upset when he saw others in the crowd who were injured, including a woman with blood on her face, and approached the line of police officers to learn more. Rathbun’s body camera captured Webster shouting profanities and insults at the officer before they made any physical contact.

“I was voicing my First Amendment right,” Webster said.

Webster said he went to the Capitol after hearing Trump’s speech to “petition” Congress to “relook” at the results of the 2020 presidential election but not to disrupt the joint session for certifying the Electoral College vote.

“It was a unique moment in history,” he said.

During her cross-examination of Webster, Justice Department prosecutor Katherine Nielsen showed him video images of Webster swinging the flag pole in Rathbun’s direction, charging at him and then on top of him after tackling him. She asked Webster if he saw fear in his face in any of those images.

“Yes, because I got hit,” he replied.

Rathbun reported a hand injury from a separate encounter with a rioter inside the Capitol’s Rotunda. He didn’t report any injuries caused by Webster, but jurors saw photos of leg bruises that Rathbun attributed to his confrontation with the retired officer.

Webster, who lives near Goshen, New York, retired from the NYPD in 2011 after 20 years of service. His department service included a stint on then-Mayor Michael Bloomberg’s private security detail. He served in the U.S. Marine Corps from 1985 to 1989 before joining the NYPD in 1991.