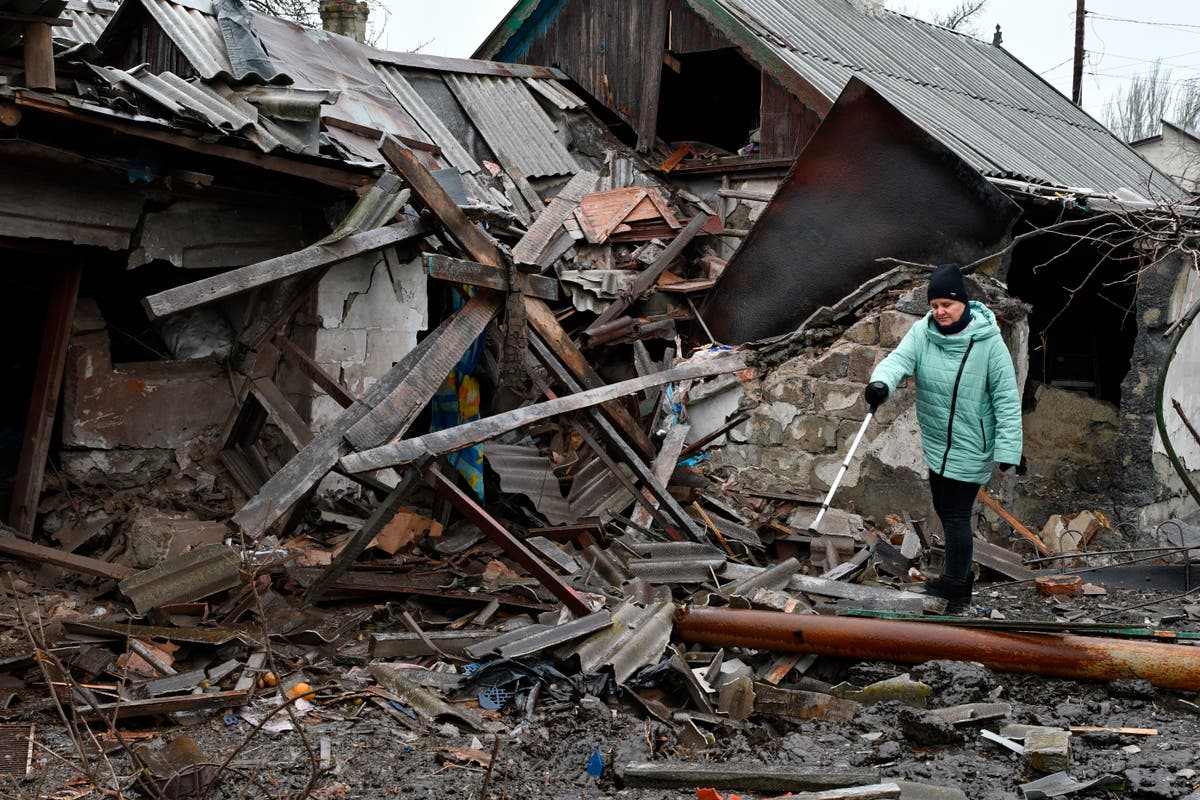 Threat of nuclear war is rising but Russia has not ‘gone mad’, claims Vladimir Putin

The rocket launchers are next to spent nuclear fuel storage units near the plant’s sixth reactor, it said, and are likely to be used to strike cities on the opposite side of the Dnipro River, using the reactor and fuel storage as a “shelter” from return fire, according to Energoatom.

Russia’s move violated conditions for nuclear and radiation safety, the company said in its statement, which was backed by several Ukrainian ministers.

The risk of a nuclear meltdown is greatly reduced as none of the reactors is operating, but experts say a release of radiation is still possible, it’s been reported.

Meanwhile, Russia has revived its use of Iranian drones in the war in Ukraine’s east this week, the British defence ministry says.

Russian forces stepped up their military offensive in Ukraine’s east and shelled the entire frontier with the relentless attacks continuing for most of the week.

The fiercest fighting has raged near the towns of Bakhmut and Avdiivka, the region’s governor Pavlo Kyurylenko said.

A Russian opposition politician has been sentenced to eight-and-a-half years in prison on charges of spreading “fake information” about the army.

Ilya Yashin was tried and found guilty over a YouTube video in April in which he discussed evidence uncovered by Western journalists of Russian atrocities in Bucha, near Kyiv, and cast doubt on the official Moscow version that such reports had been fabricated as a “provocation” against Russia.

In a statement to the court, Mr Yashin appealed directly to Vladimir Putin, describing him as “the person responsible for this slaughter” and asking him to “stop this madness”.

“Looking at the consequences of this monstrous war, you yourself probably realise what a grave error you committed on February 24. Our army isn’t being greeted with flowers. They call us punishers and occupiers. The words ‘death’ and ‘destruction’ are now firmly associated with your name,” he said.

“You have brought terrible misfortune to the Ukrainian people, who will probably never forgive us.”

Since the start of the conflict, Russia has moved to quash almost all forms of dissent, with most of its prominent opposition figures either in jail or exile.

And the Kremlin passed new legislation this year allowing jail terms of up to 15 years for disseminating false information about the military.

“Please don’t fall into despair and don’t forget that this is our country,” he said in his final statement. “It is worth fighting for. Be bold, don’t give way to evil, and resist.”

The statement raises fears that the plant could be used to further attack Ukrainian territory, and it also heightens radiation dangers.

Energoatom, Ukraine’s nuclear energy company, said several of the war machines had been positioned near one of the power plant’s six nuclear reactors, in a move it said violated “all conditions for nuclear and radiation safety”.

It said the systems are at new “protective structures” the Russians secretly built.

Although the risk of a nuclear meltdown is greatly reduced because all six reactors have been shut down, experts have said a dangerous release of radiation is still possible, the Associated Press reports.

In an update on Friday morning, the Ministry of Defence said there had been reports of attacks by Iranian-made drones for the first time in three weeks.

It said: “These events remain to be verified, but it is likely that Russia exhausted its previous stock of several hundred Shahed-131s and 136s and has now received a resupply.”

Ukraine‘s finance minister says crucial Western financial support is “not charity” but “self-preservation” in the fight to defend democracy as his country deals with growing costs to repair electrical and heating infrastructure wrecked by Russian attacks.

Serhiy Marchenko also told The Associated Press in an interview Thursday from Kyiv that he believes European Union officials will sort out a dispute with Hungary that has blocked a key 18 billion-euro ($18.97 billion) aid package and would cover much of Ukraine’s looming budget gap.

Marchenko said financial support for Ukraine is tiny compared to what developed countries spent to combat emergencies like the global financial crisis of 2008 and the COVID-19 pandemic.

And that the money bolsters freedom and security far beyond his country’s struggle, he added.

“It’s not charity to support Ukraine,” Marchenko said. “We are trying to protect freedom and democracy of all (the) civilized world.”

Speaking late on Thursday night in a video address, Ukraine’s president Volodymyr Zelenksy has paid tribute to policemen who were killed by landmines in Kherson.

Zelenksy said: “This is perhaps even fiercer and more devious than missile terror. “For there is no system against mines that could destroy at least part of the threat as our anti-aircraft systems do.”

The Ukrainian president accused Russian forces of leaving explosives including tripwire mines, mined buildings and cars and landmines in places they then abandoned due to pressure from Ukrainian forces.

Russian President Vladimir Putin said today that the West’s desire to maintain its dominance on the world stage was increasing the risks of conflict.

“The potential for conflict in the world is growing and this is a direct consequence of the attempts by Western elites to preserve their political, financial, military and ideological dominance by any means,” Putin said.

The Russian leader was speaking in a video message to a summit of defence ministers from the Shanghai Cooperation Organisation and a group of ex-Soviet countries that was published by the Kremlin.

He also accused the West of “exploiting” Ukraine and using its people as “cannon fodder” in a conflict against Russia.

Putin has repeatedly cast the war in Ukraine – which Moscow calls a “special military operation” – as a conflict between Russia and the West, criticising those who have provided military and financial backing to Ukraine.

Kyiv, European countries and Washington say Moscow used the pretext of security concerns to launch a cynical war of aggression against its pro-European neighbour in an attempt to seize swathes of territory and topple President Volodymyr Zelenskiy.

Five civilians were killed and a further two injured in Russian attacks on the Donetsk oblast yesterday.

Pavlo Kyrylenko, governor of the Donetsk oblast, confirmed the casualties in an update this morning.

Three people were also killed in Bakhmut, one person in Netailovo and one in Toretsk following Russian attacks.

Russia has revived its use of Iranian drones in the Ukraine war, with the fresh use seen in the besieged country’s east this week, the British defence ministry said today.

“For the first time in three weeks, there have been reports of attacks by Iranian-provided one-way attack (OWA) uncrewed aerial vehicles (UAVs),” the ministry said.

It is likely that the Kremlin has exhausted its previous stock of several hundred Shahed-131s and 136s and has now received a resupply.

The British defence ministry said that the Ukrainian General Staff reported shooting down 17 UAVs, including 14 Shahed-136s on Tuesday, followed by the use of Iranian-provided OWA UAVs targeting Zaporizhzhia and Dnipro oblasts on Wednesday this week.

“The last previously reported shooting down of Iranian Shahed-136s in Ukraine was on 17 November 2022. If verified, it is likely that Russia has recommenced attacks with newly delivered OWA UAV systems,” the MoD said.

The Ukrainian general staff said its forces had attacked Russian positions and troop assembly points in at least half a dozen towns in the south of Ukraine, in a war update this morning.

Russian losses amounted to about 240 wounded, with three ammunition depots and about various military equipment destroyed, it added.

The United States is planning to impose new sanctions against Russia and China today in a direct rebuke to Moscow for using Iranian drones in its war against Ukraine, two US officials said.

The sanctions are expected to target a number of Russian defense industry entities involved in the transfer of Iranian drones to Russia, the officials said.