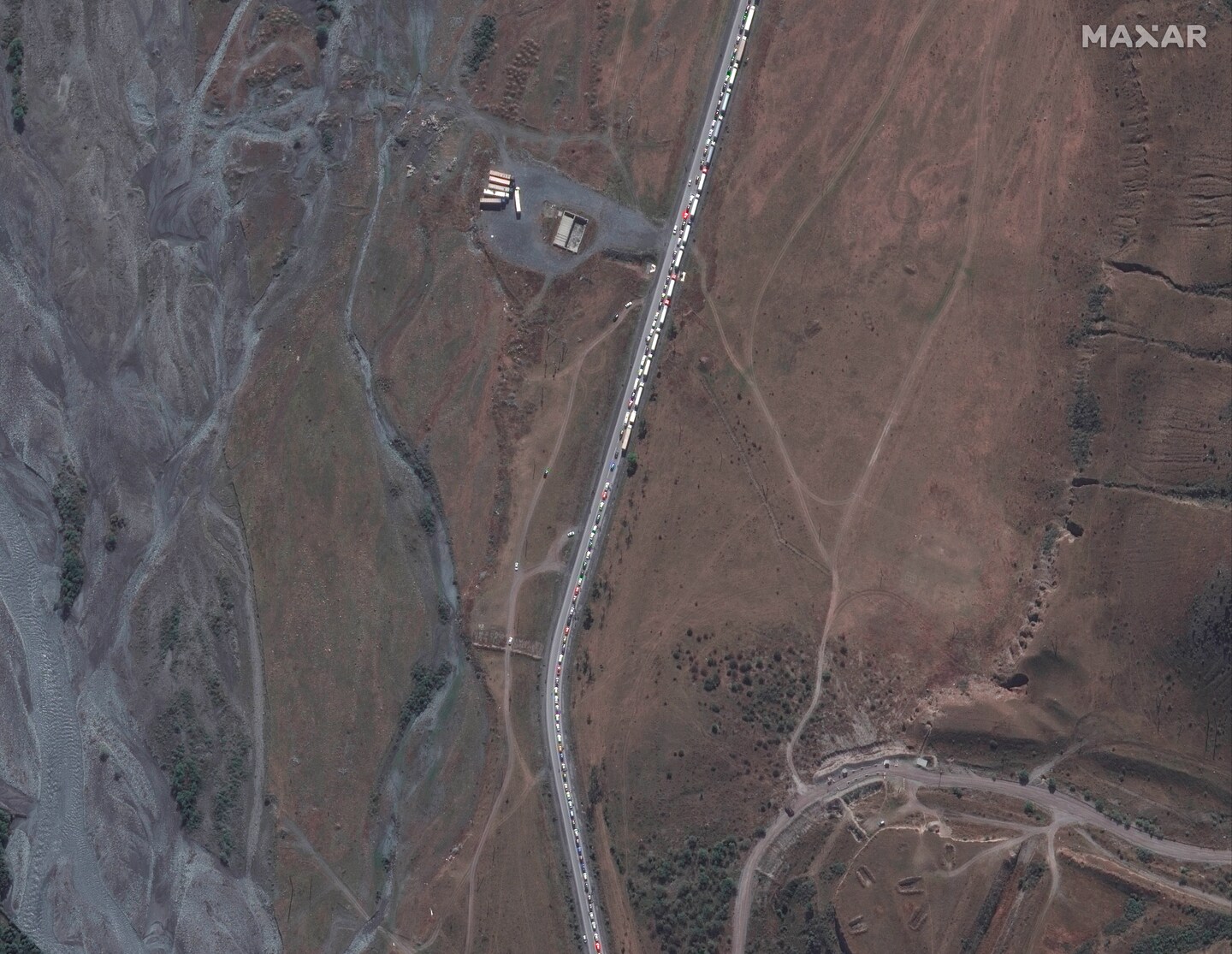 Near the border with Georgia, the line of cars and trucks trying to leave Russia stretched for miles after President Vladimir Putin’s partial mobilization order, satellite images show.

The traffic jam formed at a crossing point on the Russian side of the border, according to U.S.-based firm Maxar Technologies, which released the photos on Monday. Separate aerial photos from the company also show vehicles snaking into another long line near Russia’s border with Mongolia.

What does Putin’s partial military mobilization mean for Russia and Ukraine?

Many Russians have also lined up at the country’s borders with Finland and Kazakhstan since last week, when Putin announced a call-up of hundreds of thousands of reservists to fight in the Kremlin’s ailing war in Ukraine. It marks Russia’s first military mobilization since World War II.

Soon after the speech, tickets sold out to the few cities that still have direct flights from Russia and Google searches rose for queries like “how to leave Russia.”

As mobilization begins in Russia, sold-out flights, protests and arrests

Confusion over who could be summoned has also pushed thousands to flee, along with fears that Russia’s borders could shut to men of military age.

They don’t have many options if they don’t want to deploy to Ukraine. Russian flights in E.U. airspace are banned and Baltic nations closed their land borders. In recent days, piles of abandoned bicycles near border posts appeared in social media footage.

Russian news agency TASS said more than 5,000 cars were waiting for hours at the border with Georgia on Tuesday.

In Kazakhstan, President Kassym-Jomart Tokayev said Tuesday his country would talk with Moscow about the influx and sought to “maintain agreement with neighboring countries.” He called it a “difficult situation” but said there was no reason to panic after tens of thousands of crossings by Russian citizens were reported in recent days.

Finnish authorities said they saw a nearly 80% increase in entries from Russia after the mobilization, but the Finnish Border Guard also said Tuesday that “the majority of arrivals move on to other countries.”

The Kremlin has described reports of an exodus as overblown, despite growing signs of a backlash to the mobilization.

Riot police have arrested hundreds of protesters, as rights groups worry the order will disproportionately round up men in remote or impoverished parts of the country. And at an enlistment station in the Irkutsk region, one man shot and wounded a military recruiter on Monday.

Mary Ilyushina contributed to this report.

War in Ukraine: What you need to know

The latest: Russian President Vladimir Putin announced a “partial mobilization” of troops in an address to the nation on Sept. 21, framing the move as an attempt to defend Russian sovereignty against a West that seeks to use Ukraine as a tool to “divide and destroy Russia.” Follow our live updates here.

The fight: A successful Ukrainian counteroffensive has forced a major Russian retreat in the northeastern Kharkiv region in recent days, as troops fled cities and villages they had occupied since the early days of the war and abandoned large amounts of military equipment.

Annexation referendums: Staged referendums, which would be illegal under international law, are set to take place from Sept. 23 to 27 in the breakaway Luhansk and Donetsk regions of eastern Ukraine, according to Russian news agencies. Another staged referendum will be held by the Moscow-appointed administration in Kherson starting Friday.

Photos: Washington Post photographers have been on the ground from the beginning of the war — here’s some of their most powerful work.

How you can help: Here are ways those in the U.S. can help support the Ukrainian people as well as what people around the world have been donating.

Read our full coverage of the Russia-Ukraine crisis. Are you on Telegram? Subscribe to our channel for updates and exclusive video.

Cardano Price Forecast – Can ADA Reach an All Time High in 2023?