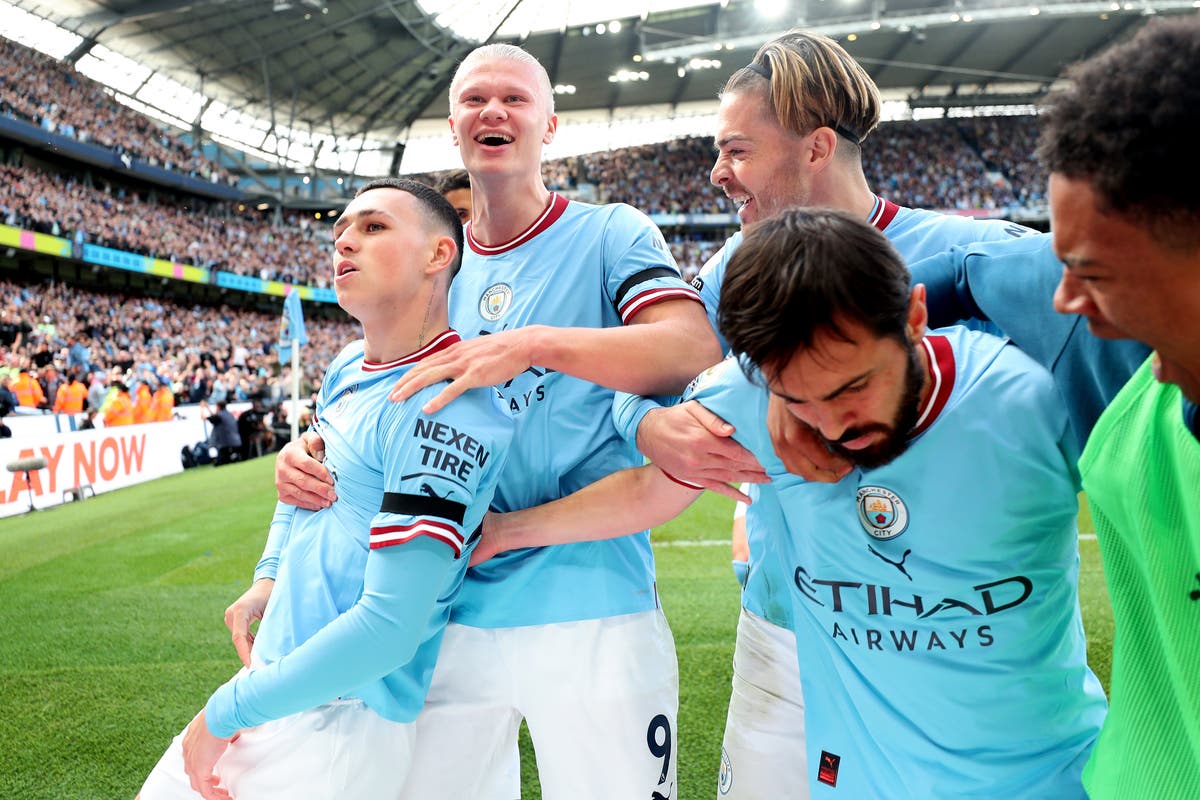 When Pep Guardiola arrived in the Premier League, there was still something of a power struggle in this city. It was tilting in Manchester City’s favour, no doubt, but not decisively. Seven years, four league titles and a slew of broken records later, the most damning thing about derby day destructions like these for Manchester United is that they do not come as much of a surprise any more and, if anything, they are all the more predictable now that their rivals have a player like Erling Haaland.

Haaland’s third consecutive hat-trick in home league games – the first player in the Premier League era to achieve such an astonishing feat – set up a 6-3 win. Phil Foden also hit the first three derby goals of his career and the margin of victory was only softened by two late Anthony Martial strikes. The scale of City’s dominance might have been expected but will be no less painful for Erik ten Hag, who saw United’s mini-revival of late extinguished in emphatic style.

This was a performance of champions from the champions and an ominous sign for the rest of the league, even if City remain one point off the top. If there is a consolation for United, it is that few teams could live with Guardiola’s side in this rampant form. Haaland alone is enough to handle. It is now 17 goals in 10 games for the Norwegian. In the league, he is only nine behind matching last season’s Golden Boot total. You shudder to think of the records he could set come May. It must be particularly difficult for United to take.

As revealed earlier this week by a documentary in Haaland’s native Norway, they did not even make the top seven potential destinations as his next stop after Borussia Dortmund. United are on the path to change that, to make themselves the most desirable club in the world for its best young players again. On this evidence, however, there is a long way to go before they are even the most desirable in their own city.

It is strange to think now that team news whispers brought cause for some pre-match City jitters. A calf injury ruled out Rodri, depriving the champions of the one player who has done more than any other to define the more controlled gameplan of Guardiola’s recent years. With Kalvin Phillips also sidelined, there was no like-for-like replacement. Ilkay Gundogan played the holding role, protecting an unfamiliar centre-back partnership of Nathan Ake and Manuel Akanji. Ruben Dias was only a substitute.

With United welcoming Marcus Rashford back from a muscular problem to start up top, one prominent television pundit with United connections saw the line-ups and claimed that “this lot” were “getting done”.

The problem for Gary Neville, though, was that while United for now remain a side reliant on the form and fitness of individuals, City are a devastating collective, whatever the components. And once kick-off came, that faint United optimism was dashed within eight minutes.

In fact, United were lucky it lasted that long.

During an early goalmouth scramble, Scott McTominay threw himself in front of a Haaland header and a Bernardo Silva shot, with David de Gea denying Kevin De Bruyne in between. United had survived but already looked scared of the onslaught that awaited them.

Foden set things in motion, taking advantage of United’s timidity to turn up unmarked inside their penalty area and sweep home a Bernardo cross that was dragging slightly behind him. It was a spectacular finish.

The second did not immediately follow but could have, such was City’s dominance. Foden and Jack Grealish – enjoying perhaps his best performance in a City shirt – were borderline unplayable and both of their opposing full-backs were booked inside the opening 21 minutes. Grealish deserved a goal and was unfortunate to see a goalbound shot blocked by Lisandro Martinez. Gundogan struck the outside of the post from a free-kick. Soon, surely, the dam would break.

And when it did, Ten Hag will be disappointed that it did in such a preventable way. In the month since United’s last league outing, they perhaps should have come up with a better way to defend Haaland’s set-piece threat than by having him marked by Christian Eriksen. Haaland shrugged off the Dane, instead putting himself up against the more substantial presence of McTominay. He still beat him all ends up, powering a header in at close range from De Bruyne’s corner.

That pair would combine again for the third, but this goal was anything but easily preventable. From the vantage of the Etihad press box, right behind De Bruyne as he motioned to play the pass, it looked like an incredibly difficult one to pull off. With four defenders between him and Haaland, it was. But combining one’s passing range with the other’s power and dexterity and having both in the same team creates new angles that previously seemed impossible, a whole new geometry.

De Bruyne whipped his pass around United’s bedraggled defence. Haaland stuck out his long left leg to meet it, sneaking the ball in at the far post. It was, once again, a remarkable goal.

And even though it was now a case of damage limitation for United, they could not even hold out until half time. The fourth came on a counter-attack that saw De Bruyne brought down unceremoniously midway through. Advantage was played and Haaland picked up where his team-mate had left off, finding Foden at the far post with De Bruyne-esque accuracy.

Antony pulled one back once play resumed, firing from range to offer United brief hope of a respectable scoreline, but that too was short lived.

Haaland completed his hat-trick with a finish not dissimilar from Foden’s first, sweeping in unopposed after a cross from the left. The Etihad celebrated with a stadium-wide Poznan, in which Haaland’s father Alfie participated. Remarkably, his son now has as many Premier League hat-tricks as Cristiano Ronaldo, an unused substitute here. He has played eight games compared to Ronaldo’s 232.

Foden’s first-ever three-goal haul quickly followed, sneaking past the attentions of a United backline that was all at sea.

Victor Lindelof, on as a substitute for the injured Rapahel Varane, almost did a double take, seemingly forgetting that the City winger had slipped off his shoulder to move through one-on-one with De Gea.

Antony Martial added two in consolation, including a late penalty that was celebrated with half-ironic cheers by a sparsely-populated away end. It meant United had won the second half, if absolutely nothing else.