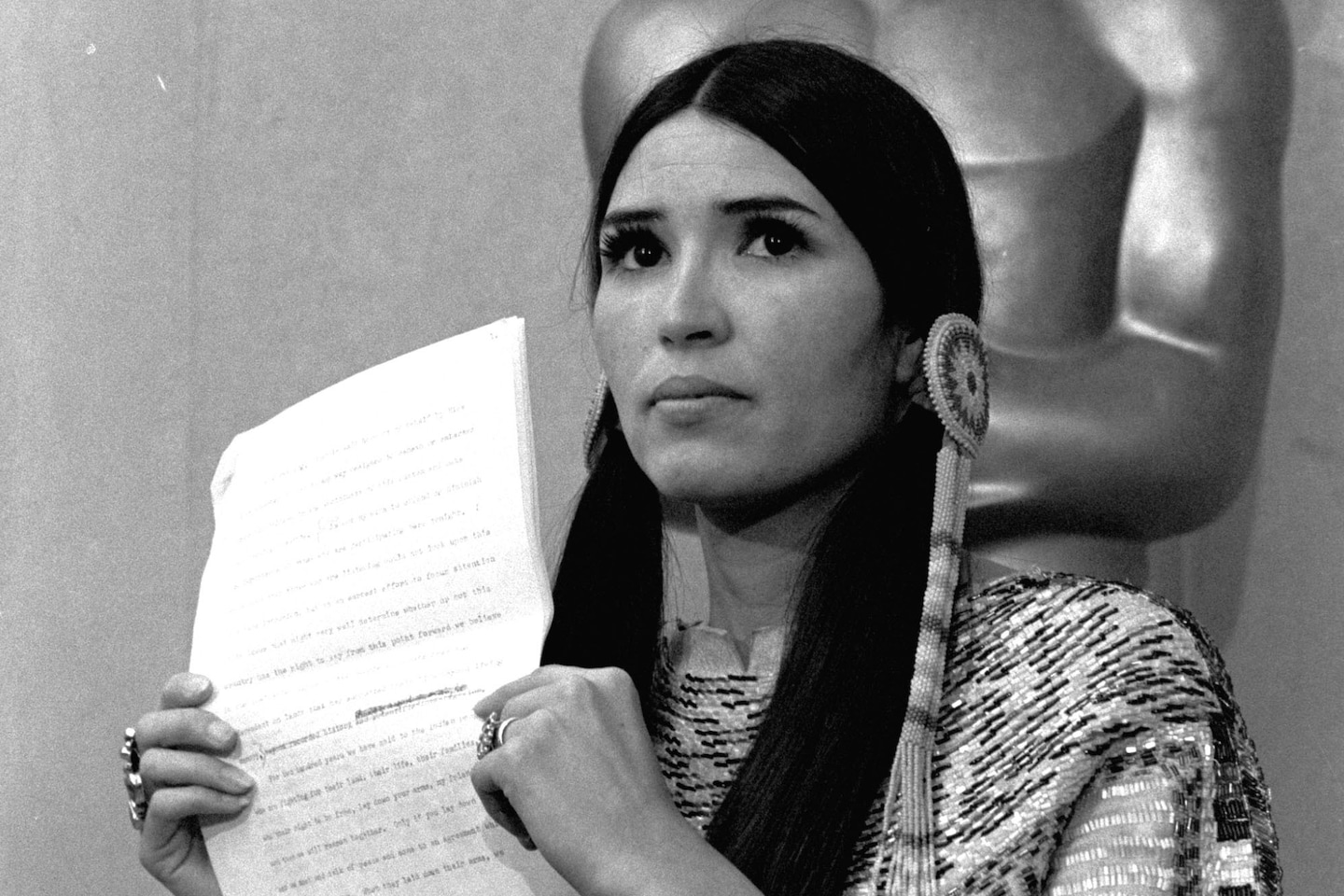 Sacheen Littlefeather, a Native American actress and activist who made Oscars history in 1973, declining the best actor prize on behalf of Marlon Brando and jolting the Academy — and an estimated 85 million television viewers — with her speech condemning the mistreatment of American Indians, died Oct. 2 at home in Marin County, Calif. She was 75.

A family statement said she died peacefully, surrounded by loved ones. It did not list a cause of death. Ms. Littlefeather was diagnosed in 2018 with breast cancer that spread to her right lung, according to an article in A.frame, the digital magazine of the Academy of Motion Picture Arts and Sciences.

For decades, the Oscars largely steered clear of politics and social issues, acquiring a reputation as Hollywood’s biggest night while serving as a glitzy showcase for the movies and the people who made them. Ms. Littlefeather’s speech helped change that, ushering in a new era in which actors and filmmakers increasingly used their acceptance speeches to call out injustice, criticize politicians and urge the industry to diversify its ranks and better represent women and people of color.

The 26-year-old Ms. Littlefeather was the first Native American woman to appear onstage at the Oscars, according to the Academy. Addressing the audience in moccasins and a buckskin dress, she explained that Brando, an activist for Native American rights, had written “a very long speech” but that she was unable to deliver it “because of time.” She later said that the show’s producer, Howard W. Koch, had threatened to have her arrested if she spoke for more than a minute.

Onstage, she went on to call out offensive cliches of American Indians perpetuated on film and television, and drew attention to “recent happenings at Wounded Knee,” where a dispute over corruption at the Pine Ridge Indian Reservation in South Dakota led to a standoff with federal authorities.

Her speech was interrupted once by a mix of boos and applause, and she later recalled looking out at the overwhelmingly White audience — “a sea of Clorox,” as she put it — and seeing the tomahawk chop, a racist gesture. By the end of the night, Brando’s front door had been pierced by two bullets, according to Ms. Littlefeather.

“I went up there thinking I could make a difference,” she told People magazine in 1990. “I was very naive. I told people about oppression. They said, ‘You’re ruining our evening.’ ”

Ms. Littlefeather had known Brando for about a year when she stepped onto the stage of the Dorothy Chandler Pavilion on his behalf, declining the award he had received for playing Mafia boss Vito Corleone in “The Godfather.”

Waiting in the wings, according to Ms. Littlefeather and Oscars telecast director Marty Pasetta, was western star John Wayne, who allegedly tried to rush onstage and attack Ms. Littlefeather but was held back by six security officers. That account was later dismissed as a Hollywood fable by film historian Farran Smith Nehme and Wayne biographer Scott Eyman, who noted that the actor was in poor health and that the “six security men” were mentioned only years later.

Regardless, the general reaction to Ms. Littlefeather’s remarks was clear from the rest of the ceremony. Presenting the best-actress winner, Raquel Welch quipped, “I hope they haven’t got a cause.” When Clint Eastwood announced best picture, he joked, “I don’t know if I should present this award on behalf of all the cowboys shot in all the John Ford Westerns over the years.”

Within a few days, other Hollywood stars had weighed in as well, dismissing Ms. Littlefeather’s speech as a publicity stunt and chastising Brando for not appearing at the ceremony in person. Rumors proliferated about Ms. Littlefeather, who was said to have been a stripper or a hired actress from Mexico. She went on to appear in a half-dozen movies, with small roles in westerns such as “The Trial of Billy Jack” (1974), but said she was blacklisted — or “redlisted,” as she put it — by Hollywood studios who refused to hire her because of her Oscars appearance.

“I spoke from my heart,” she told the Associated Press a few days after the ceremony. “Those words were written in blood, perhaps my own blood. I felt about like Christ carrying the weight of the cross on his shoulders.”

Many Native American activists celebrated her as a hero. Russell Means, a leader of the protest movement at Wounded Knee, credited her with drawing renewed attention to the demonstration, which was symbolically located at the site of the 1890 massacre of Lakota people by U.S. Army soldiers. Gunfire was exchanged during the occupation, killing two Native Americans and paralyzing a federal agent.

Native American filmmakers and producers, including Bird Runningwater, also saw Ms. Littlefeather as a trailblazer, a crucial link in a movement toward more sensitive and accurate depictions of Native American life in television shows like “Reservation Dogs” and films such as “Prey.” “The moment we’re having now,” Runningwater told NPR in August 2022, “is something that she and our filmmaking community had always dreamed of 50 years ago.”

In June 2022, then-Academy President David Rubin sent her a “statement of reconciliation,” writing that the harassment and discrimination she had suffered over the years “was unwarranted and unjustified.”

“All we were asking, and I was asking, was, ‘Let us be employed. Let us be ourselves. Let us play ourselves in films. Let us be a part of your industry, producing, directing, writing,’ ” she said in an August interview with A.frame about the night she took the Oscars stage. “ ‘Don’t write our stories for us. Let us write our own stories. Let us be who we are.’ ”

Ms. Littlefeather was born Marie Louise Cruz in Salinas, Calif., on Nov. 14, 1946. Her mother, a leather stamper and pianist, was White; her father, a saddle maker and painter, was White Mountain Apache and Yaqui.

She told the Guardian she “was abused and neglected” as a child, and dated her career as an activist to the evening when she saw her father beating her mother and tried to stop the attack by thwacking him with a broom. She ran out of the house and, when her father pursued her in his truck, scampered up a tree.

Ms. Littlefeather was raised primarily by her maternal grandparents, and said she was bullied in school for her dark skin and straight black hair. As a teenager, she attempted suicide and was hospitalized for a year, following a mental breakdown that she attributed to her struggle to reconcile her White and Native American identities.

By her early 20s she had moved to San Francisco and become involved with the American Indian Movement, joining other urban Indians in reconnecting with their ancestry and campaigning for Native American rights. She began using a new name, Sacheen, and supported herself as a model, winning the Miss American Vampire beauty pageant in 1970 as part of a promotion for a Metro-Goldywn-Mayer horror film.

She also appeared in television commercials and was the public service director at a San Francisco radio station. As she told it, she met Brando through her Bay Area neighbor Francis Ford Coppola, the director of “The Godfather,” who promised to pass the actor a letter she had written about his interest in Native American issues. Their relationship culminated in Brando calling her the day before the Oscars to invite her to attend the ceremony on his behalf.

Brando went on to praise her appearance during an interview on “The Dick Cavett Show” — “they should have at least had the courtesy to listen to her,” he said — while Ms. Littlefeather studied at the American Conservatory Theater in San Francisco.

In the early 1980s, after recuperating from a serious lung condition stemming from childhood tuberculosis, she studied nutrition at Antioch University’s San Francisco campus. She later worked as a health consultant for Indigenous communities.

By the time of her Oscars speech, she was married to Michael Rubio, an engineer. She later married Charles Koshiway Johnston, her partner of 32 years, who died in 2021. Information on survivors was not immediately available.

During the AIDS epidemic, Ms. Littlefeather worked at a Bay Area hospice founded by Mother Teresa. Reconnecting with the Catholic faith of her childhood, she also led a San Francisco prayer circle named for Kateri Tekakwitha, a 17th-century Algonquin and Mohawk woman who was canonized by Pope Benedict XVI. The group blended traditions, including incorporating buffalo dances into the Catholic mass.

“This is how I saved my life, by blending the two together,” Ms. Littlefeather told the Guardian in 2021. “The acceptance of my dominant culture’s ways and my Indian ways together, living peacefully side by side.”