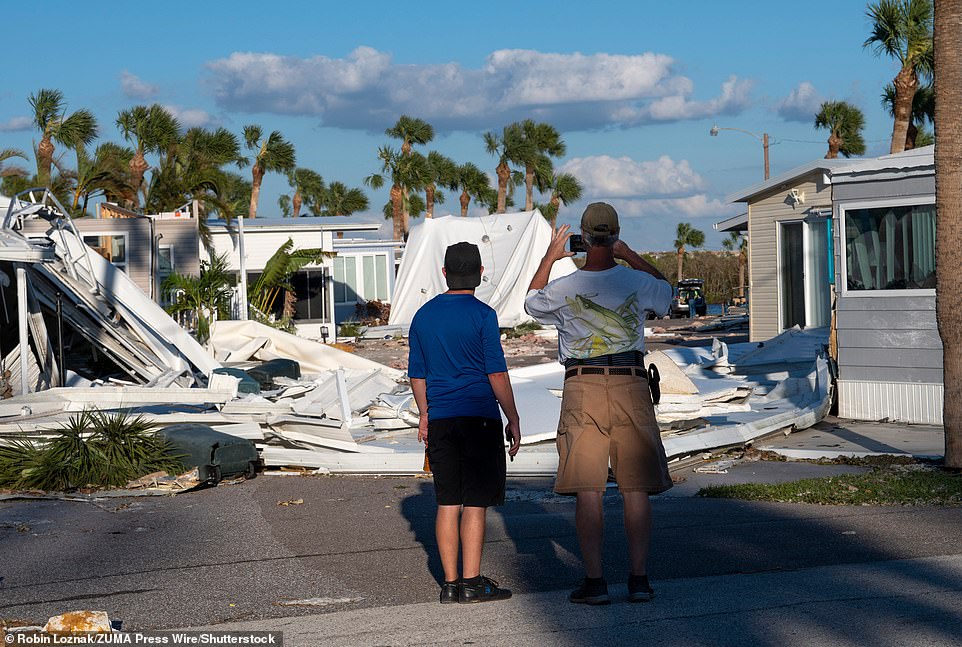 The desperate search for Hurricane Ian survivors continued today as the mounting death toll reached at least 104 – after the torrent caused an estimated $60 billion in damage.

Fort Myers Beach residents were warned that they may not be able to return to their waterlogged homes for months because of the devastation blighting the coastal community.

Insurers assessing the damage to properties ransacked by the flooding and winds are bracing for a multi-billion dollar hit after Florida’s streets were turned into rivers and houses were engulfed by the raging Category 4 storm.

Decimated coastal towns and submerged homes are only the tip of the iceberg in terms of the catastrophic loss caused by the violent weather front last week. So far, more than 1,600 locals have been rescued.

According to weatherman Cameron Hardin, residents on Fort Myers Beach could be homeless for months as authorities aren’t even close to finishing shifting through the wreckage nearby. Lee County officials also said there will be power outages in the area for at least the next four weeks.

The current number of fatalities is only expected to grow as rescue teams dive in and assess the shattered towns submerged by Ian’s fury – while 583,342 people are still in darkness after the hurricane obliterated power lines.

Depleted survivors on ‘ground zero’ Fort Myers, which was obliterated by the 10-foot storm surge, were forced to escape the aftermath on foot, while clear up teams rummaged street by street though the shocking debris.

Residents gawk at the damage to their community on Manasota Key in Charlotte County, Florida 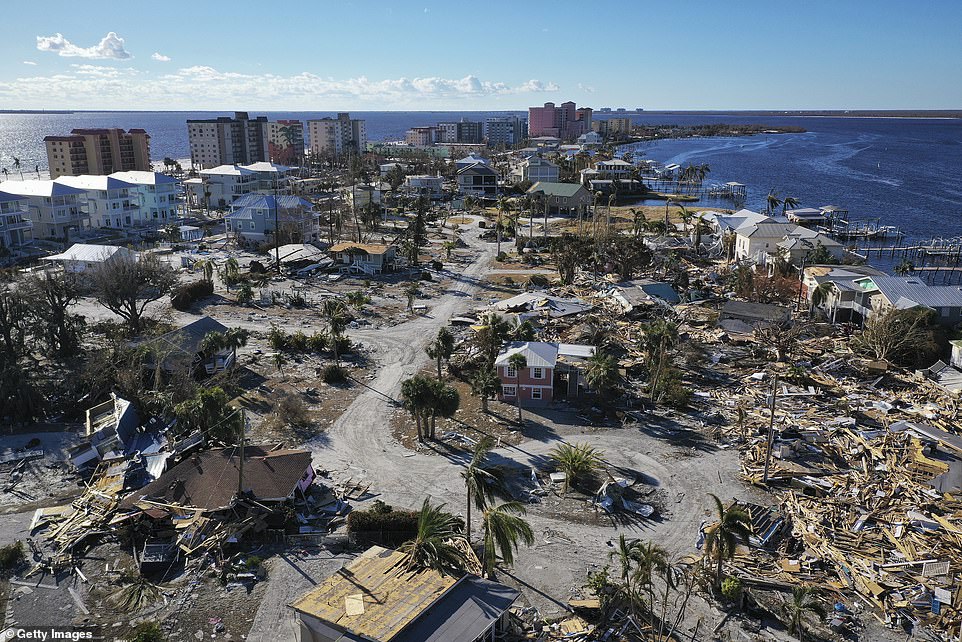 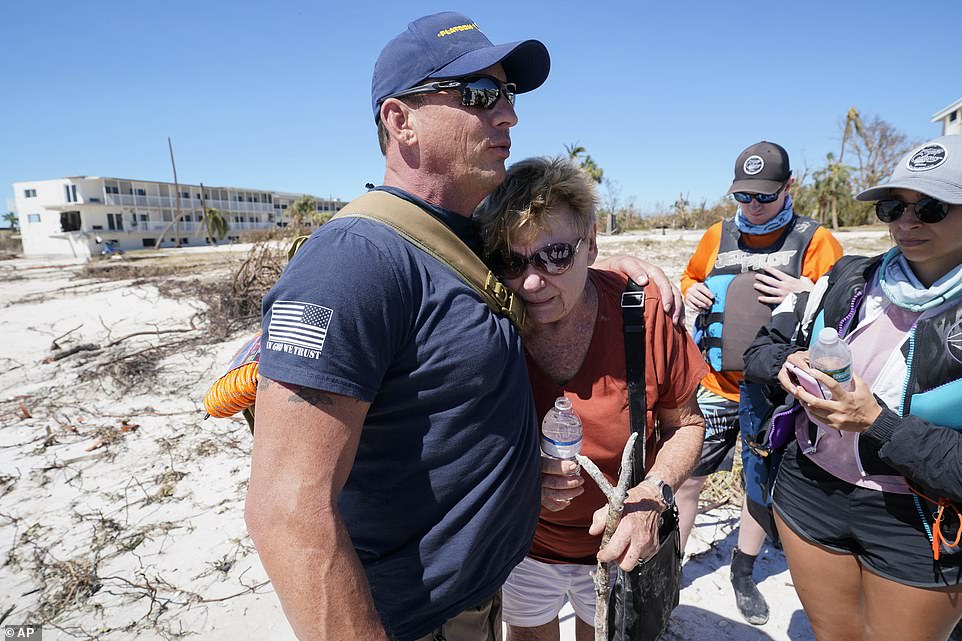 Resident Judy Hicks is embraced by Project DYNAMO rescuer Bryon Wheeldon, before she is taken off Sanibel Island, in the wake of Hurricane Ian 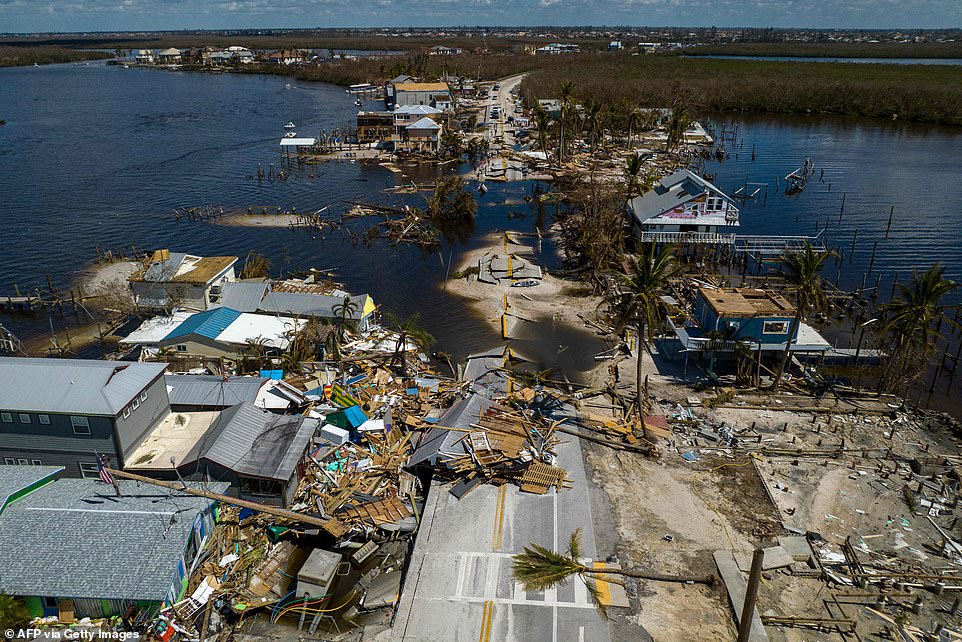 A broken section of the Pine Island Road and destroyed houses in the aftermath of Hurricane Ian in Matlacha, Florida. The death toll has reached 100 in Florida, according to officials 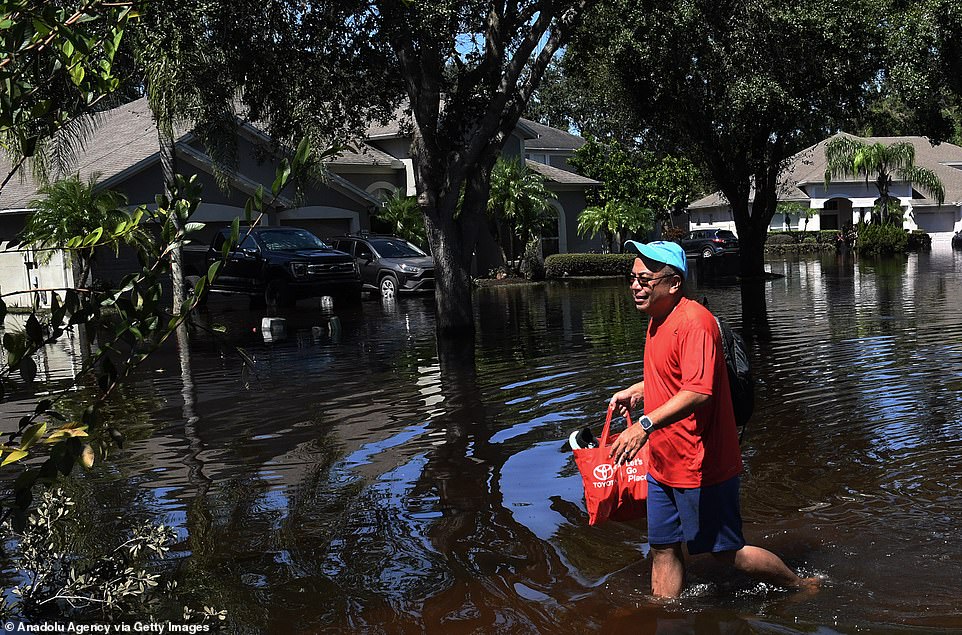 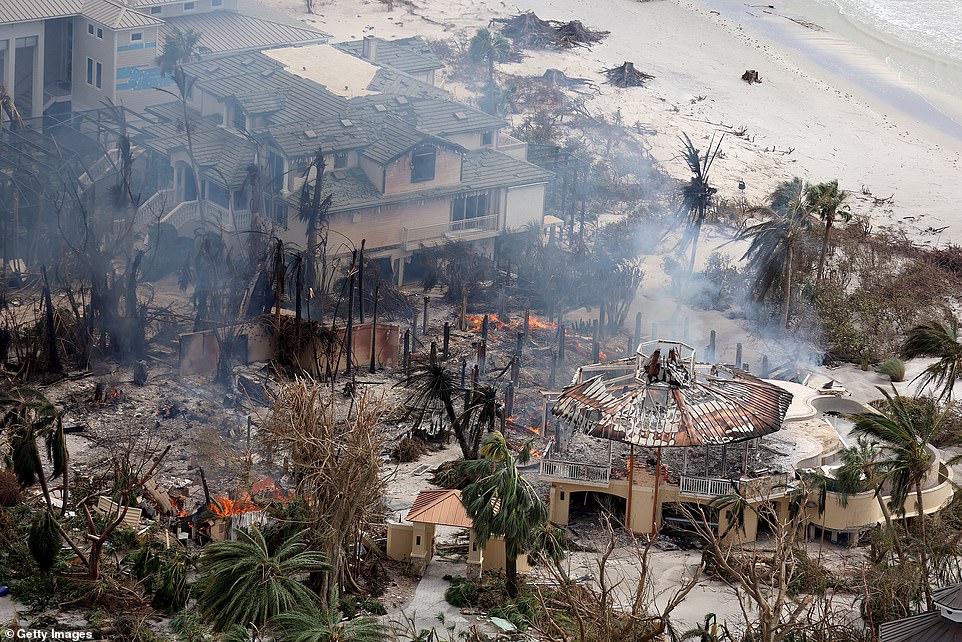 A home burns after Hurricane Ian passed through the area on September 29, 2022 in Sanibel, Florida. Estimations by the insurance industry believe that Ian has caused $60 billion in damage 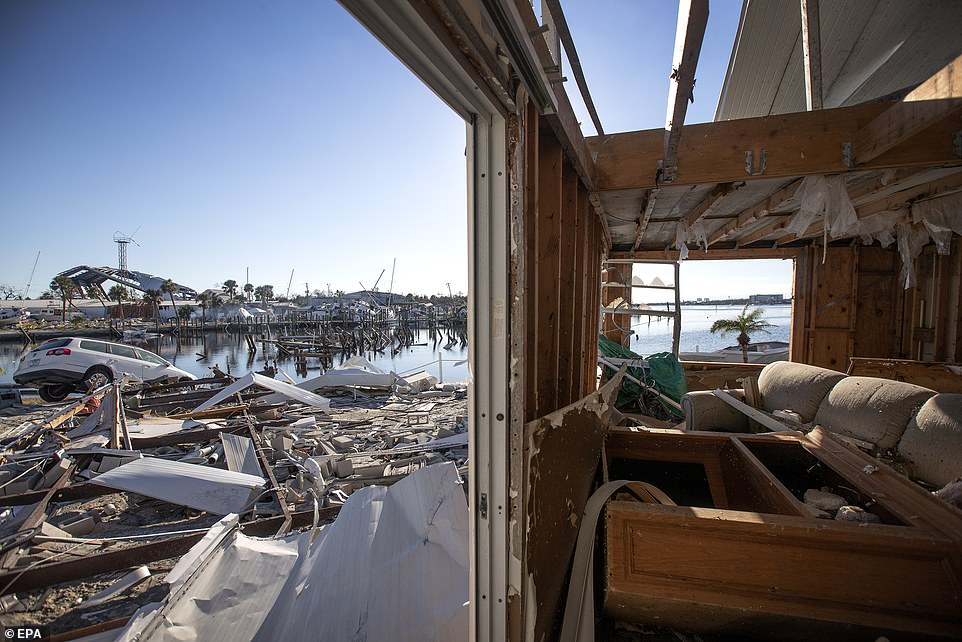 Wreckage piled up at the bay mobile park in San Carlos Island after the passing of the Hurricane Ian in Fort Myers Beach, Florida 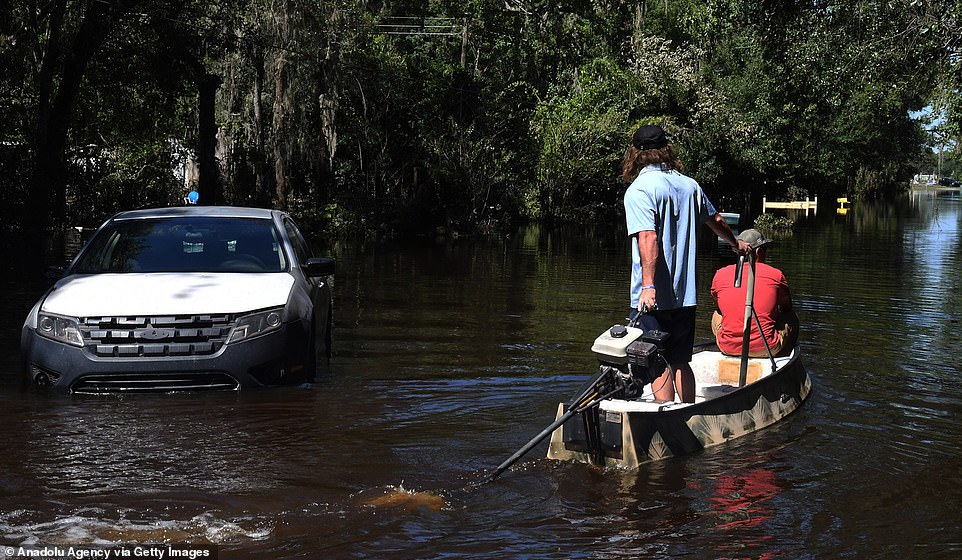 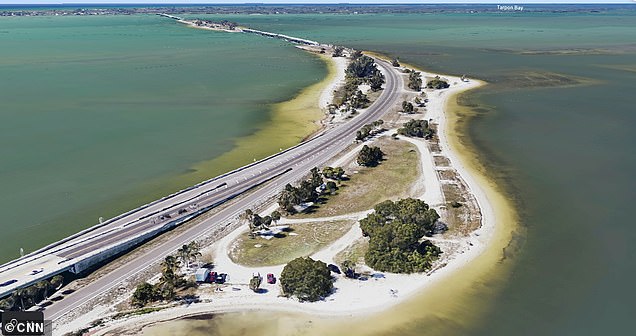 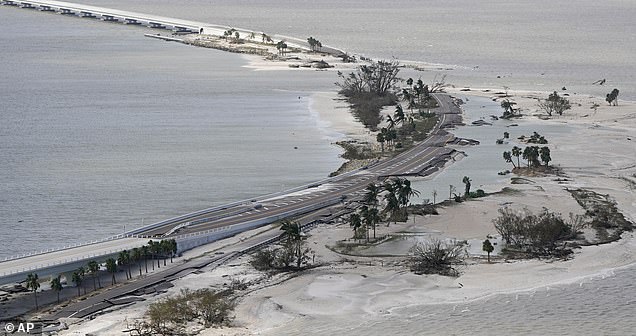 The Sanibel Causeway is seen before and after Hurricane Ian, which destroyed the bridge span in at least five places. The causeway is the only link between the Fort Myers mainland and Sanibel and Captiva Islands

However, the estimate range, the lower end of which was $42 billion, does not include elements such as losses to the National Flood Insurance Program and any potential impacts of litigation or social inflation that could lead to a total insured industry loss of $60 billion.

The death toll from Hurricane Ian climbed past 100 on Monday as embattled residents in Florida and the Carolinas grappled with a recovery expected to cost tens of billions of dollars.

According to officials, there have been 100 deaths recorded in Florida, and four more in North Carolina.

A total of 54 deaths have been recorded in Lee County – which bore the brunt of Ian’s wrath as the deadly storm made landfall last week. Charlotte County tallied 24 deaths, and 22 more across seven other Floridian counties.

It’s believed that the majority of the deaths were by drowning amid Hurricane Ian’s surge, as well as some vehicle and roofing accidents.

Of the four fatalities recorded in North Carolina, three were related to vehicle accidents and one was from carbon monoxide poisoning caused by generator usage.

Emergency responses were forced to grind to a halt last week while the storm continued to plummet Floridians – but work was underway Monday morning to relieve towns still cut off by the hurricane. 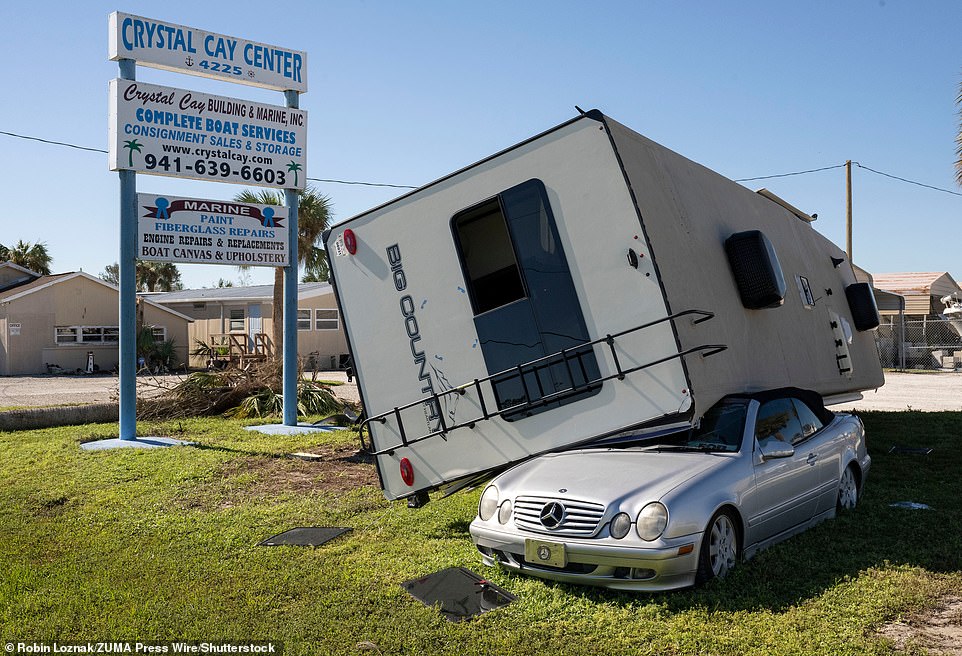 A wind blown camper-trailer rests on a passenger car along a highway in Punta Gorda, Florida 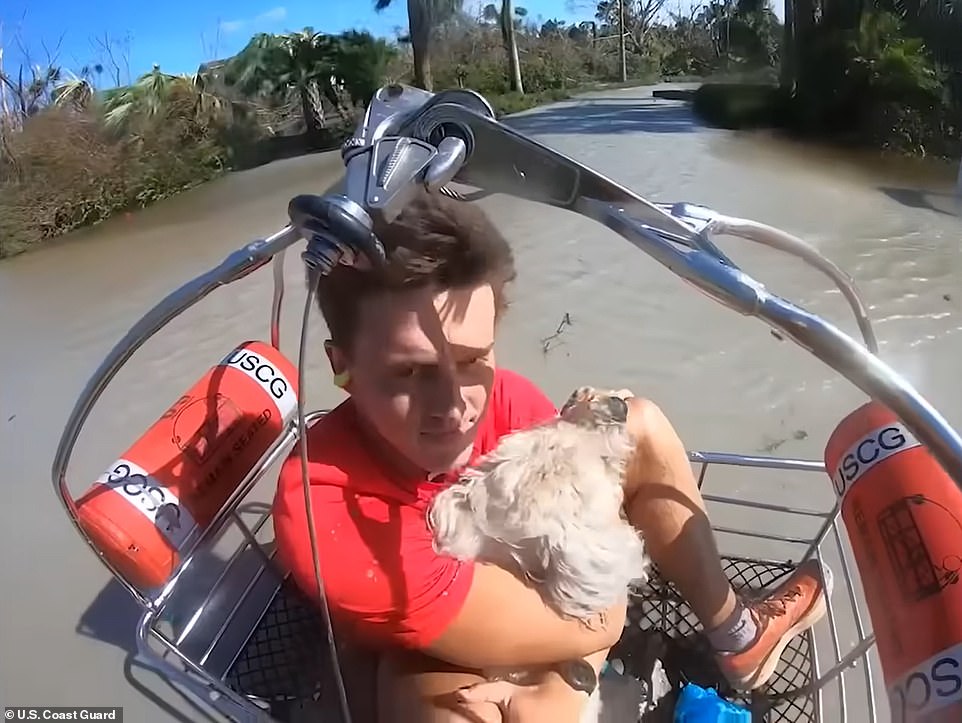 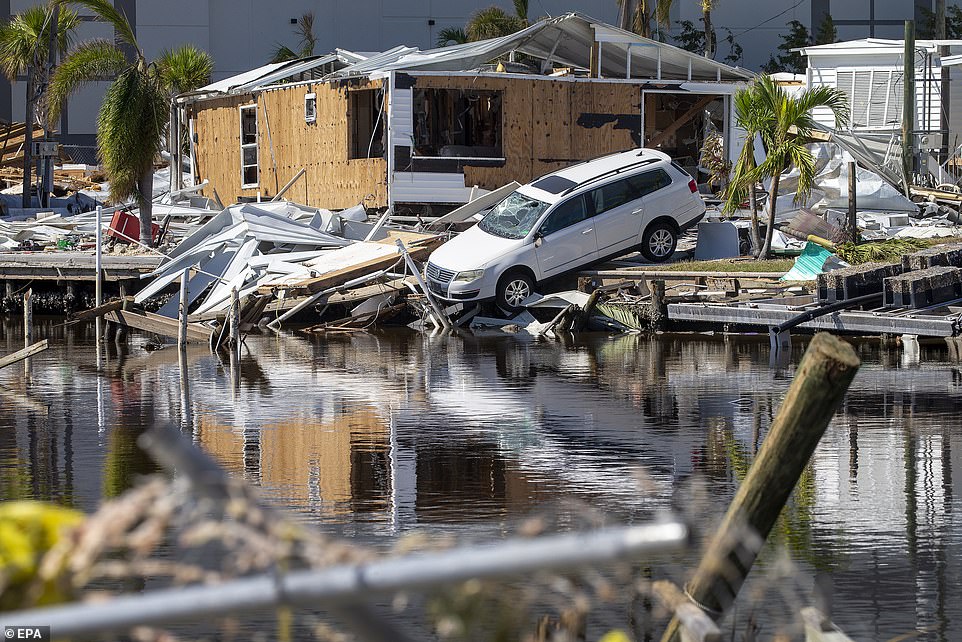 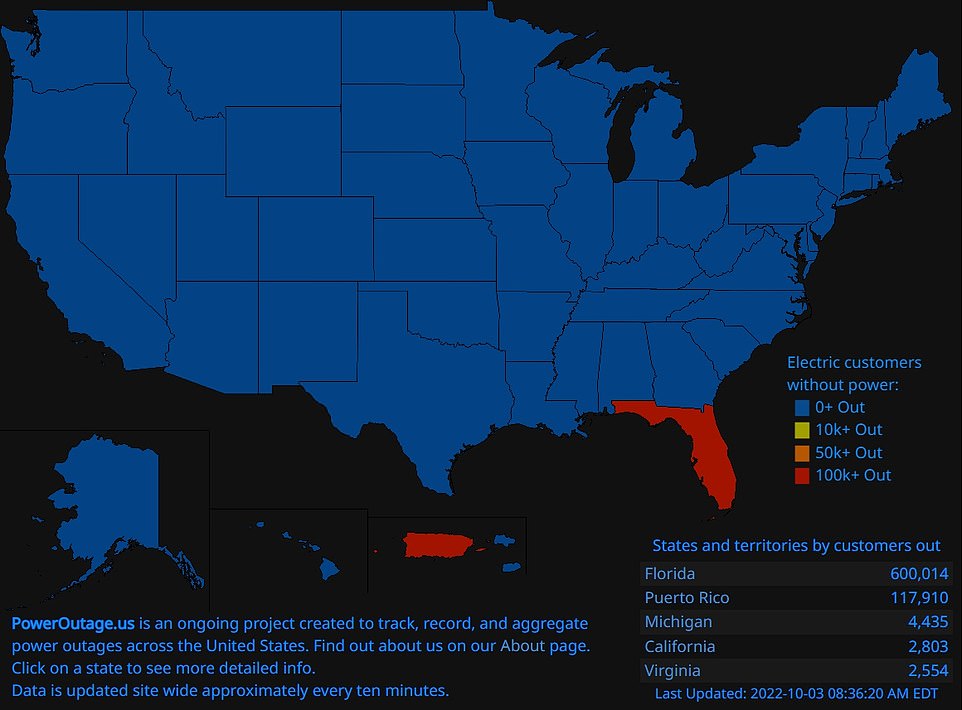 As of Monday morning, there are over 600,000 people in Florida living without power following the catastrophic destruction 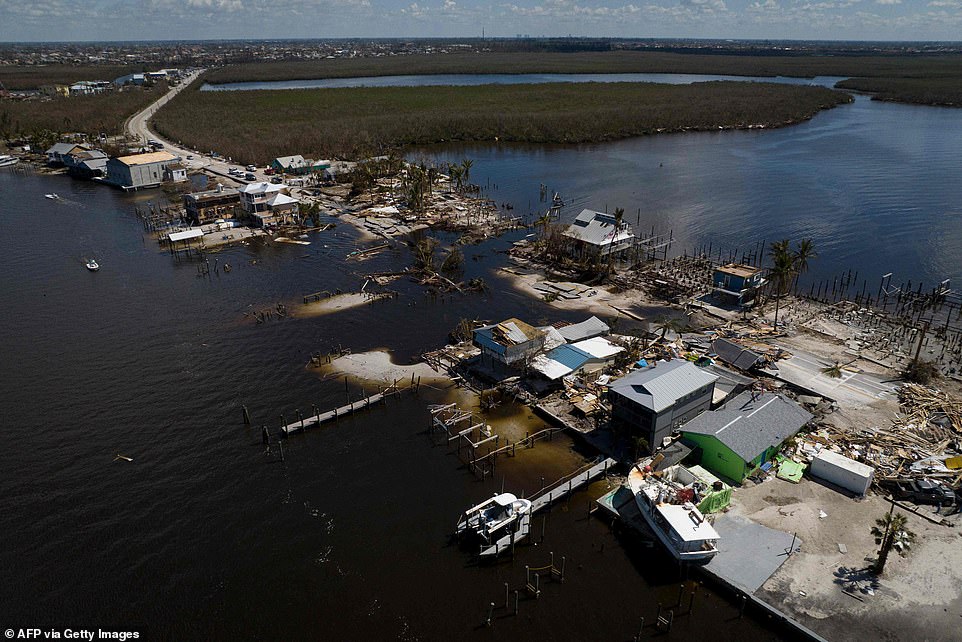 The full scale of the devastation is now coming into focus, days after Hurricane Ian tore into the coastline as one of the most powerful storms ever to hit the United States 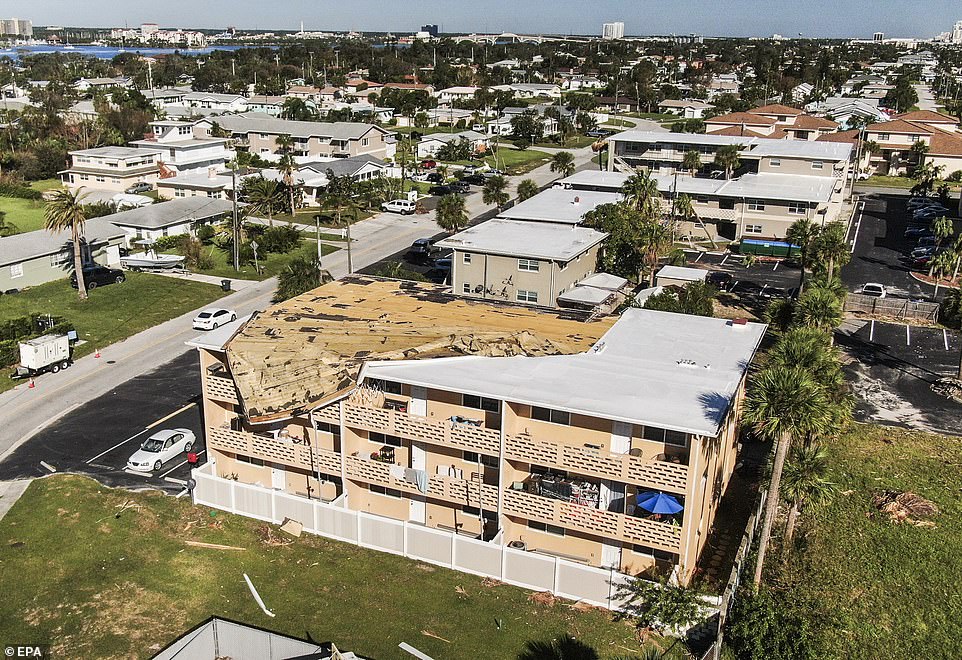 The roof of an apartment building blown off and destroyed in Daytona Beach, Florida 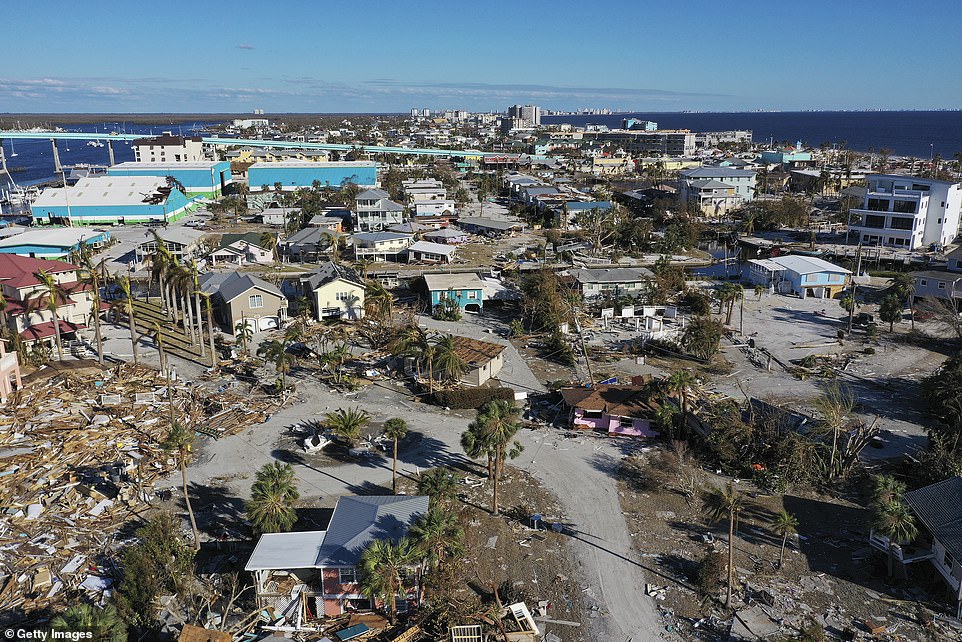 The catastrophic loss documented at Fort Myers Beach, Florida. Roofs have caved in on residents’ homes as storm surge submerged the coastland landscape 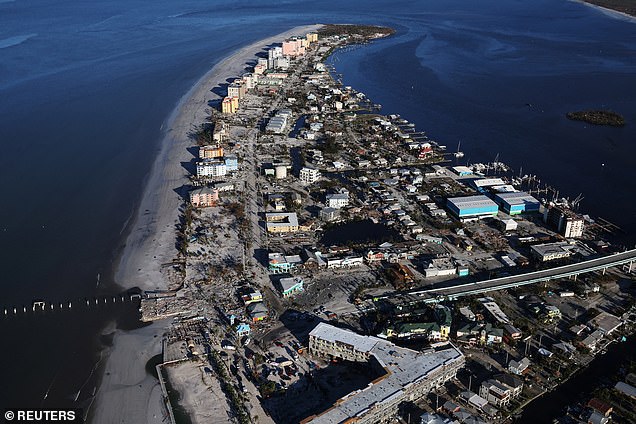 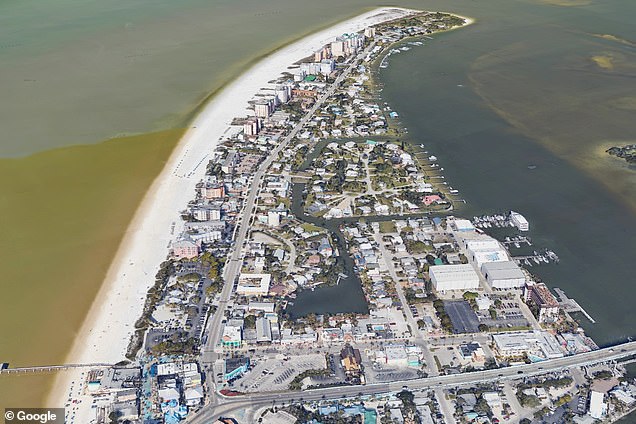 Fort Myers Beach, a town of about 5,500 on one of the barrier islands off Fort Myers, was ’90 percent’ destroyed in the storm, one official said

Additionally, an estimated 583,342 homes and businesses were still without power in Florida early on Monday after Hurricane Ian crashed across the state last week.

About 1 percent of the total industry loss will come from the impacts of Ian’s South Carolina landfall, Verisk said.

Officials last week said that Fort Myers Beach, a town of about 5,500 on one of the barrier islands off Fort Myers, was ’90 percent’ destroyed in the storm.

Survivor Craig Ruke, who lives on a stilt house in the area, told the Miami Herald: ‘We’re alive. That makes us luckier than some of our neighbors, and we’re thankful. But we’re tired, dirty and hungry. We have no running water.

‘We’re going to run out of food that hasn’t rotted already. We’re going to get dehydrated. Our cars are ruined. Everyone on this island is cut off.’

Homes were crushed to the ground and reduced to rubble, while waterlogged cars were buried in thick muck.

Other residents of the ransacked town described the horror as they watched homes with people still inside be carried away in floodwater. Those who stayed inside their high rise buildings said they were ‘shaking like a sailboat in rough seas.’

U.S. property data and analytics company CoreLogic on Friday pegged insured losses for Florida between $28 billion and $47 billion from Hurricane Ian, in what could be the costliest storm for the state since Hurricane Andrew in 1992.

Recovery is expected to be slow and difficult due to inflation, high interest rates, and labor and materials costs.

Meanwhile, Lee County Sherriff Carmine Marceno said that so far, over 700 people have been rescued in the ruinous county.

During the eye of the storm last week, eerie aerial pictures showed the total destruction of Fort Myers after the ‘superstorm’ ripped its beloved pier from its hinges. 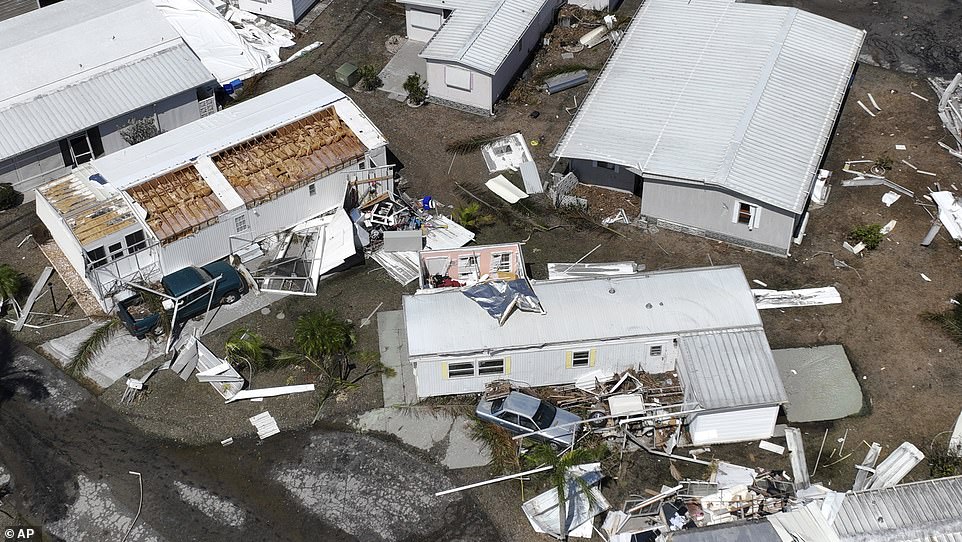 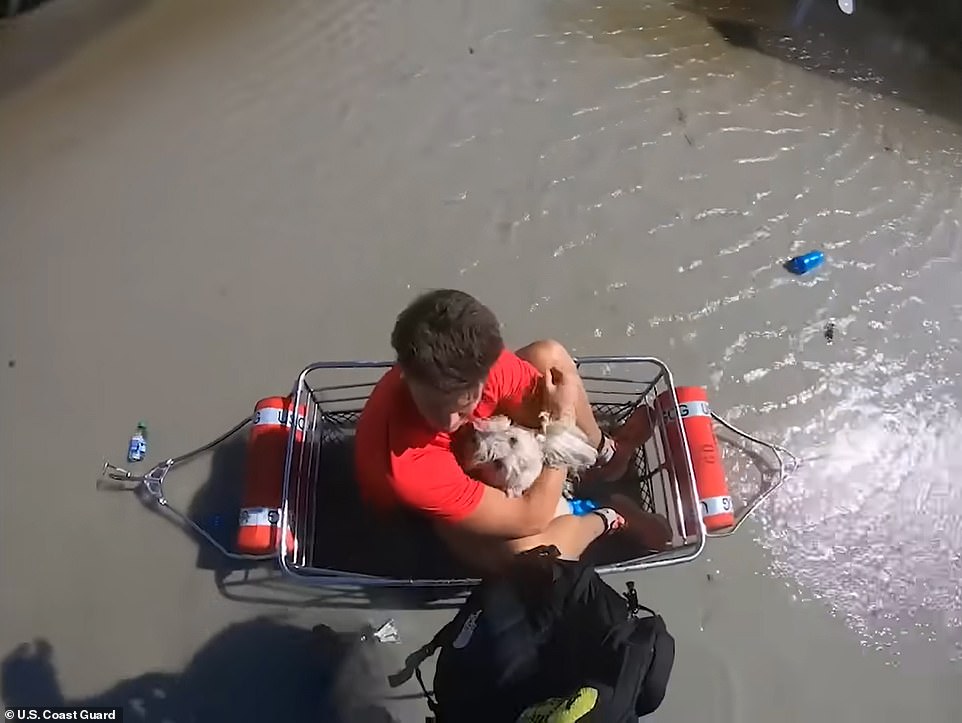 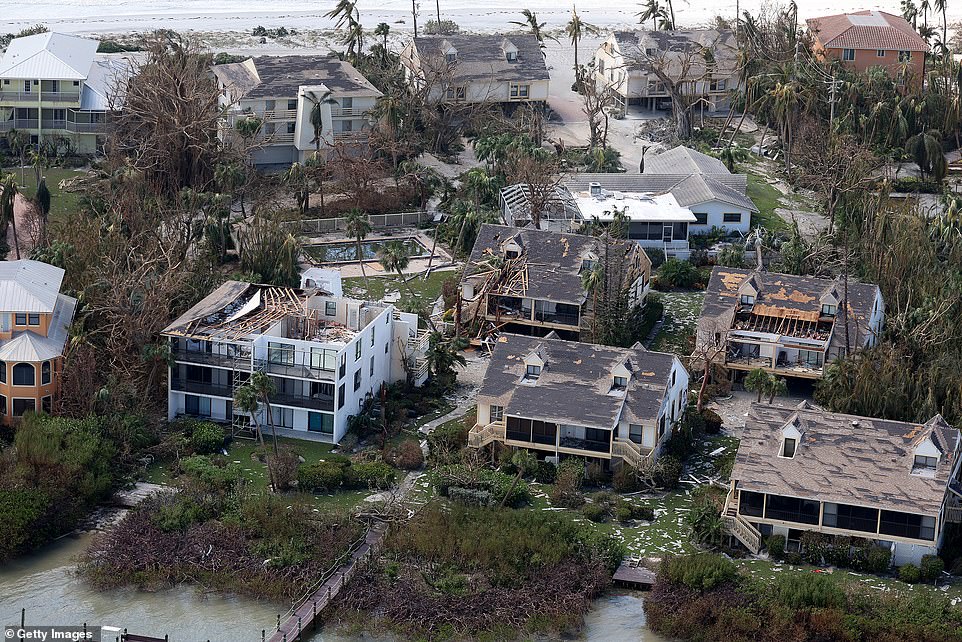 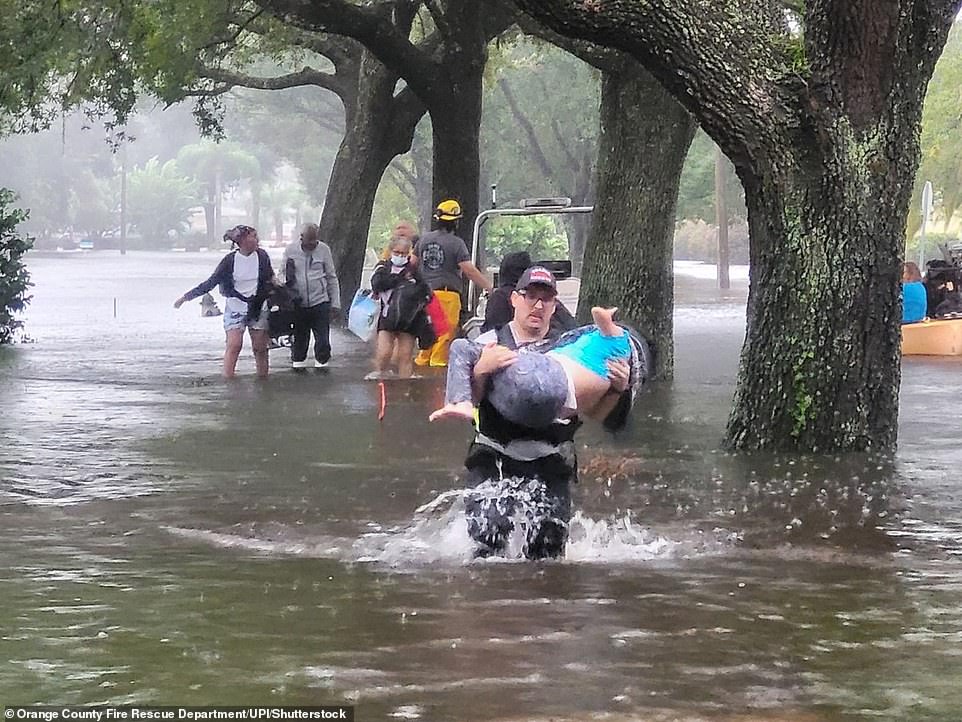 Before and after shots captured the devastation to the small Florida city, with homes leveled, ships swept on to land and fires breaking out through ghost town neighborhoods.

The sea finally appeared to have ebbed back from the shoreline to reveal the devastation to the once tropical paradise, with trees yanked from their roots and roofs shed from restaurants along the promenade.

At the time, DeSantis said the tsunami-like flooding was a ‘once in a 500-year’ event and revealed it has left 2.7million without power across his state.

He has scrambled 50 National Guard helicopters to search for survivors and rescue the thousands still stranded, missing or stuck in their homes following extensive damage from the torrent of water and 155mph winds.

The Volusia County Sheriff’s Office was among the first to publicly announce a fatality from Ian. Since then, deaths have come from multiple counties across the ravaged state.

The storm made landfall again on Friday in South Carolina, however the state has not recorded any deaths yet, according to Gov. Henry McMaster. 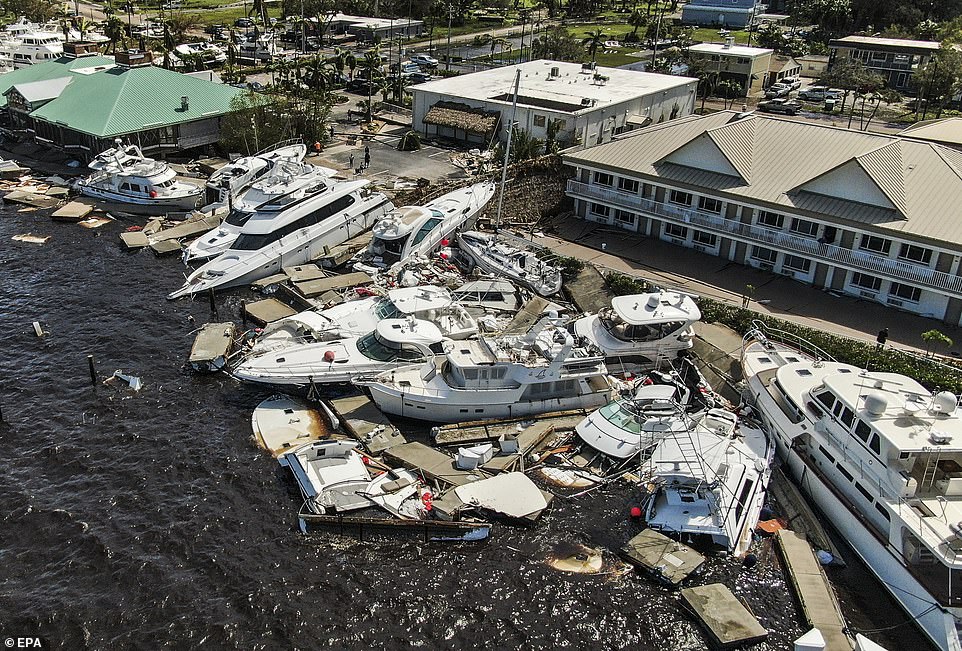 Boats and yachts in Fort Myers have been decimated by the Category 4 storm, which made landfall last week and has so far killed over 100 people