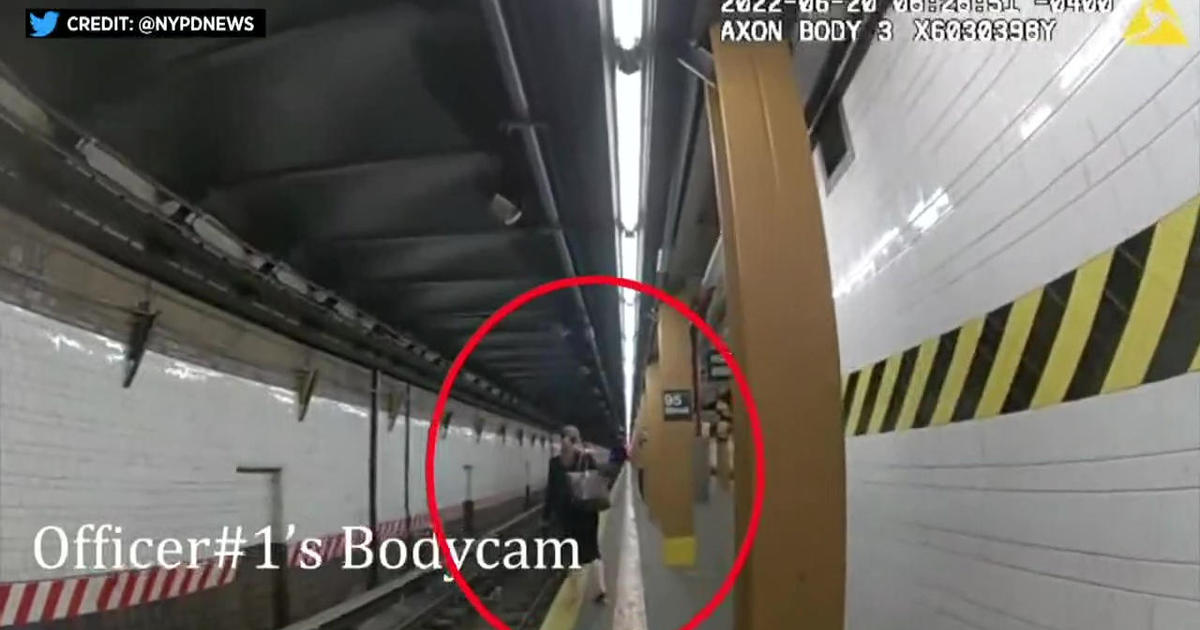 NEW YORK — Falling onto the subway tracks is a nightmare scenario for any commuter. It happened to one woman earlier this week.

But as CBS2’s Steve Overmyer reported Thursday, she was saved by some quick-thinking NYPD officers, a moment that was captured on body cam footage.

On Tuesday at around 8:30 a.m. at the 95th Street station, Elizabeth Johnston was on her way to work when the unthinkable happened.

“I called for her, like ‘Ma’am, ‘Ma’am,’ one or twice, but she didn’t respond, so I ran after and tried to grab her because at that moment she looked like she was going to fall down and I couldn’t make it on time. At that moment, I knew I had to go down,” NYPD Officer Muhammad Ghani said.

Johnston lives with epilepsy and suffered a grand mal at the worst time, falling five feet onto the tracks, but two fast-acting cops literally jumped into action, landing just a few feet from the deadly third rail.

“I couldn’t wait for two or three minutes or five minutes at that moment because at that moment I got to go down and get her up and we will deal with it later, whatever she’s suffering from, whatever it is,” Ghani said.

All the while, Ghani’s partner was keeping a close eye out for the train that was due to arrive any minute.

“As soon as we pulled her up from the tracks, the train literally came four minutes later,” Officer Rochelle Paul-Burton said.

Incredibly, Johnston suffered only minor injuries and was even back to work the next day.

“When I first saw the video, I was, honestly, I didn’t think it was me,” she said.

Johnston woke up on the stretcher grateful to be alive, and indebted to her heroes.

“It really honestly touched me, simply for the fact that you don’t see many people like that in this world today, and the fact that they were so quick to do their job, jump down there and save me. Honestly. I was a minute away from not ending up back on that platform,” Johnston said. “They saved my life.”

“This is what we wear the uniform for. Every morning, all of our brothers and sisters, we dress into this uniform to save life,” Ghani said.

Johnston said she will do her best to minimize her seizures by reducing her stress at work.

Steve Overmyer joined CBS 2 in February of 2011 as a sports anchor and reporter. He hosts Sports Update every weekend on CBS 2 and WLNY 10/55.