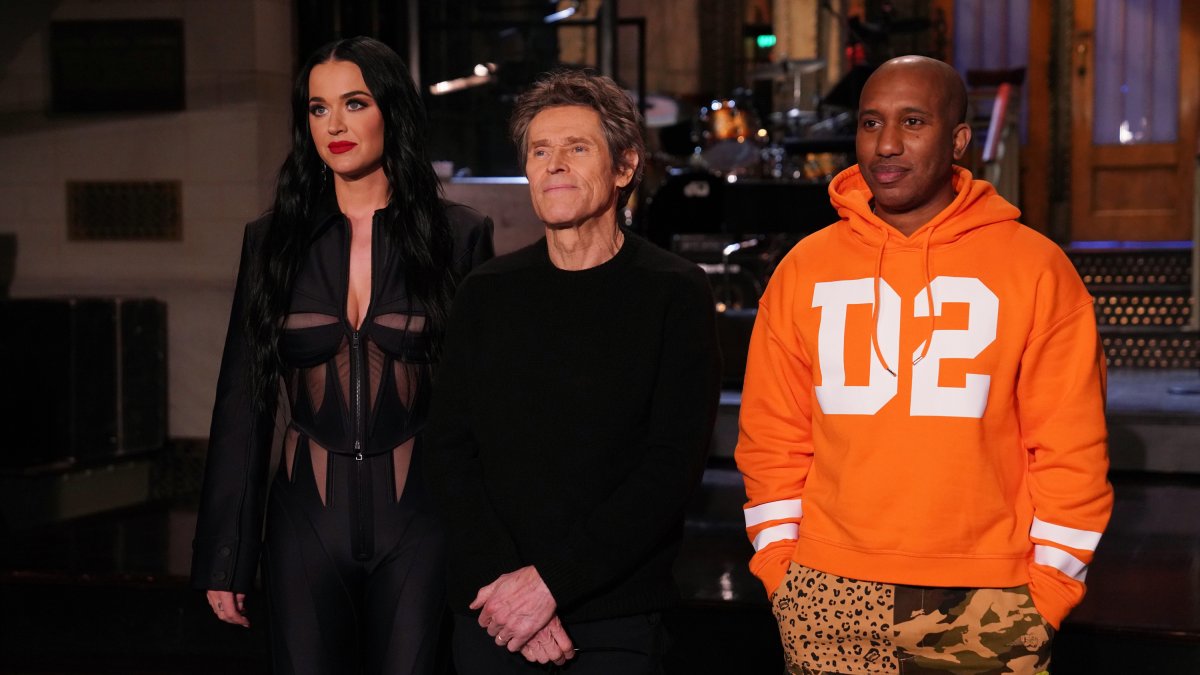 The sketch began with President Biden, played by cast member James Austin Johnson, getting a briefing in the Oval Office about the tense situation in Eastern Europe and other global hot topics from advisors, played by Ego Nwodim, Alex Moffat and Kenan Thompson.

The briefing included quips about Neil Young’s beef with Joe Rogan and Spotify, and the question whether famed quarterback Tom Brady has decided to retire despite certain reports.

One of Biden’s advisors tells the President that some of the Ukrainian intelligence comes “from the same people who told us Tom Brady will retire, so take it with a grain of salt.”

The sketch featured a look at faux Russian propaganda and misinformation unleashed to unsettle the Ukrainian people.

When Johnson’s Biden replied that Russia tried misinformation once before and it didn’t work, a military commander played by Kenan Thompson said, “40% of Americans think you lost the election, so it kind of did.”

Fake headlines put out by Russia were shown to Johnson’s Biden, ranging from “Russian Forces Surrounding Ukraine Just to Give It Big Hug” to “American CDC Strongly Recommends Russia Invade Ukraine,” and “Neil Young to Remove Music From Spotify Unless Ukraine Surrenders.”

The advisors showed Biden various commercials meant to turn Ukrainians towards Russia’s side, including one in which Pete Davidson played Green Bay Packers quarterback Aaron Rodgers, who has come under fire recently for anti-vaccine statements.

In a fake television commercial spot for State Farm, Davidson’s Rodgers says with a fake Russian accent, “Like a good neighbor, Russia is there.”

Johnson’s Biden asked if people really believed that was Rodgers. Thompson’s character informed him that was Aaron Rodgers, inferring that the NFL athlete was willingly appearing in Russian disinformation.

Willem Dafoe made his debut as host of “Saturday Night Live,” speaking in his opening monologue to his excitement in returning to New York City, where his career as an actor began.

“I moved here when I was 21, had no money, and rented an apartment on 10th and Avenue A for 200 bucks a month, and that’s where I learned how to act,” said the four-time Oscar nominee. “For example, I had to “act” like I enjoyed having a bathtub in my kitchen.”

Dafoe later spoke to the fact that he has “an expressive face” that he “can’t control,” which has in result, contributed to many of his iconic roles.

“I don’t think about controlling it. I’m not one of those subtle actors like Nicolas Cage or Al Pacino. Maybe that’s why people come up to me and say, ‘You know what role you’d be perfect for? The Joker,’” he deadpanned. “Always nice to hear that you’ve got the vibe of a sociopath.”

In the first sketch of the night, a meeting for a building’s tenants goes off the rails. Alex Moffat and Chloe Fineman moderated the meeting, and multiple tenants come up to complain. Dafoe plays a tenant who bought the top three floors in the building “back in the 1970’s for $11.”

Pete Davidson plays the building’s superintendent who joins the meeting with an update on the rodent situation in the building.

“How is the rat problem?” Fineman asks.

Davidson appears with a fake mustache, disgruntled hair, blowing a cigarette as he leans down to speak into the microphone.

But co-host Colin Jost noted Ukraine’s desire to avoid panic after a top Ukraine security official described panic as “the sister of failure.”

“Am I wrong,” Jost said as an image of Donald Trump Jr. and Eric Trump appeared. “I thought Ivanka was the sister of failure.”

Co-host Michael Che mentioned how President Biden this week traveled to Pittsburgh and promised to rebuild a collapsed bridge using funds from his infrastructure bill.

“While the Republicans feel the bridge should just lift itself by its bootstraps,” Che quipped.

Jost discussed how a new report said that last year in 2021, the inflation rate grew the fastest since Ronald Reagan was President.

Jost jokes, “Biden has even started using Reagan’s old catchphrase; ‘Where am I?’”

Peyton Manning stopped by “Weekend Update” alongside Colin Jost to discuss the NFL playoffs Tom Brady retirement rumors. Manning primarily uses his time during the segment to speak about his new love for the hit Netflix show “Emily in Paris.”

Katy Perry’s first performance was a trippy rendition of “When I’m Gone,” in which Perry donned a mushroom cowgirl costume and had an elaborate set.

“SNL” returns after the Winter Olympics, on Feb. 26 with host John Mulaney and LCD Soundsystem as the musical guest.