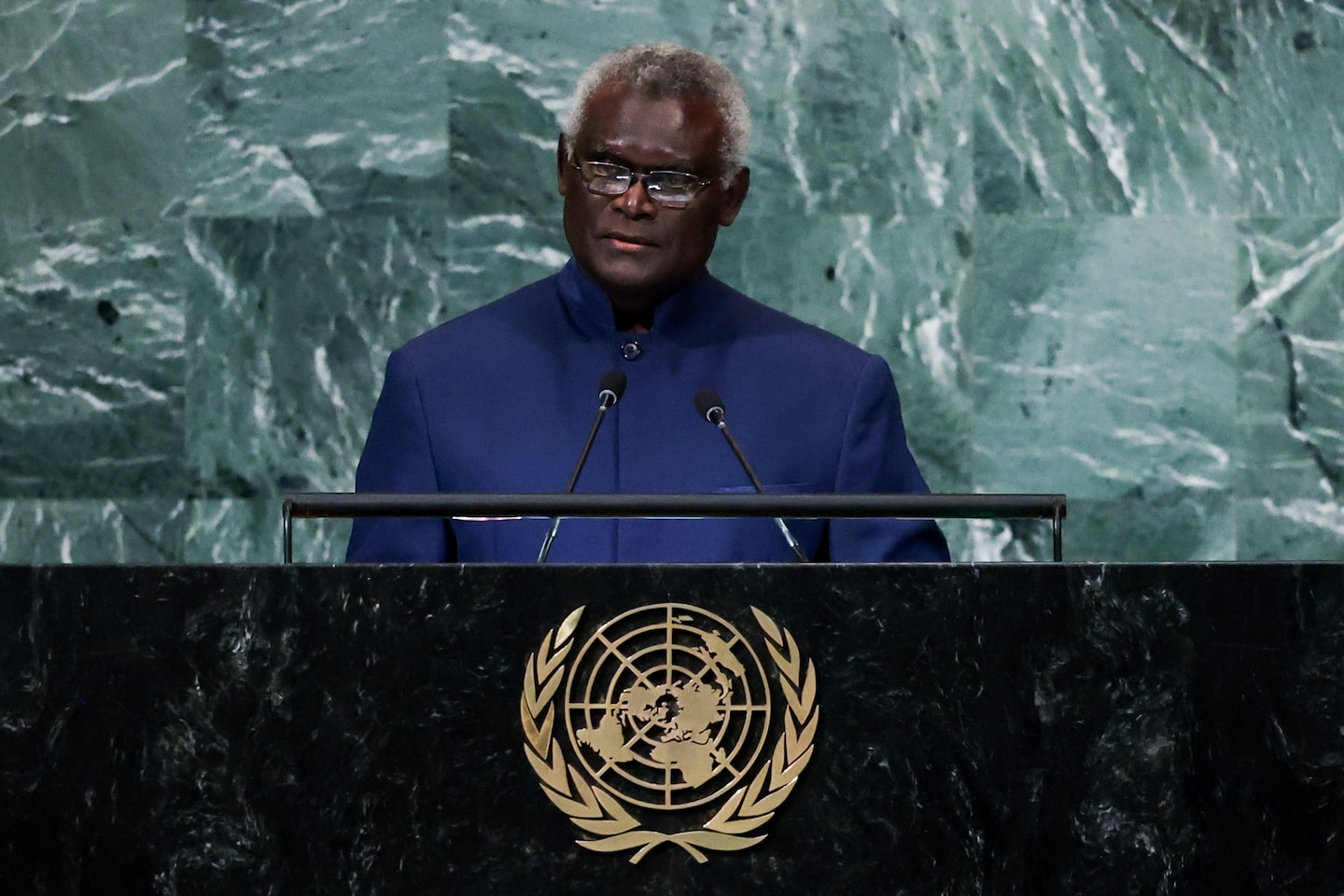 SYDNEY — American efforts to rally Pacific island leaders at a White House summit this week were dealt a blow when the Solomon Islands said it would not endorse a joint declaration the Biden administration plans to unveil.

As President Biden prepared to host the leaders of a dozen Pacific countries on Wednesday and Thursday in a first-of-its-kind gathering, the Solomon Islands sent a diplomatic note to other nations in the region saying there was no consensus on the issues and that it needed “time to reflect” on the declaration.

The setback, which was revealed just hours before the start of the summit, is a sign of the challenges Washington faces as it attempts to reassert influence in a region where China has made inroads. It also came as Vice President Harris tours East Asia, where she is emphasizing U.S. commitment to a “free and open Indo-Pacific” during visits to U.S. allies Japan and South Korea. In remarks to U.S. sailors in Japan on Wednesday, Harris condemned China’s “disturbing” actions in the region, including “provocations” against Taiwan.

China has increased diplomatic ties with and financial aid to Pacific island nations in recent years, while also pushing security agreements that could increase its military presence in a region whose key shipping routes and natural resources make it strategically valuable.

While the timing of the objection to the summit declaration was something of a surprise, the source was not.

The Solomon Islands has drifted closer to China since the election of its combative prime minister, Manasseh Sogavare, in 2019. The Solomon Islands switched its diplomatic recognition from Taipei to Beijing a few months later and made headlines again earlier this year when it struck a controversial security pact with China that the United States and its allies fear could lead to a Chinese base in the archipelago, roughly 1,000 miles from Australia’s coast. The Solomon Islands and China have denied plans for a base.

Earlier this month, Solomon Islands lawmakers voted to delay national elections from 2023 until 2024 in what critics called a “power grab” and a sign of growing Chinese-style authoritarianism.

In an address to the United Nations General Assembly in New York last week, Sogavare said his nation had been “unfairly targeted” and “vilified” because of its relationship with China.

In the diplomatic note, which was obtained by The Washington Post and is dated Sept. 25, the Solomon Islands Embassy to the United States in New York said the declaration would need “further discussion.” The Australian Broadcasting Corp. first reported that the Solomon Islands was refusing to sign the joint statement, which the ABC said has been in the works for weeks.

According to a draft of the declaration reviewed by the ABC, the statement will touch on several issues, from illegal fishing to covid-19 recovery, but will declare climate the “highest priority” and “single greatest existential threat” to the Pacific. But Pacific countries appeared to have removed a reference to the China-Solomon Islands security pact, deleting language emphasizing the need to “consult with one another closely on security decisions with regional impacts,” the ABC reported.

The Solomon Islands’ objection to the White House summit declaration will be seen by some as obstructive and influenced by China, said Anna Powles, senior lecturer with the Center of Defense and Security Studies at New Zealand’s Massey University.

But other Pacific island nations have also expressed concerns about the haste with which the United States convened the summit, she said, noting that the leaders of Vanuatu and Nauru are not attending because of elections. Kiribati will not be represented at the summit, while a few other countries were late invites.

“The United States is strongly welcomed back in the region, but arguably the tempo by which the U.S. has pursued its re-engagement in the Pacific is felt to be too rushed, too hurried,” Powles said.

By initially failing to invite all the members of the Pacific Islands Forum — an important regional body — the United States also risked emulating China, which fell short in its bid for a broad regional security deal in May partly because some Pacific island nations felt rushed to sign the sweeping agreement, she added.

“Absolutely there are parallels in terms of the lack of consultation, the lack of consensus and the circumventing of the Pacific Islands Forum,” Powles said, noting that China’s failed regional security pact was very different than what will likely emerge from the White House summit.

The Biden administration is increasing its diplomatic presence in the Pacific with new embassies planned in the Solomon Islands, Tonga and Kiribati. In July, Harris also announced the administration would ask Congress to triple funding for economic development and ocean resilience in the region to $60 million a year for the next decade.

The White House has acknowledged the growing geopolitical stakes in the region, while insisting its efforts are not merely a reaction to China.

“There is an undeniable strategic component,” Kurt Campbell, the National Security Council’s Indo-Pacific coordinator, said at a conference last week. “We’ve seen in the past several years a more ambitious China that seeks to develop a footprint militarily and the like in the Indo-Pacific. I think that has caused some anxiety with partners like Australia, New Zealand, even countries in the region as a whole.”

“There’s also a deeper recognition that in the past we have perhaps paid lesser attention to these critical places than we should have,” he added.

Ellen Nakashima in Washington contributed to this report.