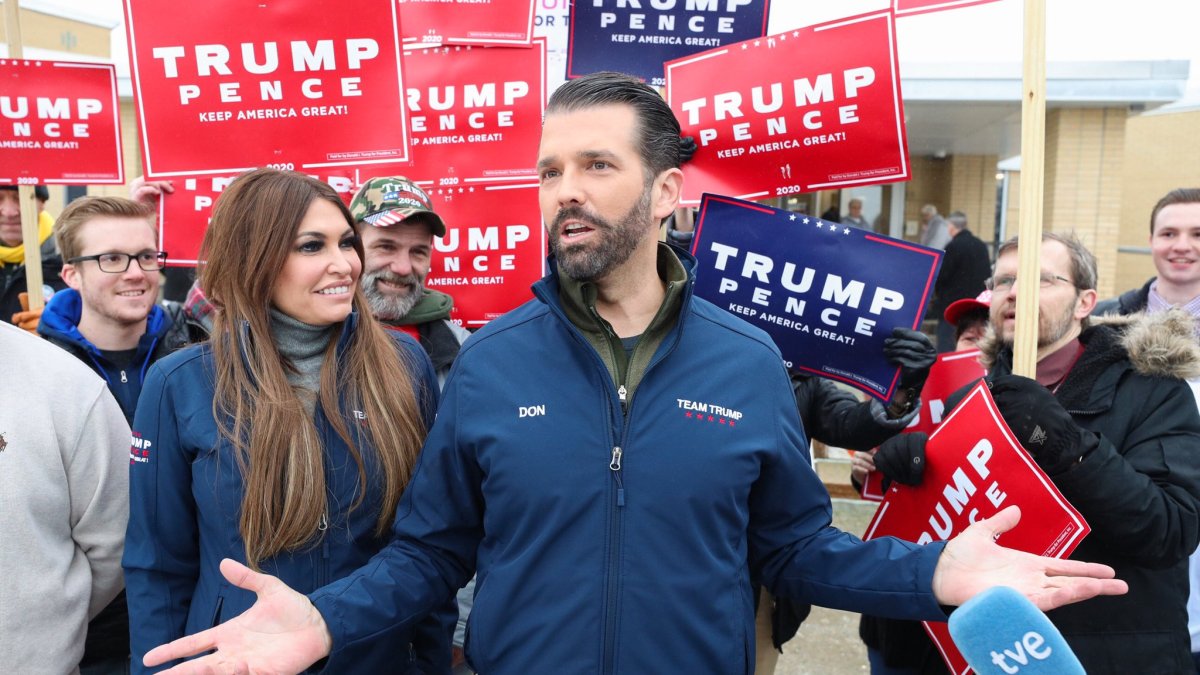 Former President Donald Trump’s children, Donald Jr. and Ivanka, have testified before investigators with the New York attorney general’s office looking into the Trump Organization’s finances and whether the firm inflated or deflated real estate valuations to suit its interests, two sources close to the investigation confirmed to NBC News Thursday.

Donald Trump Jr. testified last week, the sources said. Ivanka Trump testified Wednesday, they said. According to a source, neither of them ever invoked their constitutional fifth amendment right. It wasn’t clear if the meetings were held in person.

The depositions had been expected to be completed last month but were delayed by the death of their mother, Ivana Trump. A spokesperson for New York Attorney General Letitia James’ office offered condolences at the time in announcing the delay.

Donald Trump Jr. and his brother, Eric, lead the Trump Organization. Eric Trump pleaded the Fifth when he was deposed by video in October 2020. He did so more than 500 times, according to a January court filing from James’ office. Ivanka Trump was once a top Trump Organization executive and later served as senior White House adviser while her father was in office.

Her mother, Ivana Trump, died July 14 at her East 64th Street townhouse. Her death was ruled accidental. The medical examiner ruled her death an accident and said she died of blunt impact injuries to her torso. The office declined further comment, but a senior official with direct knowledge of the matter said the circumstances were consistent with a fall down the stairs and there was no indication of foul play.

Ivana Trump was remembered at a funeral at St. Vincent Ferrer Catholic Church earlier this month. Her burial, though, has now become a story of its own. Learn more here.

Wednesday’s early afternoon service is invitation-only and being held at St. Vincent Ferrer Catholic Church on Lexington Avenue, between 65th and 66th streets, on the Upper East Side, a source in the Trump family told NBC News.

The former president’s children, their spouses and children stood in line outside the church after they arrived and they somberly waited for white-gloved pallbearers to carry Ivana Trump’s casket from the hearse into St. Vincent.

“A very sad day, but at the same time a celebration of a wonderful and beautiful life,” the ex-president wrote on his social media platform, Truth Social, before heading to the Mass with his current wife, former first lady Melania Trump.

Tiffany Trump, the daughter of the former president and his second wife, Marla Maples, also attended the service, as did family friends including Jeanine Pirro, co-host of Fox News’ “The Five,” and Charles Kushner, a real estate developer and the father of Ivanka Trump’s husband, Jared Kushner. Fashion designer Dennis Basso, a longtime friend of Ivana Trump’s, was also among the mourners.

The Mass was “an elegant, wonderful send-off for Ivana Trump,” longtime friend R. Couri Hay said as he emerged.

Ivana Trump: An Icon in Her Own Right

A Czech-born ski racer and sometime model, Ivana Trump married the future president in 1977, and became a businesswoman. She and Trump formed a publicity power couple in the 1980s, and she was the mother of his oldest children.

“I am very saddened to inform all of those that loved her, of which there are many, that Ivana Trump has passed away at her home in New York City,” Trump posted on his social media app, Truth Social. “She was a wonderful, beautiful, and amazing woman, who led a great and inspirational life. Her pride and joy were her three children, Donald Jr., Ivanka, and Eric. She was so proud of them, as we were all so proud of her. Rest In Peace, Ivana!”

Their children also released a statement, calling her “an incredible woman — a force in business, a world-class athlete, a radiant beauty and caring mother and friend. Ivana Trump was a survivor.

“She fled from communism and embraced this country,” the statement continued. “She taught her children about grit and toughness, compassion and determination. She will be dearly missed by her mother, her three children and 10 grandchildren.”

She became an icon in her own right, dripping with ’80s style and elegance, complete with her signature beehive hairdo. She influenced the look of the over-the-top Patsy Stone in the classic British sitcom “Absolutely Fabulous,” with the character extolling Ivana as “tremendous” in one episode.

Trump herself would eventually appear in the 1996 hit film “The First Wives Club” with the now-famous line, “Ladies, you have to be strong and independent, and remember, don’t get mad, get everything.”

The Trumps became partners in love and business, with Ivana playing roles such as manager of one of his Atlantic City casinos. She worked tirelessly there and also had a hand in making Trump Tower an image of ’80s success, helping the decorator and taking a strong interest in such details as the doormen’s uniforms, said Barbara Res, a former Trump Organization executive who was in charge of the skyscraper’s construction.

“She did all that to impress Donald, to win his approval. She was traveling back and forth all the time, and leaving her kids. She had a tremendous work ethic.”

The two were fixtures of New York’s see-and-be-seen scene before their equally public, and messy, 1992 divorce. Donald Trump had met his next wife, Marla Maples.

During the split, Ivana Trump accused him of rape in a sworn statement in the early 1990s. She later said that she didn’t mean it literally, but rather that she felt violated.

Donald Trump would say at times that he regretted having Ivana join him in business and blamed it for the unraveling of his marriage.

“I think that putting a wife to work is a very dangerous thing,” he told ABC News in the early ’90s. “If you’re in business for yourself, I really think it’s a bad idea to put your wife working for you,” he said, complaining that when she turned into a businessperson, “a softness disappeared.”

Nevertheless, Ivana ultimately remained friendly with her ex-husband, whom she famously called “The Donald.” She enthusiastically backed his 2016 White House run, saying he would “make big changes” in the United States, and told the New York Post that she was giving him suggestions on his campaign.

“We speak before and after the appearances and he asks me what I thought,” she said. She said she advised him to “be more calm.”

“But Donald cannot be calm,” she added. “He’s very outspoken. He just says it as it is.”

Ivana Trump, a skier-turned-businesswoman who formed half of a publicity power couple in the 1980s as the first wife of former President Donald Trump and mother of his oldest children, has died in New York City. NBC New York’s Ida Siegal reports.

However supportive, she occasionally ruffled feathers.

In 2017, while promoting a book, she told “Good Morning America” that she spoke with the then-president about every two weeks and had his direct White House number, but didn’t want to call to frequently “because Melania is there and I don’t want to cause any kind of jealousy or something like that because I’m basically first Trump wife, OK?” she said with a laugh. “I’m first lady, OK?”

Melania Trump’s spokesperson at the time responded, saying there was “clearly no substance to this statement from an ex, this is unfortunately only attention-seeking and self-serving noise.”

Ivana Trump had continued her business ventures in recent years, promoting an Italian weight-loss diet in 2018.

“Health is the most important thing we have. Let’s keep it that way,” she said at the time.

Ivana Trump’s death came during a fraught week for the Trump family. Two of her children, Donald Jr. and Ivanka, and the former president are due to appear in coming days for questioning in the New York attorney general’s civil investigation into the family’s business practices.

Ivana Trump was born Ivana Zelnickova in 1949 in the Czechoslovak city of Gottwaldov, formerly Zlin, which had just been renamed by the Communists who took over the country in 1948.

She was married four times, most recently to Italian actor Rossano Rubicondi. The two divorced in 2009 after a year of marriage but continued to see each other off and on until 2019, when she told the New York Post the relationship had run its course. He died last year of cancer at 49.

Kwarteng to accelerate fiscal plan after joking about mini-budget – live