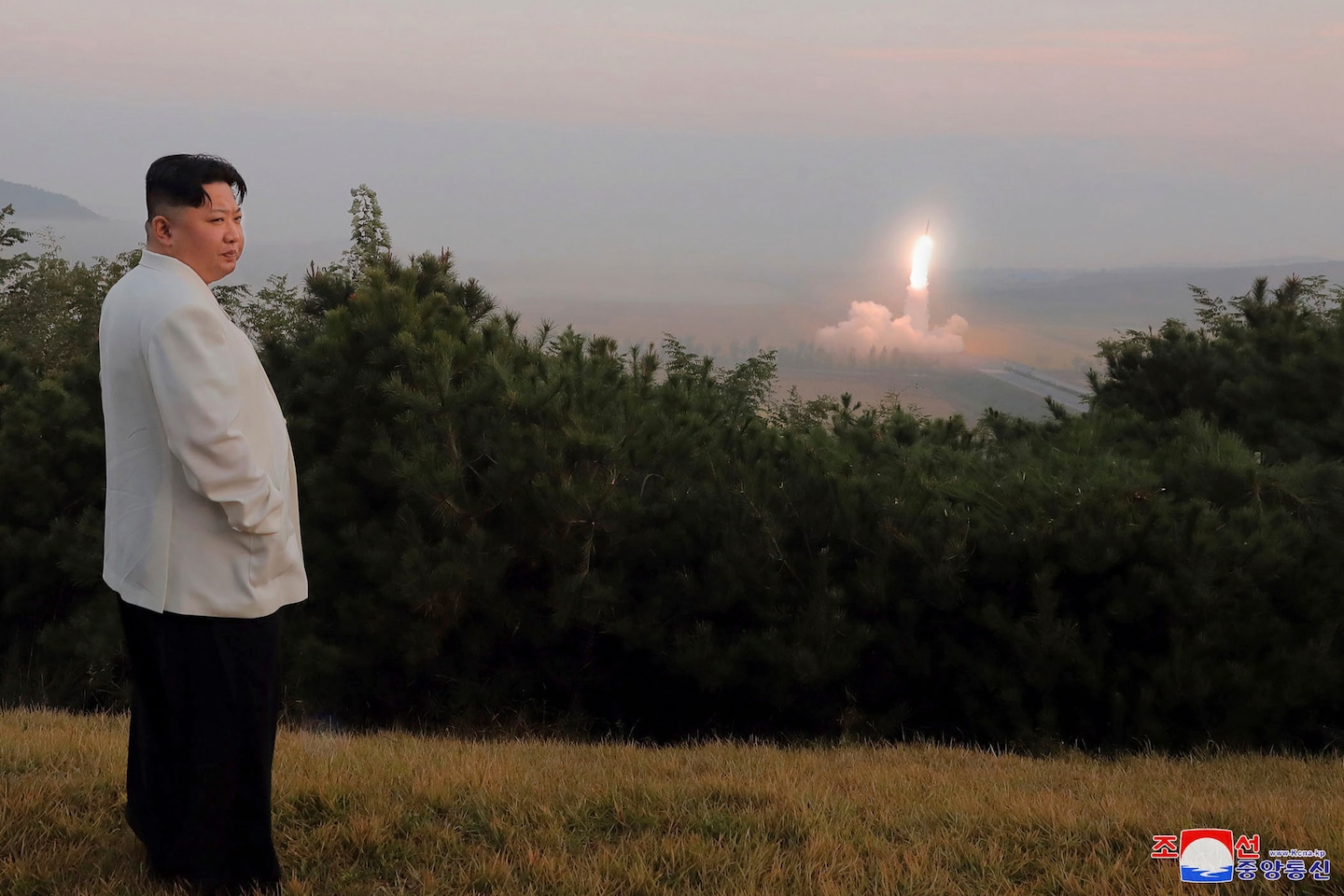 SEOUL — On one side of the border, North Korea is testing new and more powerful missiles, some designed to carry nuclear warheads capable of reaching the continental United States. On the other side, South Korea is again promising economic aid to persuade its neighbor to give up those arms.

The split screen — evident in a flurry of test launches and announcements during the past 10 days — underscores the intractability of the increasingly dangerous issue.

Negotiations over denuclearization of the peninsula have been stalemated since talks collapsed at a 2019 summit. And North Korean leader Kim Jong Un has only become more resolute about advancing his country’s program, which he views as critical leverage with the world. This month alone has seen Pyongyang fire intercontinental ballistic missiles twice.

Yet what South Korean President Yoon Suk-yeol is offering — with details released Monday in a self-proclaimed “audacious plan” — is much like the carrot dangled 15 years ago, when Seoul promised to bring North Korea’s per capita income up to $3,000 if its leaders abandoned their nuclear arsenal. Neither happened.

“It’s getting more difficult to get the international community together on North Korea and denuclearization,” said Chun Yung-woo, a former South Korean national security adviser and chief negotiator for talks from 2003-2009 that involved six nations. “The geopolitics is working against the goal of denuclearization.”

There are signs that Pyongyang’s decades-long position on relations with Washington, Beijing and Moscow is fundamentally shifting. According to Rachel Minyoung Lee, a fellow at the Washington-based think tank 38 North, Kim now appears to view engagement with the United States as futile and his country’s interests as best guaranteed through alignment with China and Russia. Kim noted in a September speech that “the change from a unipolar world advocated by the U.S. into a multipolar world is being accelerated significantly.”

In recent months, both China and Russia have drawn North Korea closer than ever. The two countries have consistently rejected efforts at the U.N. Security Council to punish North Korea for its ballistic missile tests, which has allowed Kim to aggressively improve its weapons capabilities with near impunity.

Pyongyang had a complicated relationship with Beijing and Moscow for many years. But after boosting diplomacy with Pyongyang, China now accounts for more than 90 percent of North Korea’s external trade activity. Chinese President Xi Jinping sees a convenient ally in North Korea given tensions in his nation’s dealings with the United States.

Pyongyang also has become a vocal supporter of Moscow despite its war in Ukraine. North Korea was one of five countries that in March declined to call for an end to Russia’s invasion at the U.N. General Assembly. This summer, it heralded a new level of “strategic and tactical cooperation” with Russia.

“These are very dangerous geopolitical changes that will make denuclearization of North Korea more difficult than it already is. It is already close to impossible,” Chun said. “The North Korean support for Russia and its invasion of Ukraine, the U.S.-China strategic competition, all of these are conducive to North Korea’s [weapons] advancement and give indemnity in the way of missile tests or nuclear tests.”

Indeed, Kim announced in September that there would be “absolutely no denuclearization, no negotiation and no bargaining chip to trade.” North Korea has rejected overtures to resume talks unless Washington reverses what Pyongyang considers “hostile policies” and provides sanctions relief and security guarantees. North Korea vehemently objects to joint military drills by the United States and its allies as well as the presence of U.S. nuclear-armed bombers and submarines in the region.

North Korea’s leader showed off his daughter. What could it mean?

These dynamics have many experts in Seoul and Washington questioning whether to ditch efforts to convince North Korea to relinquish its nuclear ambitions and recognize it as a nuclear state — a politically controversial move but one that some experts say the United States and South Korea have already made in tacit ways.

The United States has said repeatedly that it will meet with North Korea “anywhere, anytime, without preconditions.” But past U.S. negotiators say Kim will not take that offer seriously without more specificity. The Biden administration has not revealed an explicit North Korea strategy.

South Korea’s president took office in May vowing a stronger stance toward the North. The policy brief that Yoon’s conservative administration released Monday includes medical aid, infrastructure support and other economic assistance in exchange for Pyongyang initiating some denuclearization.

Its chance of success are slim. “However impoverished North Korea is, economic aid has failed to move Kim Jong Un and boosting the amount is still not the solution,” said Kim Dong-yub, a former South Korean navy officer who teaches at University of North Korean Studies in Seoul.

The brief lays out a three-pronged approach: deterrence against North Korean military threats, dissuasion of the regime’s nuclear pursuits through sanctions and pressure, and diplomacy to re-engage Pyongyang in disarmament talks. South Korea calls it the “3D” plan.

Seoul would prefer a comprehensive approach involving all three pursuits, “but if it does not work out, we will keep pushing for ‘deterrence’ and ‘dissuasion’ until ‘diplomacy’ can be reached,” explained Deputy National Security Adviser Kim Tae-hyo.

Yoon’s policy signals that “it will not merely wait for Pyongyang to engage in a dialogue while letting the regime keep up illicit weapons activity without consequences,” said Lee Ho-ryung, a researcher at the Korea Institute for Defense Analyses in Seoul. That’s a change from Yoon’s predecessor, Moon Jae-in, whose repeated attempts to resume the stalled talks were rebuffed even as North Korea continued to bolster its nuclear arsenal.

South Korea’s Foreign Ministry said Tuesday that it is reviewing new unilateral sanctions against North Korea over its “continued provocations” with missile launches. A further provocation like a nuclear test, it added, could prompt steps to curb the North’s cyberattacks — a source of financing for the regime’s nuclear program.

A broader question is whether the White House has the political will to tackle the situation. South Korea’s plan does not address North Korea’s security concerns and demands for sanctions relief. Both are largely in U.S. hands, experts note.

“For now, it doesn’t look like the Biden administration is paying any attention to North Korea,” Chun said. Given other issues that the administration believes are more urgent, “it looks like President Biden has forgotten about North Korea.”

Kim Yo Jong, the influential sister of the North Korean leader, just berated Yoon and his government’s “idiots” for their sanctions push and warned that it could spark further hostility.

“The desperate sanctions and pressure of the U.S. and its South Korean stooges” will add to the North’s “hostility and anger,” she said in a statement noted by state media on Thursday.

“I wonder what ‘sanctions’ the South Korean group, no more than a running wild dog gnawing on a bone given by the U.S., imprudently impose on the DPRK,” she said, referring to her country by its official acronym. “What a spectacle sight!”