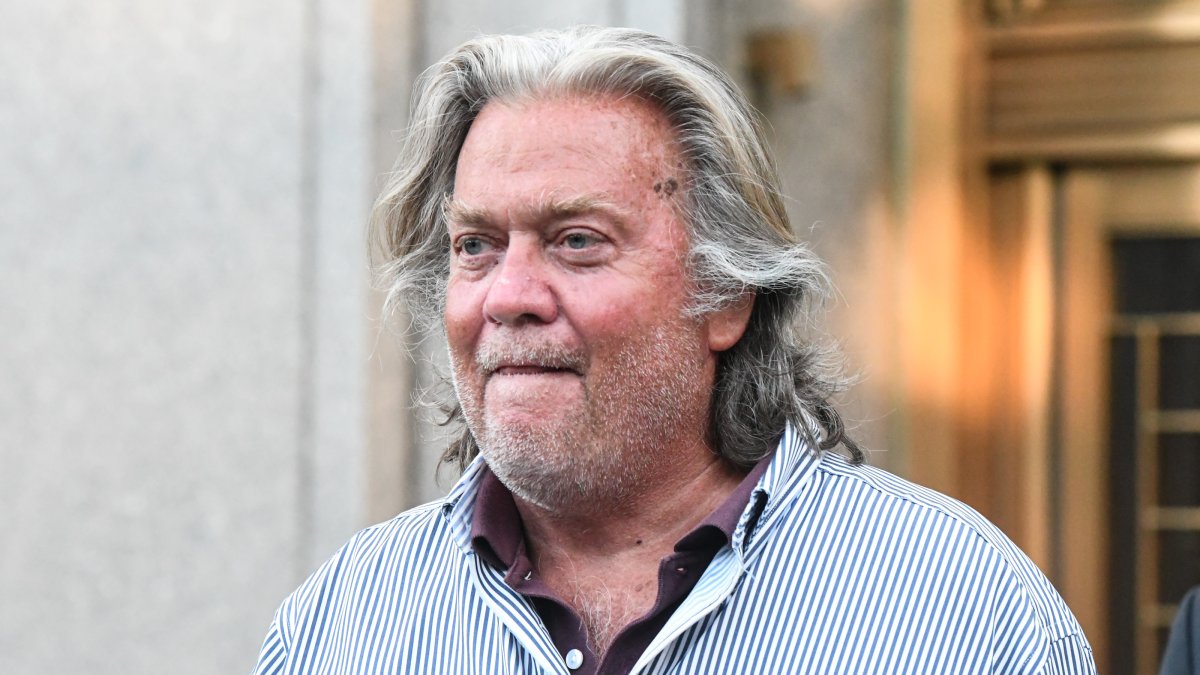 Steve Bannon, a former White House strategist and ally of Donald Trump who faces criminal charges after months of defying a congressional subpoena over the Capitol riot, has told the House committee investigating the attack that he is now willing to testify.

Bannon’s turnabout was conveyed in a letter late Saturday from his attorney, lawmakers said, as the committee prepares to air some of its most striking revelations yet this week against Trump in what may be its final set of hearings.

“I expect that we will be hearing from him and there are many questions that we have for him,” said Rep. Zoe Lofgren, D-Calif. She and other committee members said in television interviews Sunday they intend to have Bannon sit for a private interview, which they typically conduct in a deposition with sworn testimony.

Bannon had been one of the highest-profile Trump-allied holdouts in refusing to testify before the committee, leading to two criminal counts of contempt of Congress last year for resisting the committee’s subpoena. He has argued that his testimony is protected by Trump’s claim of executive privilege. The committee contends such a claim is dubious because Trump had fired Bannon from the White House in 2017 and Bannon was thus a private citizen when he was consulting with the then-president in the run-up to the riot on Jan. 6, 2021.

Still, in recent days, as the former president grew frustrated with what he decried as a one-sided presentation by the committee of seven Democrats and two Republicans, Trump said he would waive that privilege claim, according to a letter Saturday to Bannon’s lawyer.

“If you reach an agreement on a time and place for your testimony, I will waive executive privilege for you, which allows for you to go in and testify truthfully and fairly, as per the request of the unselect committee of political thugs and hacks,” Trump wrote.

The committee’s Thursday evening hearing will examine the three-hour plus stretch when Trump failed to act as a mob of supporters stormed the Capitol. It will be the first hearing in prime time since the June 9 debut that was viewed by 20 million people.

A hearing Tuesday will focus on the plotting and planning of the insurrection by white nationalist groups such as the Proud Boys, the Oath Keepers and the Three Percenters, and will also highlight testimony taken Friday from former White House counsel Pat Cipollone.

It comes after surprise testimony last month from former Trump White House aide Cassidy Hutchinson provided the most compelling evidence yet that Trump could be linked to a federal crime. Since then, the committee has seen an influx of new information and confidential tips.

Former senior aide to chief of staff Mark Meadows testified Tuesday to the January 6 committee, providing a firsthand look at former President Donald Trump’s actions during the attack on the U.S. Capitol.

Rep. Jamie Raskin, D-Md., suggested that Bannon “had a change of heart, and after watching, presumably, all of these people come forward, including Cassidy Hutchinson, he’s decided that he wants to come in, and if he wants to come in, I’m certain that the committee would be very interested in hearing from him.”

Bannon’s trial on the two criminal counts is July 18. A hearing in his case was scheduled for Monday in federal court in Washington. Bannon has been seeking a delay in his trial to at least fall.

It’s unclear how much Bannon intends to cooperate. He has expressed a preference to appear before the committee in a public hearing. The committee is making clear he must first sit for a private interview, typically in a sworn deposition. It’s also possible he may opt to appear and then refuse to answer questions, citing his Fifth Amendment right against self-incrimination.

“The way that we have treated every single witness is the same, that they come in, they talk to the committee there,” Raskin said. “If they’re going to take a deposition, they’re sworn under oath. It’s videotaped. It’s recorded, and then we take it from there.”

The committee says it wants to hear from Bannon because he “had specific knowledge about the events planned for Jan. 6 before they occurred.” It cited as an example comments that he made on his podcast the day before the riot.

“It’s not going to happen like you think it’s going to happen. OK, it’s going to be quite extraordinarily different. All I can say is strap in,” Bannon said in that podcast. “All hell is going to break loose tomorrow. … So many people said, ‘Man, if I was in a revolution, I would be in Washington.’ Well, this is your time in history.”

House investigators have been digging deeper into the evidence collected so far about the role extremist groups played in the deadly insurrection and what Trump was doing as the violence ensued down the street from the White House.

Rep. Adam Kinzinger, R-Ill., who will lead Thursday’s hearing with Rep. Elaine Luria, D-Va., described the upcoming testimony as key to providing an extensive timeline of what Trump did and did not do in those critical hours on the afternoon of Jan. 6, 2021. That includes Trump’s tweet criticizing Vice President Mike Pence for lacking “courage” as angry protesters outside the Capitol were heard chanting “Hang Mike Pence” for not challenging Democrat Joe Biden’s 2020 election victory.

“We want to show the American people what was the president doing during that time,” Kinzinger said Sunday. “The rest of the country knew that there was an insurrection. The president obviously had to have known there was an insurrection. So where was he? What was he doing? It’s a very important hearing. Pay attention. Because I think it goes to the heart of what is the oath of a leader.”

Tuesday’s hearing will explore efforts to assemble the mob on the National Mall and then organize the march down Pennsylvania Avenue, where some rioters — armed with pipes, bats and bear spray — charged into the Capitol, quickly overrunning the overwhelmed police force. More than 100 police officers were injured, many beaten, bloodied and bruised, that day.

It will also highlight a meeting on Dec. 18, 2020 at the White House in which former Trump lawyers Sidney Powell and Rudy Giuliani, onetime Trump national security adviser Michael Flynn and others floated the idea of seizing voting machines and invoking national security emergency powers, to the heated objection from several White House lawyers who argued that Trump needed to accept his defeat, according to Raskin, who will lead Tuesday’s hearing.

“We’re gonna get to use a lot of Mr. Cipollone’s testimony,” he said. “He was aware of every major move, I think, that Donald Trump was making to try to overthrow the 2020 election and essentially seize the presidency.”

Kinzinger spoke on ABC’s “This Week, Lofgren was on CNN’s “State of the Union” and Raskin appeared on CBS’ “Face the Nation.”