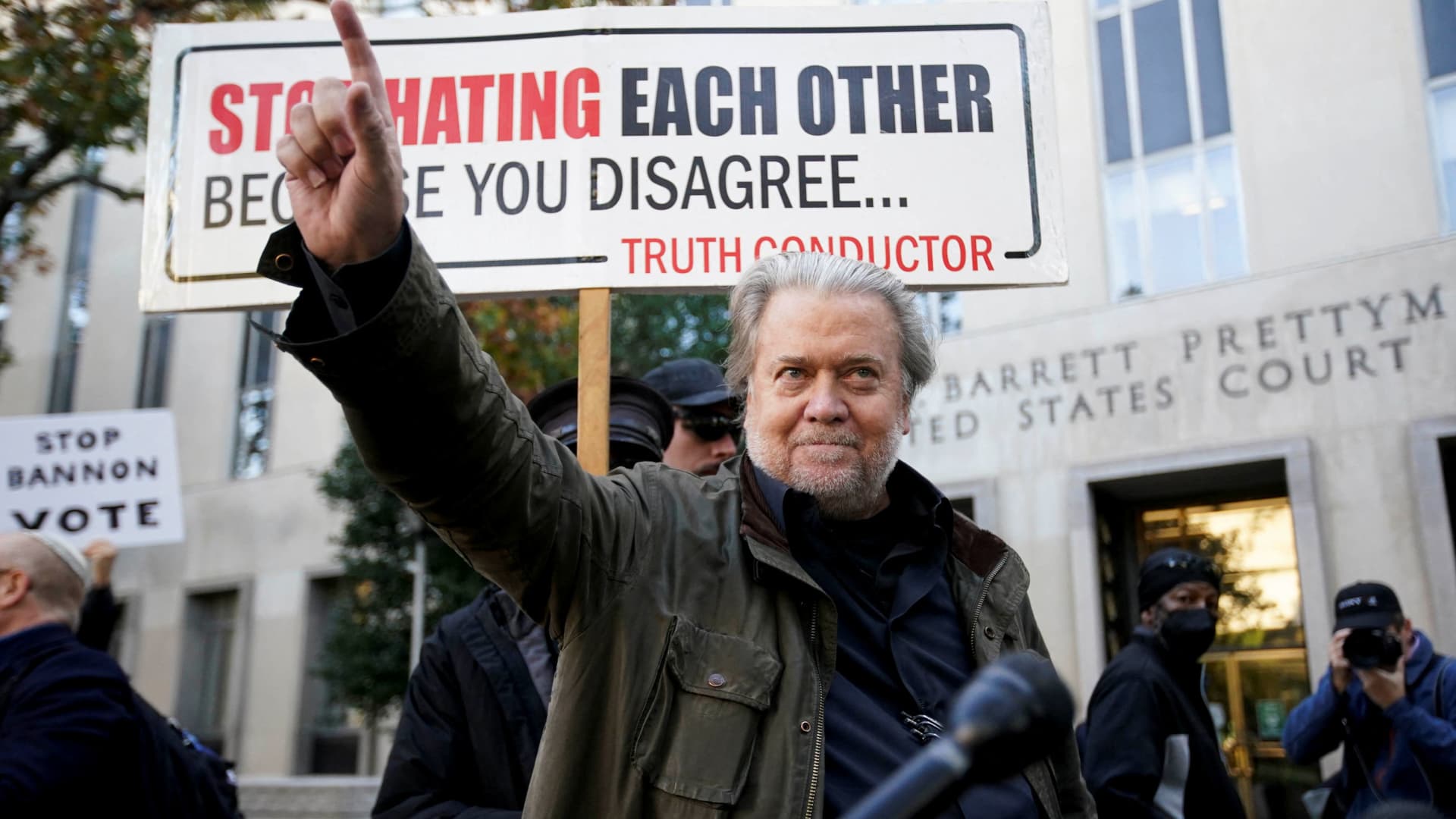 Steve Bannon, former White House chief strategist under former President Donald Trump, holds up a newspaper outside U.S. District Court on the day of his sentencing on contempt of Congress charges after refusing a subpoena from the January 6th committee, in Washington, U.S. October 21, 2022.

Former top Trump White House advisor Steve Bannon is set to be sentenced Friday for defying a subpoena from the congressional probe of the Jan. 6, 2021, Capitol riot.

The proceeding, set for 9 a.m. ET in U.S. District Court in Washington, D.C., could make Bannon one of the highest-profile figures to be locked up on charges related to the insurrection. He is expected to appeal his conviction.

Federal prosecutors want the court to sentence Bannon to six months in jail — the top end of the federal sentencing guidelines range — and the maximum fine of $200,000.

Bannon has asked federal Judge Carl Nichols for a sentence of probation. His lawyers also argued that the court should delay any sentence imposed until an appeals court could hear the case.

Bannon’s sentence came one year to the day since the House voted to hold him in contempt of Congress for refusing to comply with a House select committee’s subpoena for documents and testimony. Bannon was indicted in November on two criminal counts and convicted after a federal trial in July.

Bannon’s lawyer had argued that the subpoena would violate Trump’s executive privilege, the presidential power to withhold certain information from the public.

But Bannon reversed course days before his trial, saying he was willing to testify because Trump had agreed to waive his executive privilege claim.

Prosecutors called that a stunt. In a court filing Monday, they wrote that after Bannon’s gambit failed to delay the trial, “he never made any further attempt to comply with the subpoena—continuing up to this day.”

Attorneys for Bannon argued in part that Bannon should receive a light sentence because he was merely following his lawyer’s advice when he defied the select committee’s subpoena.

“The facts of this case show that Mr. Bannon’s conduct was based on his good-faith reliance on his lawyer’s advice,” the defendant’s attorneys wrote in a court filing this week.

But the Justice Department prosecutors said that Bannon “pursued a bad-faith strategy of defiance and contempt” from “the moment” he was served the subpoena.

“A person could have shown no greater contempt than the Defendant did in his defiance of the Committee’s subpoena,” they told the court.

“The rioters who overran the Capitol on January 6 did not just attack a building—they assaulted the rule of law upon which this country was built and through which it endures. By flouting the Select Committee’s subpoena and its authority, the Defendant exacerbated that assault,” their memo said.

This is developing news. Please check back for updates.