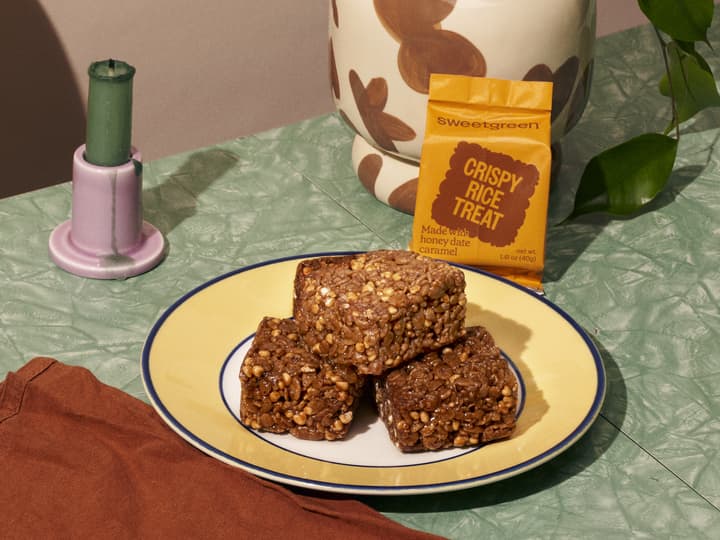 Sweetgreen is launching its take on Rice Krispies Treats, its first dessert since 2014.

The Crispy Rice Treat is available nationwide starting Monday for $2.95. The prepackaged dessert is made with organic brown rice, quinoa, millet and honey-date caramel. It has190 calories and 6 grams of sugar.

Sweetgreen co-founder and Chief Concept Officer Nicolas Jammet told CNBC the chain has its eye on possibly expanding further into dessert offerings. “We’ll continue to listen to our customers and see how they respond to the first one,” he said.

The salad chain’s only prior dessert was Sweetflow, a frozen yogurt that was briefly available at its stores in Washington, D.C., where the company was founded. It discontinued Sweetflow eight years ago, opting instead to focus on adding heartier options to its menu and implementing online ordering.

“Also, it was around the time when there were just a proliferation of frozen yogurt shops, all over the place,” Jammet said.

The launch comes as Sweetgreen looks for ways to push up sales. The company lowered its full-year outlook in August, citing a slowdown in sales that began around Memorial Day. Still, its second-quarter same-store sales climbed 16%, helped by a 6% hike in prices.

Sweetgreen is slated to report third-quarter results after the bell on Tuesday.

So far this quarter, McDonald’s, Chipotle and Starbucks have reported higher sales, indicating that customers are willing to shell out for more affordable quick eats as inflation squeezes budgets. That’s even as chains raise prices or market more premium menu offerings.

To create the new dessert, Sweetgreen teamed up with pastry chef Malcolm Livingston II as the company’s first chef in residence. Livingston previously worked as the head pastry chef for Noma, a Copenhagen restaurant with three Michelin stars that was named the world’s top restaurant in 2021.

Jammet said he met Livingston a few years ago in Copenhagen and he stayed in touch with the pastry chef. “Since day one, I was always coming into the [Sweetgreen culinary] lab,” Livingston said.

The chain took roughly two years to create the treat and ensure that it fit with Sweetgreen’s principles that blend taste, health and ingredient sourcing, according to Jammet. Livingston said he made many different iterations and used his daughter as taste tester.

It was a “no-brainer” to start with a version of the Rice Krispies Treat given the nostalgia it evokes, Livingston said.

“Also in fast food restaurants, there is a lack of variety when it comes to dessert, and we wanted to offer something that was delicious and craveable but also considered healthy,” he said.

Shares of Sweetgreen have fallen 46% this year, dragging its market value down to $1.88 billion.

As the hunt for missing Nicola Bulley continues, the 10 questions that remain unanswered

Why Northeast Asia-Ex China Is Ambivalent About CBDCs

Why Northeast Asia-Ex China Is Ambivalent About CBDCs

Prince Harry Would Have Married Chelsy Davy or Cressida Bonas Instead of Meghan if Princess Diana Were Still Here, Former Butler Says