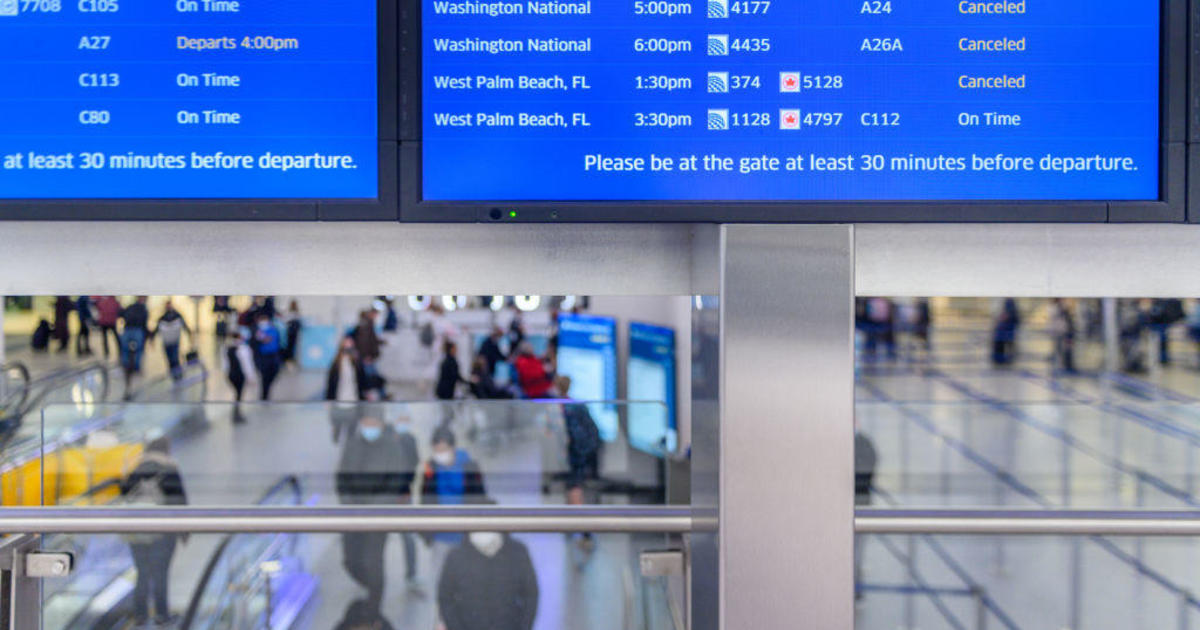 NEWARK, N.J. — The frustration at the airports is growing as a record number of fliers take take to the skies this holiday weekend.

On Sunday, delays and cancellations eased, even though airlines struggled to respond to a staffing shortage.

But for many, trying to catch a flight has been a miserable experience, CBS2’s Dave Carlin reported.

There were some tales of woe at Newark Liberty International Airport due to delays and cancellations that led to overnight stays in hotels rooms some were not expecting.

Dublin is a destination denied, so far, for Claudio Sandoval. The California resident was stranded in Newark, delayed by at least a day from meeting up with the rest of his family in Ireland.

On Saturday, his connecting flight from Newark was canceled and he was rebooked for Sunday night.

“I don’t really know if this is even going to happen,” said Sandoval, of Panorama City, California. “A family dream vacation that turns into a nightmare.”

Nationwide, there have been thousands of canceled flights since the start of the holiday weekend. Much of it has been blamed on under-staffing and a pilot shortage, in particular.

Some airlines preemptively cut flights from the summer schedule to try and avoid the chaos of doing it last minute.

“I don’t know why the airline don’t have enough personal stuff about the reason is. It was a strike as well. There are so many factors,” said Benjamin Howell of Berlin.

Howell was here to help friend Rebecca Wieland find a flight to Germany to replace her original cancelled one.

“I’m a student and I have my exams in two days, three days,” Wieland said.

READ MORE: No end in sight to July 4 weekend flight delays and cancellations amid staff shortages

Following up on a groom-to-be CBS2 met at Newark Liberty on Friday, Alam Khan of Boonton, New Jersey was stuck at the airport and in danger of missing his own wedding in Toronto.

“My suit’s all ready … the shoes ready to go. I have four sisters, my nephews here. Everyone’s waiting. The flight is canceled and I’m stuck here at the moment at Newark Airport,” Khan said.

When he was told his rebooked flight was canceled, he went by car, and he made it on time for the wedding. His more than nine-hour drive was a little rough but worth it.

Airline representatives are repeating this advice: Plan ahead and call your carrier before you get to the airport and even after that keep checking.