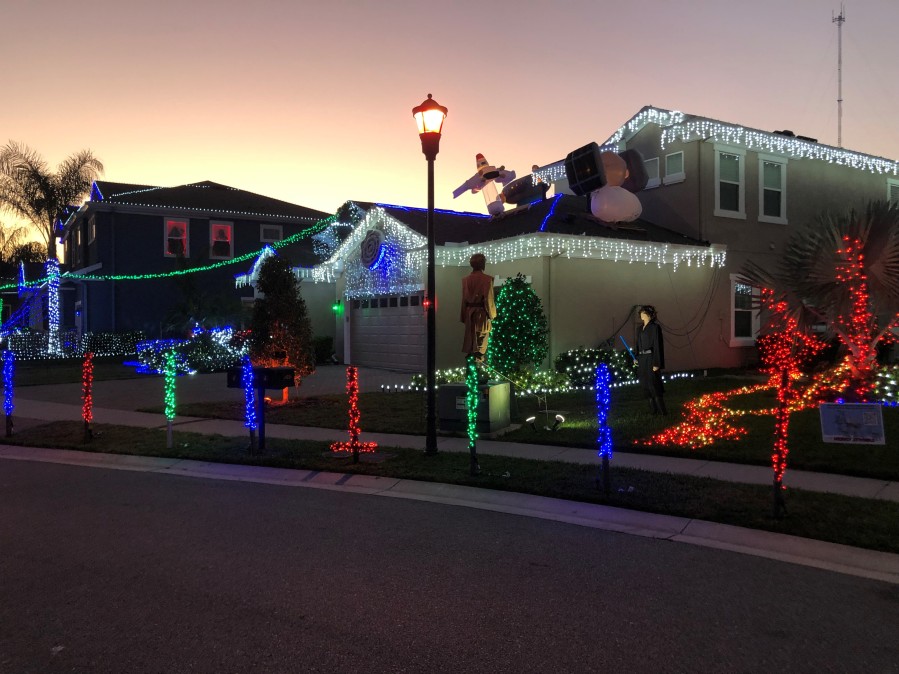 LITHIA, Fla. (WFLA) – This holiday season, you don’t have to go far to visit a galaxy far, far away.

Thirteen neighbors on Quintessa Lane in Fishhawk West are lighting up their cul-de-sac as part of a Star Wars-themed Christmas display.

It’s the third annual “Merry Sithmas”, featuring more than 100 custom-made lightsabers lining the street and some of pop culture’s most beloved characters.

“We started as three houses three years ago,” Jessica Bell said. “We’ve grown to 13 this year and its basically a synchronized light show that features Star Wars music and Christmas songs.”

New this year, the neighbors added more life-size mannequins of characters from the Star Wars universe, including C-3PO and R2-D2, Obi Wan Kenobi and Darth Vader.

“Last year are only real physical mannequin was Palpatine over here,” Bell said.

At every home, there’s an iconomic symbol from the sci-fi saga that’s been passed down from generation to generation since the premier of Star Wars: A New Hope in 1977.

“When we added the Death Star and setting the beam off so that way it does the sequence, it kind of says, wow you pulled off something totally illogical you didn’t think you could do with Christmas lights,” Dan Cheney said.

It takes a collective effort to pull of this elaborate Christmas light show. Bell’s husband is in charge of programming.

“He does all of the synchronizing of the lights to the music, to the Star Wars sound clips,” Bell said.

The setup begins during Halloween weekend and the galactic experience runs through New Year’s Eve.

“Seeing all the kids drive by and getting to meet people and say this is really cool, you guys really put a lot of time into it, is really what it’s about,” Cheney said.

This year the neighbors behind Merry Sithmas are helping out Floridians in need. They are raising money for the victims of Hurricanes Ian and Nicole.

There are QR codes on every lawn letting visitors know how they can donate.