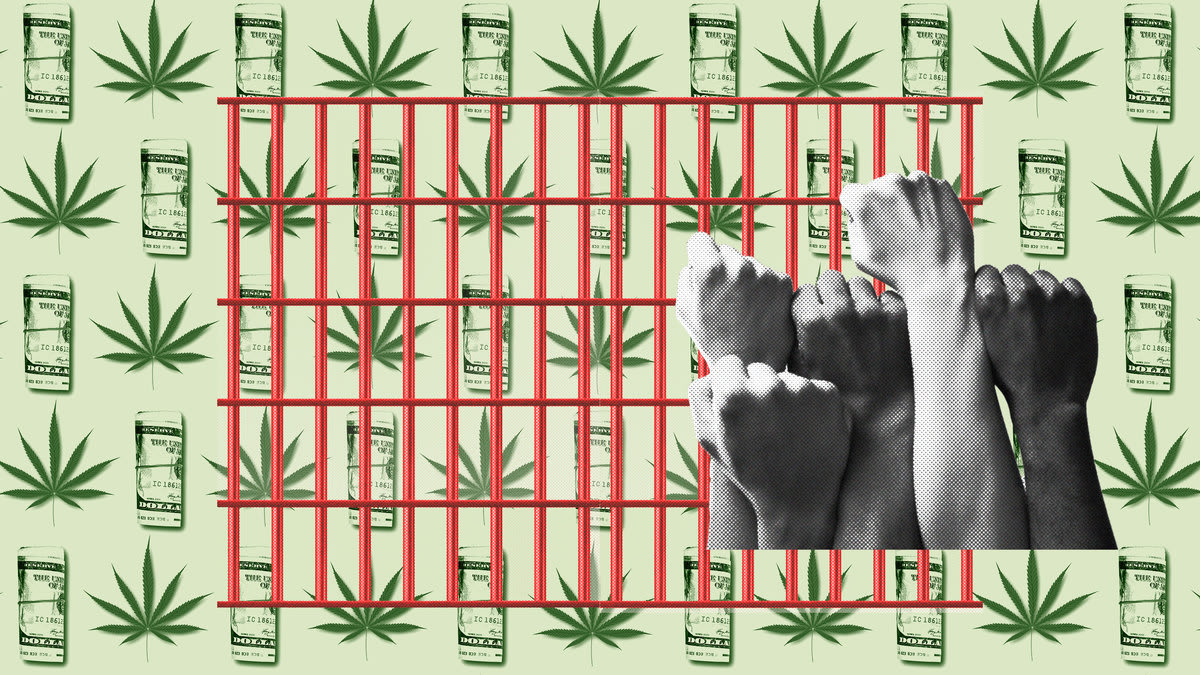 “Tis the season to get funding for your Cannabis Business with FundCanna!”

That’s a message that landed in my inbox yesterday. Fun! How can I start and grow a legal weed business? Maybe I should move out of Brooklyn, since every other storefront is now an unlicensed weed business, so there’s not much market share left—even for the few legal recreational dispensaries that received state licenses but have yet to open.

So where would I go?

“We provide Green for Green!” FundCanna promises. “FundCanna is here to help your company grow. By utilizing our financial products, you will be able to pay your bills faster, purchase more inventory, and scale your business.”

There is a lot of “green” in the legal pot industry. An assessment published last March by New Frontier Data found that new markets slated to legalize could inflate cannabis sales to $72 billion by 2030. According to Marijuana Business Daily, the average marijuana dispensary makes $974 in revenue per square foot of space, which is apparently a “higher” profit margin than Whole Foods. Great.

The growth of the legal marijuana industry has coincided with a heightened awareness of the War on Drugs and mass incarceration. Communities of color have, for generations, been ravaged by the bipartisan consensus to police people for a plant. And now we, as a society, apparently care about rectifying past sins. Also great.

On December 1, while visiting Princeton University, I posed for a photo with Michael Thompson and Kate Brown, the Governor of Oregon. Thompson was paroled in 2021 after serving 25 years (out of sentence that could have kept him locked up for up to 60 years) for selling pot to a police informant.

He has achieved a kind of celebrity in social justice circles through his work with the Last Prisoner Project, a large nonprofit devoted to freedom for drug prisoners. He tells his story with raw emotion that resonates among lawmakers, advocates, and business people who trade in marijuana.

He was at Princeton to speak at a panel with Gov. Brown and New Jersey Attorney General Matt Platkin. Both Brown and Platkin embrace criminal justice reform, with Brown recently issuing a large number of simultaneous pardons for people convicted of nonviolent cannabis-related offenses. As a result, more than 45,000 people’s records were cleared of those crimes—freeing them from the burden of paying outstanding fines.

Thompson broke down during the panel. “You can’t just keep throwing away humans,” he said. “I just want you to know the pain. I lost my family for 25 years.” Later at a reception where everyone nibbled on teeny finger foods, undergrads approached Thompson with veneration and thanked him for telling his story. He probably created a lot of converts to the cause of clemency because of the visceral reactions to his life story—which is, essentially, a Shakespearean tragedy.

In 2019, Michigan legalized pot. But at the time Thompson was behind bars, washing his orange jumpsuit in the toilet after almost dying of COVID. In the 25 years he spent incarcerated, his son and mother died. He went to her funeral in shackles. His three daughters grew up without a father. And two of them are currently homeless.

There have been admirable efforts to prioritize communities of color—or people directly impacted by the drug war—in the legal pot industry. States have passed laws allowing people with felonies on their records to operate dispensaries. Last month, when New York issued its first 36 cannabis dispensary licenses, many were reserved for people with prior cannabis convictions, The Guardian reported.

What if one of the Drug War’s victims wants to open a diner instead of a dispensary? Or buy a house? Or a car? Or send their kids to college?

Every person who benefits from the new legal weed industry—whether as a “pot-repeneur” or a state lawmaker balancing their budget thanks to legal weed—should be required to share in the largesse with Drug War victims and their families. In a 2020 paper in a special issue of Res Philosophica on mass incarceration, ethicists Jessica Flanigan and Christopher Freiman lay out an argument for reparations to victims of the War on Drugs.

Activist groups have lobbied for reparations. “It’s wrong for them to benefit off the same product that they incarcerated us with,” said Tyrone Muhammad, a founder of the group Ex-Cons for Community and Social Change.

“Look at how much money this city has taken away from Black and brown families for, like he said, small amounts of marijuana,” Greg Sherman, another member of the group, added. “It’s an injustice we must stand [against] right now.”

Recreational cannabis is now legal in 21 states. But efforts to promote direct investment in communities and individuals directly impacted by the Drug War have flagged.

In 2019, Illinois lawmakers passed cannabis legislation that was the most equitable so far, even including reparations. But it was never implemented—except in Evanston, where lower than projected marijuana tax revenue has delayed and hobbled the dispensation of cash. And according to Rep. Sheila Jackson Lee—who represents Evanston and advocates for federal reparations, Evanston is far ahead of other cities.

Overall, statewide, the reparations movement has been disappointing.

“Sadly, there has been no progress in advancing economic equity in the cannabis industry, and reparations for the War on Drugs have been abandoned altogether,” writes the activist group Action Network in a petition to Gov. J.B. Pritzker. The petition demands “regular, direct cash payments for Survivors of the War on Drugs… education, housing, and healthcare as compensation.”

A special task force in California launched by the state legislature released a report on racist drug enforcement arguing for reparations for Black Americans. But they’re not even slated to release the final report until July 2023. Compared to the rapid spread of legal and gray market marijuana dispensaries, the fact that nothing close to compensation for victims of the drug war has materialized strongly indicates a lack of political will, outside of activist circles.

Thompson’s 31 year-old daughter, Princess, told me about what life was like when her father went to prison.

“Every Christmas, I used to wish my Dad was coming back,” Princess, who cleans hotel rooms for a living, said. Earlier this year, she was sleeping in her car with her nine year-old daughter, but now they’re temporarily staying with her niece and her two kids in a two room apartment.

Princess went to the prison on the night her dad was released, joining the crowd as local news outlets snapped his picture during a press conference.

“It was funny, I was there when he got out, and he didn’t recognize me! I was like ‘Hey Daddy!’ and he was like, “Who are you?”

“I’m Princess, Daddy! And he laughed and said, ‘You’re all grown up!’”

Her sister, Evita, works 16-hour shifts at a nursing home and sleeps in her car Michael tells her she should get more sleep, but she’s desperate to own a home—in large part because she’s terrified that her mother or father will end up in a nursing home, where she says she regularly witnesses elder abuse.

Evita told me that when Michael went away, they lost the family’s house because her mother couldn’t cover the mortgage by herself. She also admits that she began acting out and started running around with boys.

“Dad was the disciplinarian in the family,” she said. Her mother, who fell into a deep depression when Michael went to prison, couldn’t keep her in line—and soon enough, Evita was a teen mother.

Twenty-five year-old Faith Canada lives in Shreveport, Louisiana. I spoke with her for a story about her father, Faith Winslow, who was serving life without parole after selling an undercover cop $20 of weed 2008. His sentence was what Michael has termed a “trap sentence” like his own. Because he had nonviolent priors, the pot arrest triggered Louisiana’s habitual offender law—essentially ending his life as a free person.

Winslow was released after the Innocence Project New Orleans took his case in 2019. A subsequent change in the law allowed them to argue ineffective counsel during the sentencing part of his trial.

Father and daughter bonded. He bought her a car. But in May 2021, Winslow was found dead in a parked car in Shreveport. He’d been shot, the victim of an apparent robbery. The car has since broken down. Canada doesn’t have the $3,000 for a loan to get a new one.

I also previously profiled 42-year-old Crystal Munoz who gave birth, shackled, while serving a 20 year federal sentence for conspiracy to distribute marijuana. Munoz’s role in the “conspiracy” was to give a hand-drawn map to former friends who planned to smuggle drugs. They took plea deals and testified against her at trial.

The government took her baby away the day after she gave birth. Munoz told me that she just screamed and screamed until the guards told her to quiet down. She served over 12 years before she was released. While it’s possible to calculate relative lost wages for a low-income person’s time in prison, you can never repay the cost of taking away a child from their mother for 12 years.

We can’t change the past. But we can begin to rectify past sins by giving the victims of the Drug War the most tangible thing available: money.

Michael Thompson is rebuilding his life. He’s even the subject of a short documentary, The Sentence of Michael Thompson, that’s been a hit on the film festival circuit (winning an audience award at SXSW), is touted as an Oscar contender, and is co-distributed by MSNBC.

During a segment on his show discussing the film, MSNBC host Ari Melber wagged his finger at viewers accusingly: “Even as some people make a lot of money off selling marijuana inside the United States today, other people are still having their lives upended, sometimes ruined, over simple marijuana use arrests.”

But the injustice done to Thompson was not rectified when a parole board granted him his freedom for a nonviolent crime after 25 years.

And Thompson isn’t even fully free. He’s on probation. He can’t work for dispensaries. His daughters’ hardships weigh on him. “When your kids are in trouble, it’s like a mental incarceration,” he says.

The government that created the unjust laws which still cause devastation to his family today ought to provide some relief, some freedom from their burden, to Thompson’s family. And the government can do that, rather easily, by taking some of the enormous tax revenue it will receive from the legal marijuana industry, and paying just a small portion of it back to the government’s Drug War victims.