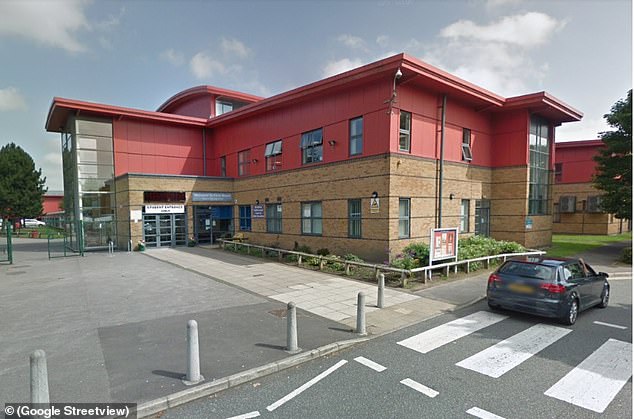 Teenage girl, 14, is rushed to hospital after being stabbed at school – as police question arrested 14-year-old boy

A 14-year-old girl has suffered ‘serious’ injuries after being stabbed at a south Manchester school, and a boy of the same age has been arrested.

The Chorlton and Didsbury division of Greater Manchester Police (GMP) said officers were called to reports of an incident at Parrs Wood High School on Tuesday afternoon.

A teenage girl was found with ‘serious though not life-threatening injuries’ believed to have been caused by a ‘sharp object’, the force said.

The 14-year-old girl was attacked at Parrs Wood High School (pictured) in Didsbury at around 1.10pm

She was taken to hospital for treatment and is being supported by specialist officers.

A 14-year-old boy was arrested at the school on Wilmslow Road, East Didsbury, and taken for questioning.

GMP said it is working with the local authority and the school to support children impacted by the incident.

Anyone who witnessed the incident or anyone who has any information should contact police on 101, quoting log number 1472 of 24 January 2023.