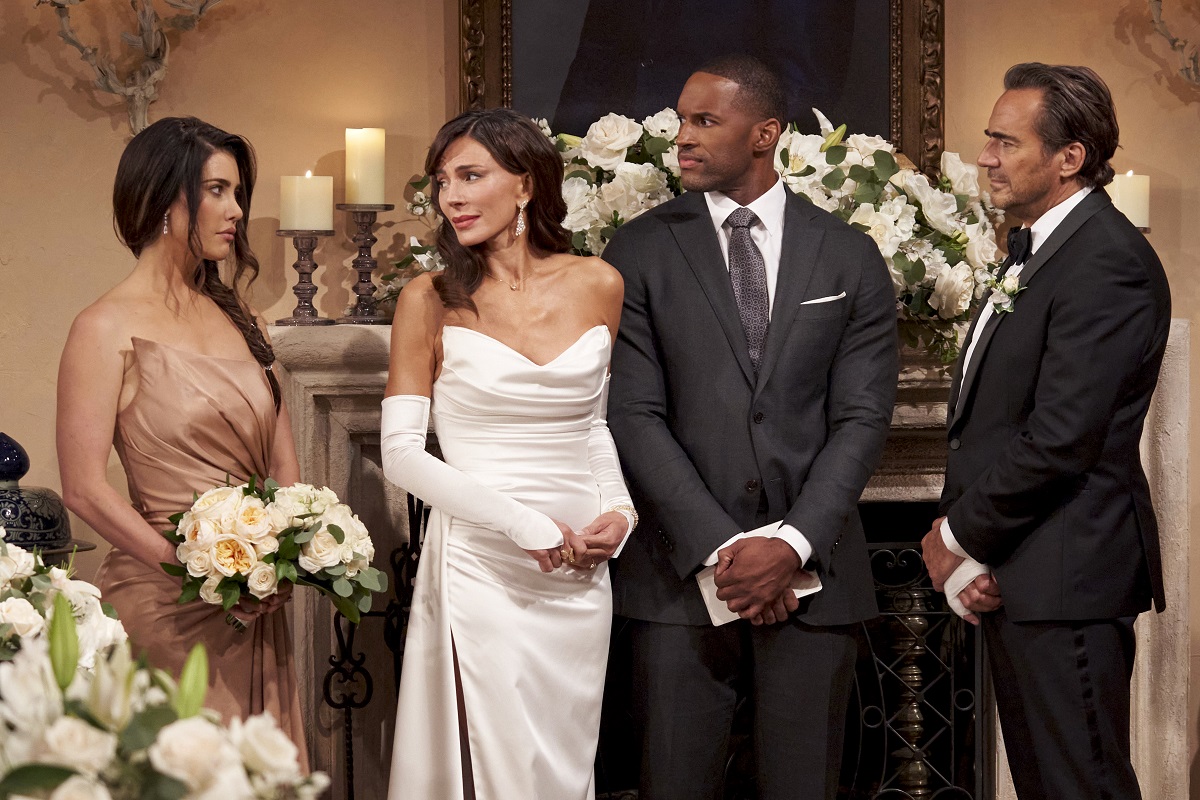 The Bold and the Beautiful spoilers for Nov. 28 through Dec. 2 reveal trouble at Tridge’s wedding. As the couple prepares to say “I do,” a guest holds the couple’s future in their hands. Here’s a glimpse at the upcoming week.

Steffy Forrester (Jacqueline MacInnes Wood) should be on cloud nine as her parents’ wedding day approaches. However, the Forrester CEO will be in a could mood on the big day because of her brother Thomas Forrester (Matthew Atkinson). After Douglas Forrester (Henry Joseph Samiri) told her about Thomas making the CPS call, Steffy confronted her brother.

Steffy is furious about Thomas’ scheme in Ridge Forrester (Thorsten Kaye) and Brooke Logan’s (Katherine Kelly Lang) break up. The CPS call caused Ridge to leave Brooke and reunite with Taylor. While Steffy would love nothing more than to see her parents reunite, she doesn’t want it to be because of a lie.

RELATED: ‘The Bold and the Beautiful’: Steffy Carrying on Grandmother’s Legacy by Destroying Bridge’s Marriage

According to Celeb Dirty Laundry, The Bold and the Beautiful spoilers suggest Steffy will have a big decision. Does she tell Ridge and Taylor about Thomas’ scheme? Or will she keep quiet to get her wishes for a family reunion? Either way, her choice will alter Tridge’s future.

Stephen Logan returns for a visit

Speaking of family reunions, the Logans sisters are surprised when their dad Stephen Logan (Patrick Duffy), visits. But Stephen’s not only, but his new girlfriend Lucy (Linda Purl) is also with him. The family will have much catching up to do since Stephen’s last appearance 11 years ago.

Brooke’s split with Ridge will be a topic of conversation. Stephen will be sympathetic to his daughter’s feelings and offer her words of wisdom regarding love. Will his words give Brooke hope that she and Ridge are destined to reunite?

Two notorious villains living under one roof are bound to create trouble. Deacon Sharpe (Sean Kanan) enjoys having his roommate/lover Sheila Carter (Kimberlin Brown), in his apartment. However, tensions are rising in Casa Sharpe. According to Soap Dirt, The Bold and the Beautiful spoilers reveal that Sheila and Deacon argue.

RELATED: ‘The Bold and the Beautiful’: Kimberlin Brown Says This Man Is Sheila’s Soulmate

Deacon’s have a lot to worry about harboring a fugitive. He and Sheila have already had many talks about her hiding. However, this isn’t the source of the couple’s latest verbal spat.

Like many other characters, their topic of conversation is the Brooke, Ridge, and Taylor saga. Sheila and Deacon find themselves at odds over the situation. Naturally, Deacon will feel sympathy for his ex Brooke. Meanwhile, Sheila will be on the side of her former friend Taylor.

Sheila’s already shown signs of jealousy because of Deacon’s feelings for Brooke. Hearing Deacon defend Brooke will spark Sheila’s outrage, and we all know how dangerous she can be when angry.