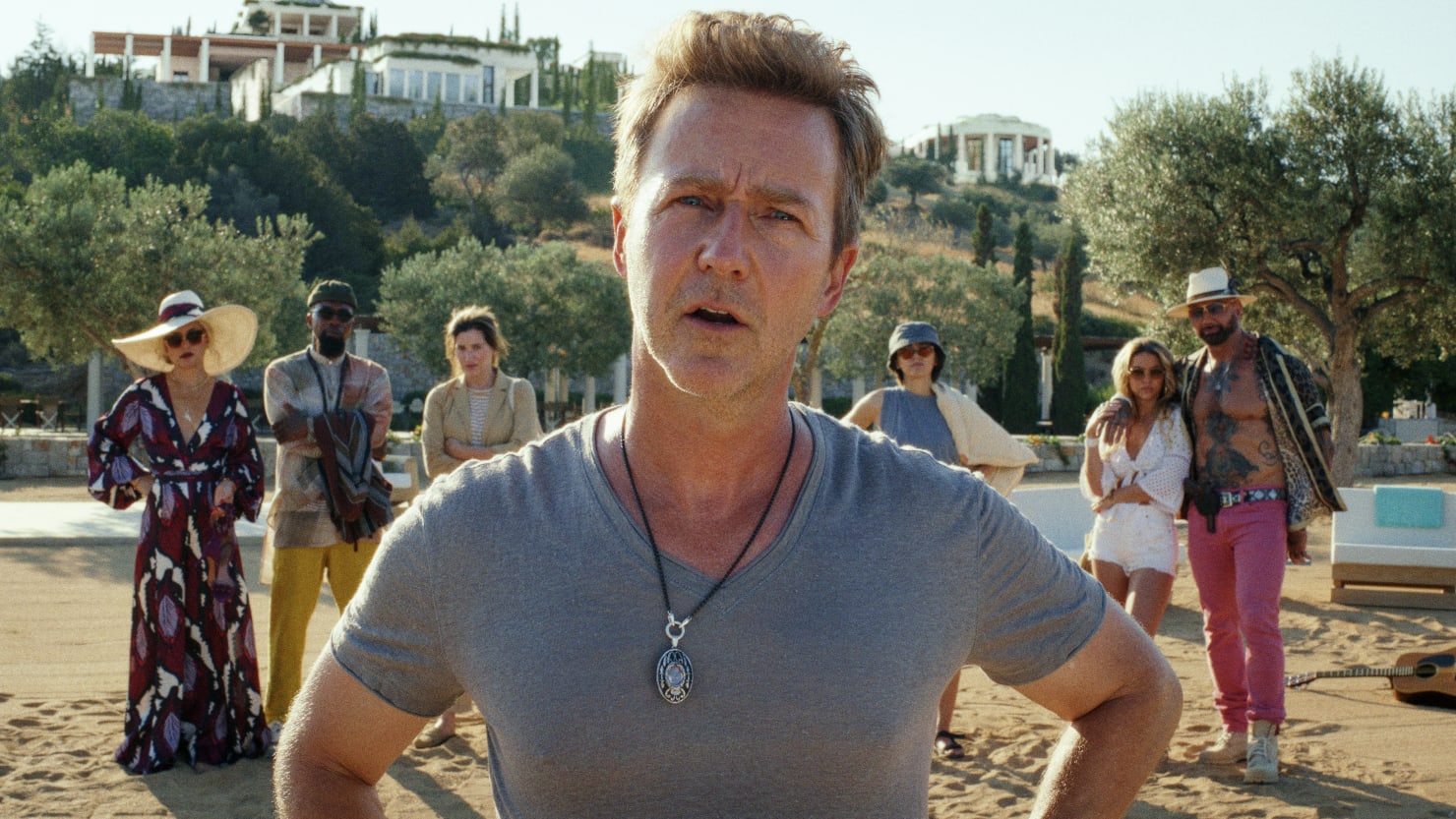 All these “eat the rich” storylines have started to sound similar. An array of wealthy freaks—sporting kimonos in poor taste and nasty attitudes—line up to board a private cruise to a far-off destination. Secluded from the rest of the human world (would it be a stretch to call these folks aliens?), the billionaires cozy up to one another, flaunting their wealth in the most hilarious fashion. But chaos ensues over a sudden death, potentially a murder.

No, we’re not talking about The White Lotus or Triangle of Sadness. This time, the bloodthirsty rich folks are in Glass Onion, Rian Johnson’s stellar sequel to his hit 2019 murder mystery Knives Out. Taking place at the beginning of the pandemic, the follow-up homes in on a whole new group of crime suspects: a handful of affluent friends, tied together by one pompous CEO, who voyage off to Greece to visit him on his new island. It’s decked out with a glass onion sculpture as the centerpiece—hence the name.

Our beloved Southern detective Benoit Blanc (Daniel Craig) joins the group on their trip, to his own surprise—but he soon finds out he’s actually an uninvited visitor. Nevertheless, there’s a death just a few beats into the movie, giving him a new case to solve. Who’s the murderer—if there is one—and how did they pull it off? Let’s crack out our spyglass and get into the clues.

Warning: Spoilers ahead for Glass Onion: A Knives Out Mystery.

No one knows why Andi shows face at this event—she’s been furious with Miles for months, after he claimed the idea for their technology company, Alpha, even though she mocked up all the blueprints. Andi doesn’t trust Miles at all, nor his posse of like-minded “resistors,” especially as they continue to pledge their support for his flawed new invention: Klear, an incredibly dangerous alternative fuel that he claims will change the world.

Why is Andi back with the crew, and who the hell invited Benoit Blanc here too? In a mid-film flashback, we learn that “Andi” is actually her twin sister, Helen Brand (also Monáe). Andi actually died by apparent suicide days earlier, turning her car on in a closed space with sleeping pills in her system, but Helen suspects one of her shifty ex-friends actually killed her. After she receives the invite to Miles’ island party, Helen calls up pro Benoit to crack the case.

Helen suspects that one of Andi’s ex-friends committed the crime because of their nasty break-up. Years ago, Miles tried to persuade Andi to sign onto his “Klear” project, but she wouldn’t budge. So, with nowhere left to turn, Miles forced Andi out of the company, claiming Alpha was all his IP. But it wasn’t, and Andi later found the evidence to prove it: a cocktail napkin in her handwriting laying out the entire company. There it is, plain and simple. Before her death, she sent an email with a photo of the napkin to her ex-BFFs, which could be why one of them killed her—to stay in Miles’ ranks.

Now, playing Andi and suppressing her death statement from the press, Helen acts like her deceased twin sister in order to figure out which of Miles’ slimy crew killed Andi. But before the duo can figure out the case, another murder shocks the crowd: Duke suddenly falls dead after revealing some sort of Google Alert on his phone. Another twist—he was sipping from Miles’ cocktail glass right before he croaked. Miles immediately assumes one of his friends is out to kill him.

While everyone had the motive and opportunity to murder Andi (each one of the five visited her at her home and tried to bang down her door, but found no success), Benoit doesn’t take long to solve the whodunnit. It’s Miles who has blood on his hands. He killed Andi after she unveiled the cocktail napkin, worried about the future of his company.

But what about Duke? While using Whiskey as a sex pawn to convince Miles to hire him at Alpha News, Duke finds the most incriminating evidence on Miles. No one knows about Andi’s death until that news alert pops up on Duke’s phone. Having driven past Miles on his way to Andi’s house on the day of her death, Duke puts two and two together. Miles did the deed. Instead of announcing her death to the room, Duke attempts to blackmail Miles into giving him a spot at Alpha News. Duke protects Miles, Miles promotes Duke: a balanced(-ish) deal.

Miles, though, doesn’t want anything to do with Duke after his men’s rights rants. So, in an attempt to extricate himself, Miles makes the quick decision to kill his friend. Miles pours Duke’s allergen—pineapple juice—into his own cup and passes the glass off to Duke, an easy way to feign innocence. Duke dies after drinking from Miles’ class, and Miles can point his finger around the room at anyone else.

Meanwhile, Helen finds the original cocktail napkin in Andi’s handwriting among Miles’ things and threatens to release it to the public. But she’s too slow: Miles burns the damning piece of evidence. Benoit throws in the towel, but gives Helen one last chance to incriminate Miles first—he hands her the Klear crystal, which has proven to be unsafe around fire and glass. Helen breaks all the objects she can get her hands on in the titular glass onion, setting the whole thing ablaze thanks to some fire and the Klear crystal. Miles’ whole life is burnt to the ground in seconds flat—even the Mona Lisa, which he rented from the Louvre, is browned like a piece of toast.

While real-life tech billionaires trample all over our favorite social media platforms and ruin our lives—Elon Musk; Mark Zuckerberg; you get the gist—Glass Onion skewers their selfish escapades, thanks to brilliant writing from Rian Johnson and a snarky performance from Edward Norton. Even better is that Helen gets the final word on the matter, aided by plenty of insults coming from wise Benoit Blanc. “You’re just so stupid,” Benoit shouts at Miles near the end of the film, with not a peep from Miles, who seems to agree that he’s an idiot.

Because in the end, most “brilliant CEOs” have a few skeletons in their closet. The Dropout recently dramatized the pseudoscience behind Elizabeth Holmes’ fraudulent Theranos concept. WeCrashed charted the rise and fall of WeWork, one of the country’s biggest start-ups. And, of course, The Social Network showed us all a decade ago how much of a scumbag Mark Zuckerberg really was (and, probably, still is).

So, while none of Glass Onion is based in real life (Jared Leto does not have a hard kombucha brand—yet), the ending was still relevant. Hopefully Elon Musk has the chance to watch this scathing critique of folks like him, who continue to boast halfwittedness on the daily.