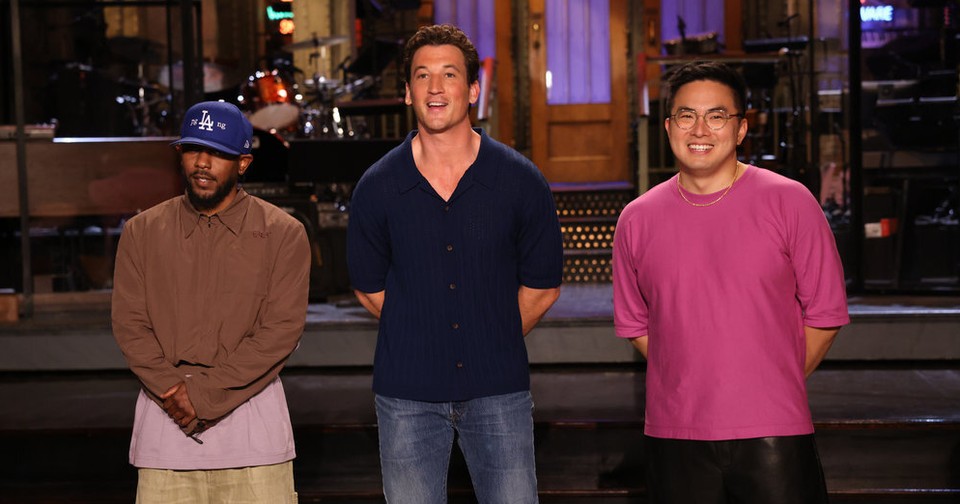 At the Emmy Awards in September, the show’s creator and executive producer, Lorne Michaels, admitted that SNL was headed for a period of reshuffling. “This will be transition year,” he said backstage. “Change years are always difficult but always exciting.” Four new featured players joined the cast, restocking some of the rank and file. But questions about how the ensemble will gel after so much transition and who among those members will shine hang on the horizon.

SNL swiftly called attention to that flux last night with a sketch within a sketch from the first-time host Miles Teller and the cast member Andrew Dismukes. Playing Peyton and Eli Manning, the actors commented on the cold open—a purposely campy political sketch featuring Donald Trump trapped at Mar-a-Lago during Hurricane Ian—via their Monday Night Football series Manningcast. That hyperbolically terrible premise made fun of SNL’s past missteps, including when it has pursued what Seth Meyers calls “clapter”: an audience’s agreement rather than laughter. “The show’s in a rebuilding year for sure,” Teller quipped.

The running meta-commentary also teased Bowen Yang, who has been creating a spotlight for himself in years prior and seems poised to take on a bigger role this season. Playing the Chinese President Xi Jinping, Yang intentionally bumbled his line and mugged to the camera. “It’s a surprising fumble from the veteran Yang,” Dismukes as Eli said. “He was supposed to take a step up this year, but you can tell the pressure is getting him.” It didn’t in actuality. Bowen appeared in the majority of the sketches, including as a combative spotted lanternfly and as himself on the recurring game show Send Something Normal, which awards $100 million to male celebrities who “reply to a woman’s DM on Instagram in a way that is normal.” Yang’s previously respectful answers had helped him win $1.4 billion, but this time he struggled when asked to answer a message from Dua Lipa.

The zestful energy of the cold open carried through the rest of the episode, which delighted in exploring the absurd. In an early sketch that felt plucked from the more imaginative and edgier 10-to-1 spot, Teller played Toby, a young Charmin bear that disappoints his father (a lively depiction from Kenan Thompson) when he announces that he’d rather dance than attend Toilet Paper College. Later, a McDonald’s ad campaign starring classic characters such as Birdie and Mayor McCheese revealed Grimace in a new light: as buffer and bisexual.

The musical guest and hip-hop powerhouse Kendrick Lamar didn’t match the episode’s spirit, delivering muted performances of his tracks “Rich Spirit,” “N95,” and “Father Time” from his latest album, Mr. Morale & The Big Steppers. Given SNL’s supposed instability, leaning into big-name hosts and performers seemed like the obvious workaround, but where Teller knew the assignment and responded accordingly, Lamar appeared content to clock in and clock out.

In recent years, between the seriousness of the pandemic and the challenge of satirizing already outrageous political and pop-cultural situations, SNL has struggled to find a relevant tone. But last night signaled surprising potential. In many ways, the episode’s vitality recalled the “transition year” that the SNL alum Bill Hader experienced after Kristen Wiig, Andy Samberg, and the writer John Mulaney departed in 2012. “We were like, ‘How is this going to work?’” he said in the oral history Live From New York. “Everyone just raises their game.” Last night, the cast did just that.

SNL operates first and foremost as a group effort, but it’s always done best—in terms of both ratings and cultural cachet—when there are clear stars elevating the ensemble and the very feel of comedy. It’s why we laud Dana Carvey, Will Ferrell, Wiig, Hader, and McKinnon. Although the show clearly wanted to focus on Yang’s wry talent, he wasn’t the only one to buoy the episode. The cast stepped up together, achieving a noticeably playful premiere.

What this season will bring—tonally, comedically, and critically—remains to be seen. Throughout SNL’s lengthy history, the show’s next big talent hasn’t always been immediately clear. At the outset of the 48th season, the possibilities are there for the taking, but maybe the point, this time at least, is reaching for them together.