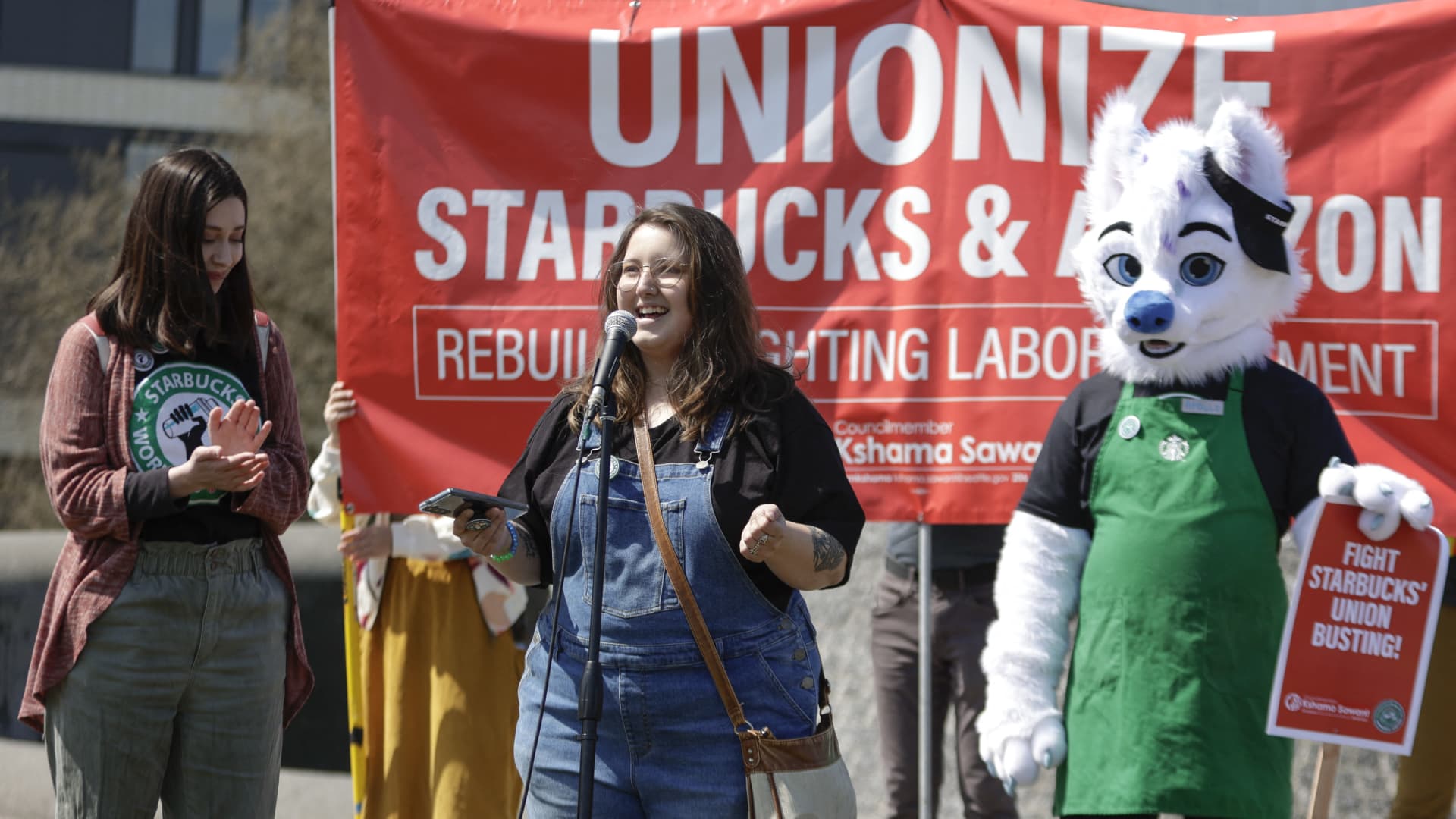 Hannah Whitbeck (C) of Ann Arbor, Michigan, speaks as Alydia Claypool (L) of Overland Park, Kansas, and Michael Vestigo (R) of Kansas City, Kansas, all of whom say they were fired by Starbucks, listen during the “Fight Starbucks’ Union Busting” rally and march in Seattle, Washington, on April 23, 2022.

The union movement that kicked off across the country more than a year ago has continued its momentum in 2022, with workers in warehouses, coffee shops, grocery stores and airlines pushing for representation.

Working conditions during the pandemic pushed many of these frontline workers to organize, but fears about the economy and a potential recession could stand to curb the union boom if the job market shifts.

Unions can help workers secure better pay, schedules and job security through contract agreements, but some organizers claim their employers retaliate against them and endanger their livelihoods.

Workers like Robert “Rab” Bradlea, 32, are willing to take on this risk, despite recession talk. Bradlea scaled back his hours at Trader Joe’s Wine Store in New York City and picked up a second job as he and some of his coworkers sought to unionize.

Bradlea said the move to organize under the United Food and Commercial Workers International Union had the support of most of his coworkers. Some opposed joining a union, either because of previous experience or fear of losing their jobs. But Bradley thought only he and his fellow organizers were putting themselves at risk.

“I thought they would look for ‘bad apples’ and weed out organizers specifically, rather than torch an entire store,” Bradlea said.

Instead, before the beloved wine store could even file a petition for a union election, Trader Joe’s abruptly closed the location on Aug. 11, telling employees that same day. Trader Joe’s spokesperson Nakia Rohde said in a statement to CNBC that the grocer opted to close the “underperforming” store to support its Union Square grocery store using the wine shop’s space ahead of the holiday season.

So far, this year has proved to be a success for the labor movement. Union petitions from Oct. 1 through June 30 were up 58% over the prior year, to 1,892, according to the National Labor Relations Board.

By May of this year, petitions for the year had exceeded the total number of filings in all of last year. The NLRB has yet to release full year data, but a CNBC analysis of filings shows nearly 900 more petitions in fiscal year 2022 over last year’s numbers.

This comes at a time when public approval of labor unions continues to climb. Recent Gallup data show  71% of Americans now approve of labor unions, up from 68% last year and 64% pre-pandemic. The measure is at its highest level on record since 1965.

“Right now in the retail space, we have so many more jobs than we do workers, and that puts disproportionate power in our hands right now because the company needs them almost as much as we need them,” said Hannah Smith, an employee at the recently unionized REI store in Berkeley, California.

REI did not respond to a request for comment from CNBC.

The shift in the balance of power has led some employers to hike pay and enhance other benefits. For example, Amazon said on Wednesday that it’s hiking average hourly pay from $18 to more than $19 for warehouse and delivery workers. The announcement comes ahead of its annual Prime Day promotion and a busy holiday season, as well as a union election in Albany next month.

As the Federal Reserve continues to aggressively raise interest rates to fight inflation and cool down the economy, market watchers, economists and executives are warning of a potential recession in 2023. If the economy cools off, the union movement may follow suit, according to Catherine Creighton, director of Cornell University’s Industrial and Labor Relations branch in Buffalo. But it seems unlikely in the short term.

“I think it will certainly make it more difficult if we do have a recession, where it’s harder for employees to find other employment, they [may] be less likely to take the risk of unionization,” Creighton said. “I don’t see that we are in that position at this point, because employers are still having a really hard time filling jobs, the baby boomers have retired and all evidence points to the fact that the labor market is going to be favorable to employees in the near future.”

For now, advocates believe the momentum will be hard to slow down. Whether it’s petitions or other wins, like a California law that creates a council to govern the fast-food industry labor conditions, 2022 has been a banner year for organizing.

“I think it’s the collective action that you’re seeing that isn’t going to get stopped by whatever the recessionary forces are, because working people have walked through fire during this pandemic, showed up every day to work, in many cases risk their lives,” said Mary Kay Henry, president of the Service Employees International Union. “And they’re ready to expect more in their work life and demand dignity and respect on the job.”

Some employees say interest in organizing has fallen somewhat as their employers appear to fight back, using tactics like shuttering stores, firing organizers and offering tantalizing benefits to non-union shops only.

At Starbucks, for example, the number of union petitions fell every month from March through August. There was a slight uptick in September with 10 petitions filed so far, according to the NLRB.

Since interim CEO Howard Schultz returned to the company in April, Starbucks has adopted a more aggressive strategy to oppose the union push and invest in its workers.

In May, the company announced enhanced pay hikes for non-unionized stores and extra training for baristas that went into effect in August after holding feedback sessions with its employees. The union has said the coffee giant is illegally withholding the benefits from cafes, but Starbucks maintains it cannot offer new benefits without negotiations for union shops. Legal experts predict the benefits battle will wind up before the NLRB.

Tyler Keeling works as barista trainer at a Starbucks in Lakewood, California, which has voted to unionize, and also is organizing other stores with Starbucks Workers United. He said the additional benefits not being offered to unionized stores has both intimidated and motivated people, and that better pay is important in this economic climate.

“People are seeing that Starbucks is willing to kind of mess with their livelihood to prevent this union, and that scares people. But at the end of the day, as far as it is driving people to not organize, it’s also driving people to organize,” Keeling said.

He added that he believes once the union makes continued progress on having fired workers reinstated and is successful in having benefits extended to union stores, there will be more headway made on petitions.

And stores are still pushing for more despite the threat of a looming recession. Billie Adeosun, Starbucks barista and organizer in Olympia, Washington, said unionizing is a “big risk,” claiming losing your job is a “real possibility,” but the prospect of successful contract negotiations with better pay and benefits is a motivator.

“Most of us make $15 to $18 an hour and none of us are working 40 hours a week, and that’s just not a living wage,” Adeosun said. “A lot of us have to get a second job or rely on government assistance to pay our bills, so yeah, we are terrified to be doing this work in spite of the economy and the fact that it is just falling apart right in front of us.”

About 240 locations out of its 9,000 company-owned cafes have voted to unionize as of Sept. 22, according to the National Labor Relations Board. But contract negotiations could help or hinder the push to unionize the nation’s largest coffee chain.

BTIG analyst Peter Saleh said signs of progress on a contract between the union and Starbucks could be one catalyst to reaccelerate organizing. On the other hand, if they don’t reach an agreement, workers can vote to decertify the union after a year.

So far, Starbucks has only begun negotiating with three stores, two in New York and one in Arizona. But the company said Monday that it sent letters to 238 cafes offering a three-week window in October to start negotiations.

And despite the petition slowdown at Starbucks, organizers’ success has inspired workers elsewhere, like Bradlea, the Trader Joe’s employee.

“Their stores are about the same number people as the Trader Joe’s wine store. This is doable, and they’re succeeding at it,” he said.

Power in the balance

Even with talk of a potential recession, some workers say they’re undeterred, given the competitive job market. Brandi McNease, organizer at a now-closed location of Chipotle Mexican Grill in Augusta, Maine, said the decision to petition was driven by the power workers have and the current economic climate.

“We looked around at the endless now-hiring signs plastered on every fast food drive-through menu and decided that we could just quit and take another job or we could fight, and if we lost, still take another job,” McNease told CNBC in an email.

The store was the first to file for a union election at the burrito chain, and the company said the location was permanently closed due to staffing challenges, not the union petition.  Workers called the move retaliatory and have filed multiple unfair labor practice charges against the company with the NLRB, McNease said.

Some workers say the last recession has informed the need for better worker protections today, and now is the time to push.

“I had coworkers who lived through the 2008 recession and had a really tough time finding jobs then,” said Smith, the REI employee in California. “Creating a union now, it felt like a way to protect for that in the future.”