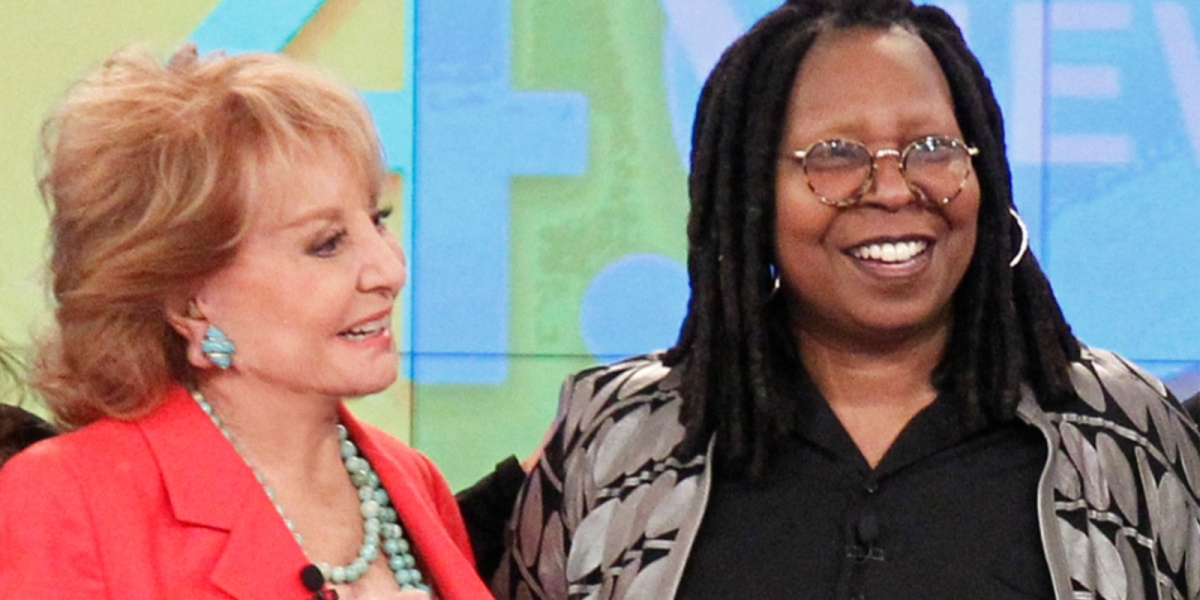 Whoopi Goldberg shared a message directed toward Barbara Walters during The View‘s Monday, Sept. 26 episode. The View moderator, who credits Walters with reviving her career, spoke of the notoriously private former newswoman. The latter left the daily ABC news series eight years ago and has remained out of sight ever since.

Goldberg won an Oscar in 1991 for Best Supporting Actress in the film Ghost. After winning the prestigious award, the actor began to star in more high-profile films such as the Sister Act franchise, Corrina, Corrina, and The Lion King.

Her career stalled after she allegedly joked about President George W. Bush in 2004. Bush’s name was included as part of a joke Goldberg made in 2004. According to The Guardian, Goldberg said, “We should keep Bush where he belongs and not in the White House.”

According to Deadline, Goldberg had a rough time career-wise after the controversial joke. She later confirmed the quip wasn’t about the president. “I would describe that situation as many people covering their backsides,” she explained.

“The joke was never about him, but no one ever stood up and said this was what actually happened. They put it in a newspaper, but everybody has to say you said it, and that’s what happens.”

Goldberg shared an update on Walters with fellow The View co-stars Ana Navarro, Sunny Hostin, Sara Haines, and Alyssa Farah Griffin. Walters has stayed out of the spotlight, living a private life since leaving the series in 2014.

Goldberg shared birthday wishes for The View creator, who turned 93 on Sept. 25.

As a photo of Walters appeared on the screen behind the hosts, Goldberg said: “To the one and only Barbara Walters, who had a birthday yesterday, we wanna say, 27 never looked so good!”

Goldberg and Walters have a special friendship, and the actor says Walters saved her career.

“Barbara Walters, God bless her, said, ‘I need another person. Would you ever consider?’ And I was like, ‘Yes.’ Because I had gone through all of my savings,” Goldberg explained. ”You know, taking care of your family, everything is sitting on you. And so, I went through everything, and she gave me a job; I’m grateful for that.”

Fans reacted to the mention of Barbara Walters on ‘The View’

On The View‘s Instagram page, the show shared a birthday tribute to its creator. It read, “We’re sending birthday love to the woman who started it all, Barbara Walters! Happy birthday!” Fans reacted to the post and shared their commentary regarding the legendary newswoman and The View creator.

“I’m just happy she’s still with us,” wrote one viewer.

“Sure wish she’d come on The View once in a while so we could hear from her,” shared a second fan.

“You are so loved and respected by so many of us around the globe. Your warmth always came through in everything you did,” a third Instagram user penned. “So many of us miss seeing you. You should only be surrounded by people who love you at this time of your life.”

“Happy birthday; it would be nice to hear updates sometimes on her well-being,” noted a fourth fan.

RELATED: ‘The View’: Whoopi Goldberg Confesses You Have to Have a ‘Thick Skin’ to Work on ABC Talker