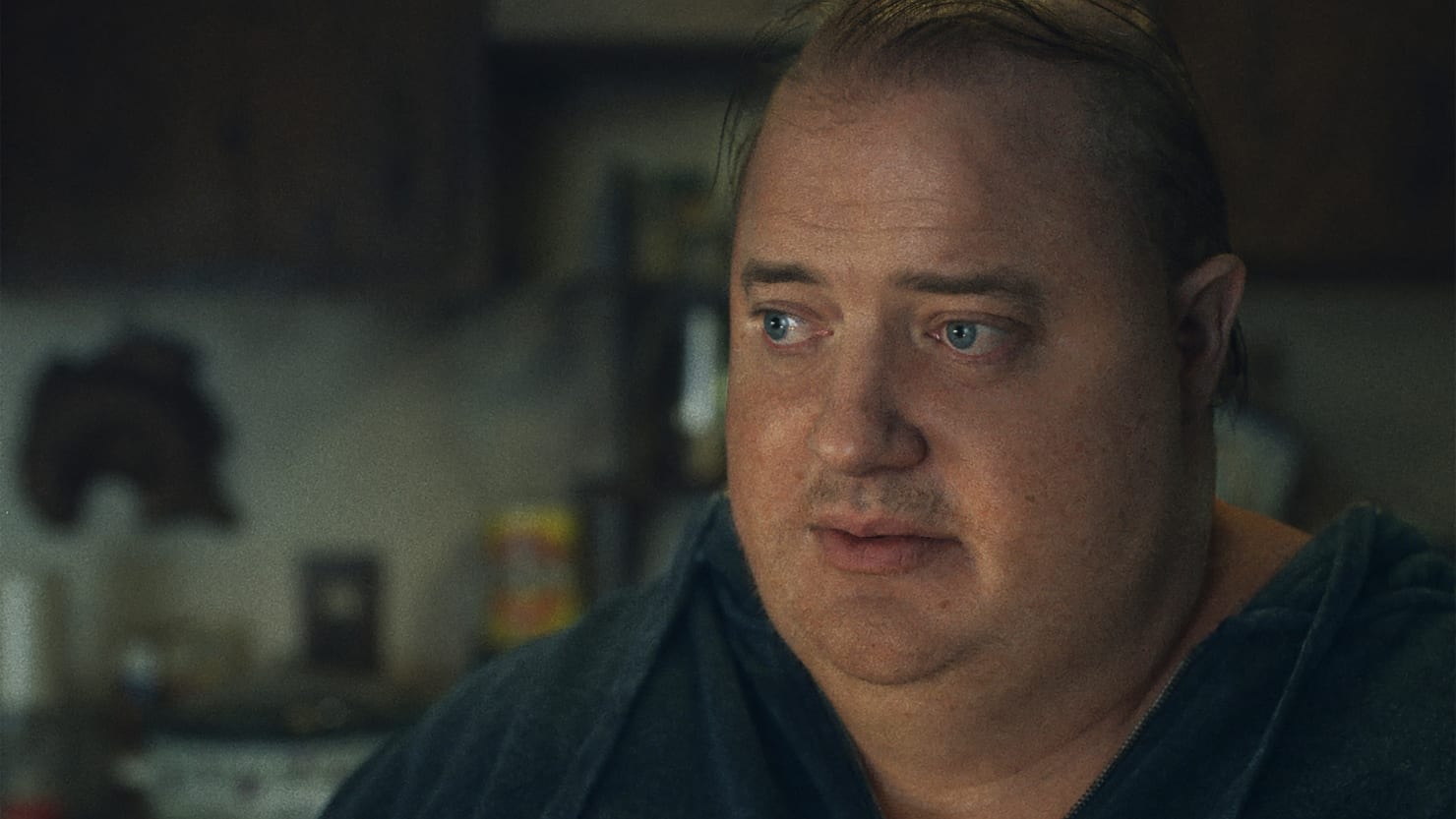 Several times throughout The Whale, star Brendan Fraser repeats the same credo. “People are amazing,” his character, Charlie, says in various iterations, sometimes through tears and sometimes with a remarkably cheerful disposition. We’re supposed to look on as audiences, wondering just how it is that Charlie—a man who is severely obese and confined to his apartment—is able to maintain this belief, when his own life has shown him the opposite time and time again.

Charlie believes in the good of humankind with such fervency that the film leaves no space for denial. But the thing about Charlie’s philosophy is that people are not amazing. We see this all the time in cinema, cruelty slowly percolating through the frame of even the most well-intentioned of films. Humanity is often wicked, even when it’s not trying to be. And such is the case with The Whale, the first film in five years from director Darren Aronofsky.

Aronofsky is an auteur as acclaimed as he is controversial, and his latest is no different. For a decade, The Whale has been Aronofsky’s passion project. He was moved to adapt the story into a film from its theatrical origins, after he saw its celebrated off-Broadway run in 2012. But 10 years in the digital age is a lifetime in terms of cultural sensitivity. Social mores adapt and change. They’re not the same as when the last curtain fell on Samuel D. Hunter’s play. Even with the film’s screenplay adapted by Hunter, and a blisteringly tender performance by Fraser, The Whale drowns in its own deeply misguided quest for empathy.

The Whale is an insular film. From the moment it begins, we’re locked into Charlie’s point of view. We learn that he teaches an online collegiate English course, but won’t turn on his computer’s camera and reveal what he looks like to his students. He begs his students for authenticity, to show their emotions in their work through constant revision and thoughtfulness when analyzing other people’s perspectives—but he struggles to be truthful with them about who he is. Charlie’s reclusiveness doesn’t end online—he hasn’t left the confines of his small Idaho apartment in years. The farthest he’ll make it is to the porch to retrieve a junk food delivery left outside.

When he’s not teaching, Charlie spends his days like most anyone else. He reads, converses with his best friend, Liz (Hong Chau), and eats. Except he does this with the added physical strain of 600 lbs., which he has slowly gained since he left his wife Mary (Samantha Morton) and daughter Ellie (Sadie Sink) for a now-deceased younger man.

We’re left to ponder that while we watch Charlie have a post-orgasm cardiac episode, during which he hears a knock at his door (which seems to swing open and closed quite a bit for a recluse). Charlie beckons the stranger inside and asks him to pick up a crumpled stack of stapled papers from a table nearby to read it to him. It’s a student’s essay on Moby Dick, which Charlie reads whenever he needs to be comforted by his own ardent faith in the world. If he’s going to die, he’d like to hear this take on Captain Ahab’s search for the fabled creature one last time. The film bets on you realizing that its title is double entendre, and silently chastises you once more for thinking it could be so crude to label its hero with such an offensive term.

Charlie does not die, and instead receives some proselytizing from the missionary (Ty Simpkins) who has arrived at his door. The two men come from completely different schools of thought; Charlie believes in the inherent goodness of humanity, while the missionary, Thomas, thinks our only shot at salvation is an intervention with God. Contrasting Thomas’ scriptural pushing is Liz, who cancels out her own tough love approach to Charlie’s obesity with baffling enabling, handing him a meatball sub after telling him his extremely high blood pressure is identical to the symptoms of congestive heart failure.

It becomes painfully clear every time a new day of the week appears written across the screen that we’re watching the final moments of Charlie’s life tick by, as if to stir the sadness in our gut with an invisible countdown clock. Charlie knows this too, which is why he’s so eager to reconnect with Ellie in the short time he has left. In the eight years since Charlie has seen his daughter, she’s transformed from precocious to downright dreadful. Ellie arrives hurling a barrage of slurs and degradation at Charlie. But Charlie can’t help but see the good in her, just as he does everyone else.

The Whale’s lessons are imparted with the heaviest of hands. Hunter’s script paints the differences between the types of love that we can give each other with broad strokes so that audiences won’t miss them from the back of the auditorium. Charlie, in the last days of his life, sees the chance to help his daughter sway from the self-destructive path he unintentionally helped pave for her. Liz and Thomas, on the other hand, present two different types of affection that, though well-meaning, are actively harmful to the person they’re trying to save.

There’s been much discourse during the film’s festival run this fall about whether or not The Whale transcends its sensitive subject matter. To become Charlie, Fraser has to endure four hours in the makeup chair to get into his prosthetics, which reportedly weighed around 300lbs. Aronofsky’s direction takes glee in the film’s magic-by-makeup approach, lingering on full-body shots of Charlie as if to force the viewer to confront whatever prejudices we may have. “Look at this man. He’s dying. See through all of this to his beautiful heart,” it tells us, all the while exploiting Charlie’s obesity for its own mawkish gain.

Scenes that try to skirt the own victimization of Charlie by revealing the reasons for his confinement end up feeling cruel and inadvertently hateful, hardly helped by everyone in Charlie’s earshot calling him pathetic. Through the course of its runtime, the film drops its balancing act, and becomes the opposite of the sentimentality it seemed it was, at first, trying to evoke. The score swells while Charlie reaches for a pizza and candy bars, and we’re forced to watch him wheeze, sweat, and beg for forgiveness for his mistakes—the foremost of which, the film illustrates, is his obesity. The camerawork from Matthew Libatique, longtime Aronofsky collaborator and the film’s cinematographer, pours over Charlie’s size with offensive voyeurism, treating him like an imposing monster in his own horror film rather than a human being.

The Whale is being heralded as a comeback of sorts for Fraser, who, despite pulling back from the limelight in recent years, has still been active in the industry. Fraser has always been an underrated actor, capable of harnessing tenderness and humor in equal parts, making even the silliest of roles feel plainly lived-in.

Thankfully, Charlie is no different, and Fraser’s thoughtful performance—which the actor consulted with the Obesity Action Coalition to perfect—is the sole factor that contributes to Charlie’s humanity. Opposite Hong Chau, who deftly skates the script’s conspicuous audience pandering in favor of harnessing genuine emotion, Fraser shines brightly enough to briefly clear the seemingly perpetual Idaho rain.

Both Fraser and Chau manage to keep the film from coming undone by its overwrought writing. Its small twists are utterly predictable, and its ending is one last confounding ploy for redemption. At one point, Sink describes a poem by Walt Whitman as overwritten, which felt so glaringly ironic that I had to glance in my periphery to see if anyone else’s shoulders shook with a knowing chuckle.

It’s difficult to shake the feeling that, in the right hands, a story like this might have a shot at genuinely altering people’s perceptions. Narratives like Charlie’s surely have merit, endless reasons to exist. But not when they’re made this haphazardly. There are so many important things that need to be said about fatness, the negative culture surrounding it, and the ways in which trauma is capable of affecting the mind and the body in tandem. But here, everything feels distinctly like the stage play it’s adapted from, trying to force us into feeling extreme emotion. In the great, oceanic abyss of well-intentioned cruelty, The Whale can barely tread water.