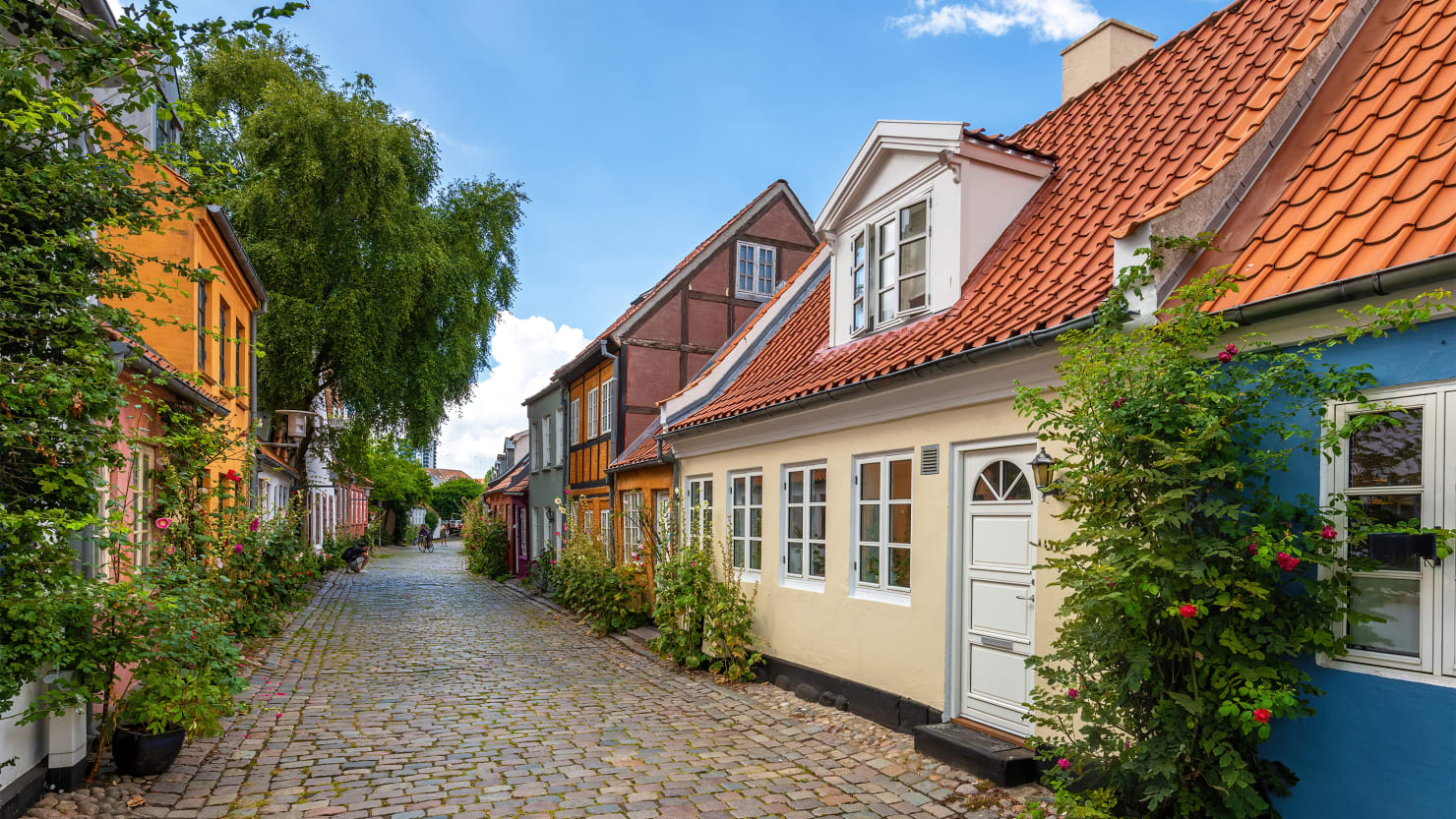 Immediately after exiting the central railway station in Aarhus, visitors are greeted by a bustling pedestrian-only street with quaint red-brick facades, a towering Gothic revival church, mountains of bicycles parked in an organized chaos—all of it very Danish.

But as cliché as it sounds, there are also the smells. Cardamom and cinnamon from a small bakery, fresh-baked bread at a sandwich stall, newly fried churros from a hole-in-the-wall, spit-roasted meats from a shawarma shop with a line out the door.

It was certainly the first thing I noticed. That might be because I came here (with assistance from VisitDenmark and its local partners) to investigate my European friend’s claim that Aarhus, Denmark’s second largest city, is an underrated and under-discussed food town.

But what I discovered over several days is that it’s much more than that. Aarhus is actually, as the Danes might say, skidegodt, or, cool as shit.

Located 120 miles west of Copenhagen—three-and-a-half hours by train or car—on the eastern coast of Jutland, Denmark’s peninsular mainland jutting up from continental Europe, Aarhus has long been a cultural hub thanks to its namesake university, the largest in Scandinavia.

But the former Viking settlement has transcended mere college-town status in recent decades, making culture its core mission. Five years ago, Aarhus was named a European Capital of Culture, a status commemorated in countless sidewalk tiles around town reading “AARHUS 2017.” The city’s supercharged annual festival reflects, in its own words, “a deep political belief that art, culture and community are essential for a flourishing city.”

And it’s been a success.

On the culinary front, Aarhus has quietly developed a formidable scene. For a small city of 350,000, it has a surprising number of restaurants featured in the Michelin Guide—whether it be with coveted stars, Bib Gourmand awards, or high praise in the annual report.

The food culture is centered around the hallmarks that made its big sister Copenhagen a world-class food destination: Innovation, playfulness, sustainability, and yes, of course, hygge, the Danish emphasis on simple comforts. And they actually mean it. None of this is convenient T-shirt sloganeering.

One spot, Hærværk, easily became one of the best meals I’ve ever had—and that’s not the jet lag and copious glasses of wine talking. Opened in 2014 by a group of friends, Hærværk is committed at every level to transparency and sustainable practices, down to its choices in furniture, cleaning products, and banking.

The six-course menu changes weekly or even daily—all depending on what materials they’ve got in stock. All meats displayed in their dry-aging fridge are bought whole: Game from hunters in wildlife management; fish from sustainable sources; and livestock from farms that don’t raise them solely to end up on your plate.

Every part of the animal is used. And in this particular meal, the Michelin green star awardee’s tasting menu shined with two dishes utilizing a milk cow that had lived a productive life. First, the tongue meat fried into a schnitzel, topped with spring onions and pickles; and then a thinly sliced cut served with squash and a rich red-wine sauce made with other parts of the cow.

Elsewhere in town, there’s no shortage of top-notch meals. In just the cobblestone-laden Latin Quarter, the oldest part of the city, there are well-regarded spots like bottle shop/wine bar Force Majeure, the cozy Langhoff & Juul restaurant, and seafood star Mefisto.

There’s also La Cabra, an always-busy coffee roaster and bakery that originated in town and has since expanded to New York’s East Village. A cup of their coffee and a cardamom sticky bun feel essential before roaming the streets dating back to the 14th century.

Just south of that neighborhood, an old bus garage has been converted into Aarhus Street Food, a maze-like compound of 30 stalls showcasing exactly that: street food fare from around the world.

A Nepalese kitchen sells biryani and spicy chicken dishes from that region; a Thai stall sells all matters of curry and rice; another slings Jerusalem dishes including malawach pancakes topped with hummus and falafel or carved meats. There are Korean and Chinese stalls, a fish-and-chips spot, and an outpost dedicated to the duck—confit on a sandwich, or its fat rendered to cook fries.

In a tiny “organic village” 25 miles outside of town, within the Mols Bjerge National Park, the husband-and-wife team behind Restaurant Moment have created a Michelin green-starred ode to the power of nature and the possibilities of sustainability. And the food is superb.

Visitors can freely walk among Moment’s richly biodiverse gardens and greenhouses with a cocktail in hand, leisurely touring the plants they’re about to consume in a 12-dish tasting menu (paired with wines and house-made juices) that changes based on what has been plucked from the yard that day. The menu is meat-free, though they do not advertise as vegetarian because their priority is a carbon-negative footprint.

Aarhus is also a magnificent city to merely roam and take in the wonders of Danish design—past and present.

There’s Aarhus City Hall and its starkly modernist clock tower, a paean to democracy built in 1941 in spite of a brutal Nazi occupation. Den Gamle By, or, The Old Town, is a sprawling open-air museum of historic Danish homes from the 1860s (and earlier), 1920s, and 1970s, many of which house their own small museums, interactive workshops, bakeries or brewers with historical recipes. Sounds like a grade-school field trip destination but it is actually a deeply compelling, multi-hour stroll through well-preserved history. After that, take a short walk over to Møllestien, an idyllic 19th-century street lined with picturesque, colorful homes featuring gabled roofing and flowers growing along their half-timbered frames.

Along one of Aarhus’ many pedestrian-only strips is the Salling department store—unremarkable as any chain retailer, except for one thing: Its roof is an enormous terrace with multiple cafés and bars, abundant greenery, a knee-buckling glass skyway, and an Escher-like network of stairs doubling as seats leading to cozy niche areas, alternate sightlines, and a greenhouse. On paper, it reads like a destination overrun with tourists, but the Salling rooftop is remarkably low-key and spacious—a great spot to hang out with a beer or coffee in warmer weather.

Just a short bus ride south of the city center is the Moesgaard Museum, a powerful piece of architecture inseparable from its landscape, housing an archaeological museum and ancient burial ruins. Near that is The Infinite Bridge, a ring-shaped work of public interactive art doubling as a wooden bridge to nowhere. Back in the city’s harbor is Dokk1, Scandinavia’s largest public library and an awe-inspiring neo-futuristic building with low energy consumption top of mind.

But the city’s crown jewel of cultural draw is the ARoS Aarhus Art Museum. A Guggenheim-like spiral walkway leads you up multiple floors of world-class art exhibits—each worth consuming at a leisurely pace—culminating on the roof with Your rainbow panorama, a permanent installation from Olafur Elliason, the master of the genre.

It’s rather simple: a circular walkway with glass windows tinted across all colors of the spectrum and hovering above the museum with 360-degree views of Aarhus. The exhibit is a delightful, at-times disorienting sensory experience, toying with your perception of color but also the way you view the cityscape through its lens. And from the outside the rainbow ring acts as a welcoming beacon visible from almost anywhere in town—especially when lit up at night.

Elsewhere in the surrounding Aarhus region, visitors can check out a long list of historic manors and nature walks, including Kalø Slot, the bayside ruins of Danish King Erik VI’s castle from 1313, reached by hiking a mile over a land bridge.

A handful of centuries-old port towns have turned into summer-home-dotted getaways worth driving through, if only to picnic on their long beaches. Further inland is Cold Hand Winery, a quirky fruit wine maker and day-drinking hangout spot with overnight accommodations.

While spending time in the Aarhus region, I found myself at one particularly strange roadside attraction: A copy of Elvis Presley’s Graceland mansion, called Memphis Mansion—for legal reasons. Out front is a full-scale replica of Elvis’ birthplace in Tupelo, because of course. Inside the mansion is a basement-level museum displaying the Elvis fanboy owner’s enormous collection of memorabilia (some of it only very loosely connected to The King), along with a giant souvenir shop and, uh, a 1950s-style American diner slinging malt-shop standard plates.

Stumbling on a bizarre roadside attraction like this was a surprise, as it’s something I’d more expect to see in Florida or podunk U.S.A. Then again, everything about Aarhus and its surrounding region was a surprise.