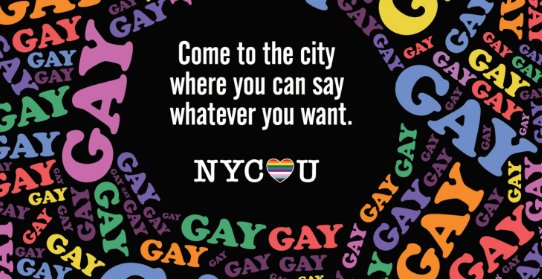 New York City, where the Stonewall Inn riots ignited what many consider to be the birth of the modern LGBTQ+ rights movement, has long voiced its support for that community. Now it wants its message heard in one place, especially: Florida.

Mayor Eric Adams is planning to wallpaper the Sunshine State, or at least parts of it, with billboards espousing New York City’s vociferous opposition to the so-called “Don’t Say Gay” bill that Florida Gov. Ron DeSantis signed into law, he said Monday.

The billboards, which will be organized and erected in partnership with WPP, Adams said from City Hall, will be up for eight weeks in five major Florida markets, including Fort Lauderdale, Jacksonville, Orlando, Tampa and West Palm Beach.

“This is the city of Stonewall. This is the city where we are proud to talk about how you can live in a comfortable setting and not be harassed, not be abused — not only as adults but also as young people,” Adams said, adding all voices are respected.

The mayor displayed some billboard samples as he made the announcement.

“People say a lot of ridiculous things in New York. ‘Don’t Say Gay’ isn’t one of them,” one reads. Another says, “When other states show their true colors. We show ours.”

The message is simple — and directed at Florida’s LGBTQ community, Adams said: “Listen, hey, we want you in New York.” Come here where you can be you.

The Democrat forcefully denounced the Florida law, calling it “political showmanship” and accusing DeSantis’ administration and GOP supporters of “attempting to demonize a particular group or community.

Adams called that “unacceptable” and said the city plans to loudly voice its support in the other direction. He acknowledged everyone’s right to self-identification, saying that at some times, it can be a literal matter of life and death.

“Other people like to hide their color,” Adams said. “We like to show our color and that’s the rainbow that’s representative of this community.”

The GOP legislation, which has drawn intense national scrutiny, bars instruction on sexual orientation and gender identity in kindergarten through the third grade. Republicans say parents should broach these subjects with children. Critics argue that the true intent of the law is to marginalize LGBTQ people and their families.

The law has catapulted Florida and DeSantis, a potential 2024 Republican presidential candidate, to the forefront of the country’s culture wars. Advocates have already filed suit in the state over it and more challenges are likely.

The lawsuit claims the legislation deliberately uses broad terms and invites arbitrary and discriminatory enforcement, empowering parents to be roving censors who can sue school boards for damages based on any perceived violation.

Specifically, it states: “Classroom instruction by school personnel or third parties on sexual orientation or gender identity may not occur in kindergarten through grade 3 or in a manner that is not age-appropriate or developmentally appropriate for students in accordance with state standards.” Parents would be able to sue districts over violations.

U.S. Education Secretary Miguel Cardona met with LGBTQ students and their family members at a school in Orlando on Thursday, discussing privately how the legislation is affecting their lives. Cardona’s visit was one of several Biden administration events Thursday showing support for the queer community, including a presidential proclamation recognizing Transgender Day of Visibility.

“We know while many transgender students experience valuable support at school, many others face significant challenges because of hostility directed at them by others,” Cardona said. “This includes a growing number of state laws that bully and intimidate LGBTQI+ students and their families.”

DeSantis and other Republicans have repeatedly described the rules as reasonable, saying children should learn about sexual orientation and gender identity from their parents, not in schools.

“We will make sure that parents can send their kids to school to get an education, not an indoctrination,” the governor said when he signed it into law last week.

Many critics have said the law’s language, particularly the phrases “classroom instruction” and “age-appropriate,” could be interpreted so broadly that discussion in any grade could trigger lawsuits, creating a classroom atmosphere where teachers would avoid the subjects entirely, which is how the bill earned its moniker.