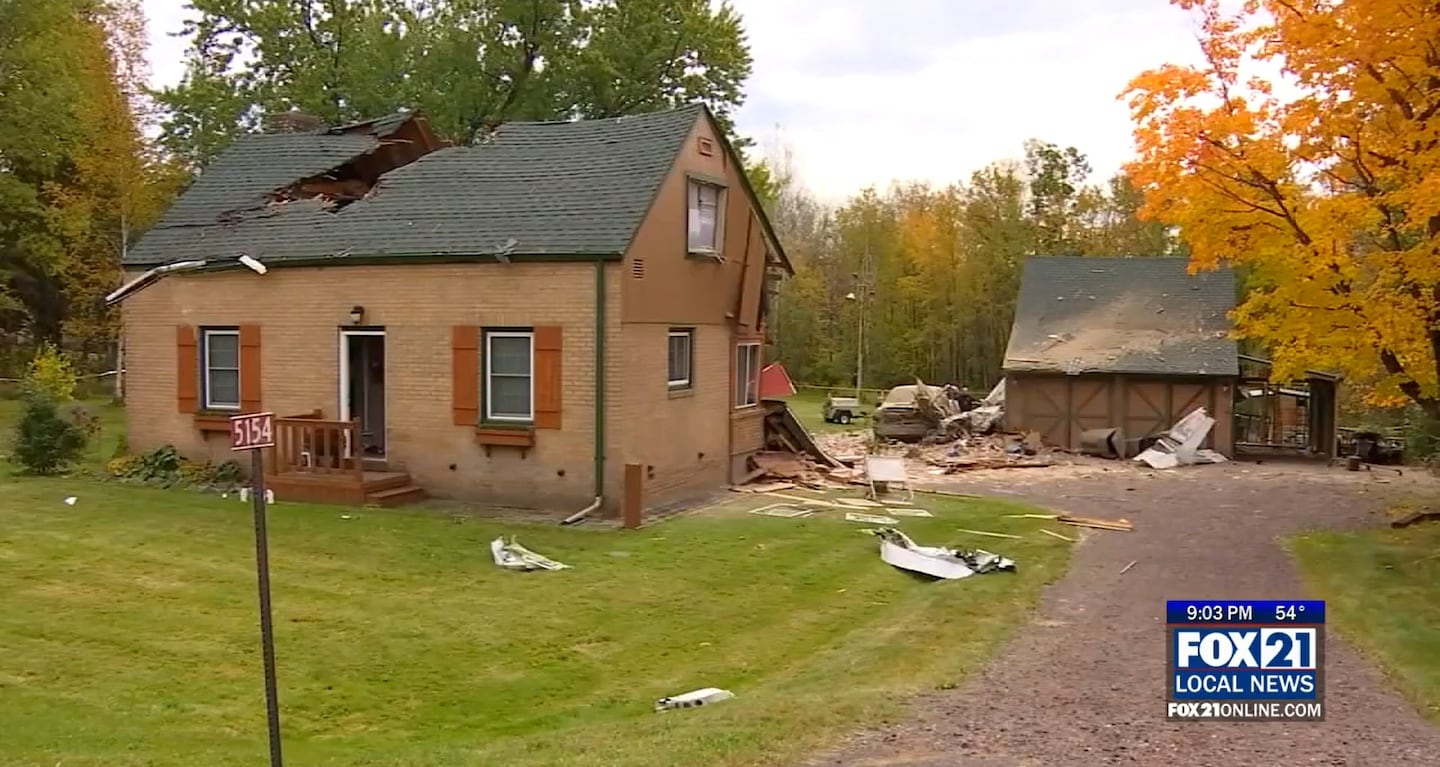 Just before midnight on Saturday, Jason Hoffman and his wife, Crystal, woke up to the sound of a thunderous boom. Shaken and thinking a furnace had exploded, Hoffman turned to his bedside table to grab a flashlight. It illuminated an “unimaginable sight,” he said: Most of the bedroom had been reduced to a pile of rubble, and a small airplane poked through the roof.

As a cloud of dust formed inside the house in Hermantown, Minn., Hoffman’s shock turned into heartache. The three people aboard the Cessna 172 aircraft were killed in the late-night crash. The victims were identified by police as Alyssa Schmidt, 32, her brother Matthew, 31, and Tyler Fretland, 32. The three were from the Minneapolis-Saint Paul area.

Fretland, a certified flight instructor, was flying the plane. The cause of the crash is under investigation.

“The biggest heartbreak about all of this isn’t losing a home, but that three people — all of them young — died,” Hoffman told The Washington Post. “It’s absolutely heartbreaking.”

A soccer player was spooked before fatal plane crash. So was his pilot.

Fretland’s mother told KSTP that her son was trying to acquire his commercial license. He and the Schmidt siblings were traveling back from a wedding in Duluth, a port city in northern Minnesota, she said.

But soon after they had taken off, a control tower warned police that the plane had disappeared from the radar about one mile south of Duluth International Airport, a spokesperson for the city of Hermantown said in a news release. Officers scouted the area until they found the wreckage at Hoffman’s house — where the couple, now jolted awake, was trying to escape from the debris.

“We were choking on all of the dust and at the same time trying to get some clothes and find our cat through all the rubble,” Hoffman said.

Zuzu, the cat, was unscathed. So were Crystal and Hoffman, though he had a couple of scratches on his calf. “We were extremely lucky,” he said. “I realized that if the plane had fallen an extra 16 to 18 inches down, it would have hit our bed.”

In the hours after the crash, Hoffman’s neighbors rallied to help the couple. That kindness even extends to strangers, Hoffman said.

“Two days ago we lost our home, and we’re now on our way to a rental house a local business owner offered to furnish for us and let us stay in,” he said. “You don’t realize how much impact an act of kindness has until you’re in a situation where you really need it.”

Though “the generosity has been unreal,” there’s still a sense of loss. The two-story brick house had been a “fairy tale kind of thing,” Hoffman said. For six years, cherished memories and strong friendships had been forged in that Hermantown neighborhood. But now, they can’t imagine moving back in, Hoffman said.

“I don’t think we’ll ever rebuild the house because of what happened,” he said. “Three people lost their lives there and, even though we didn’t know them, it’s just too heartbreaking.”

The pain of their deaths is also being felt 150 miles south in Burnsville, a suburb outside Minneapolis, where the Schmidt siblings were known as a close-knit duo.

Rachelle Peterson, one of Alyssa’s friends and former classmates, said Alyssa was a kind and selfless person who made her feel at home when Peterson first started as a student at Valley Middle School in Apple Valley, Minn. Decades later, their trips to the state fair and country concerts remain “an experience that I will take away for a lifetime.”

And Peterson said Matthew was equally as kind as his older sister.

“He had the best smile and always gave the best hugs,” she said. “He was quiet and sweet, but his demeanor carried light and love to more than we will ever know.”

The siblings had a close bond that remained strong through high school and college, she added.

“Alyssa and Matt were closer siblings than most,” Peterson said. “Where there was one of them, many times there were both. It was no random moment that they were together when this tragedy happened.”

Daniel Radcliffe Once Shared He Sometimes Felt Useless as a Boyfriend