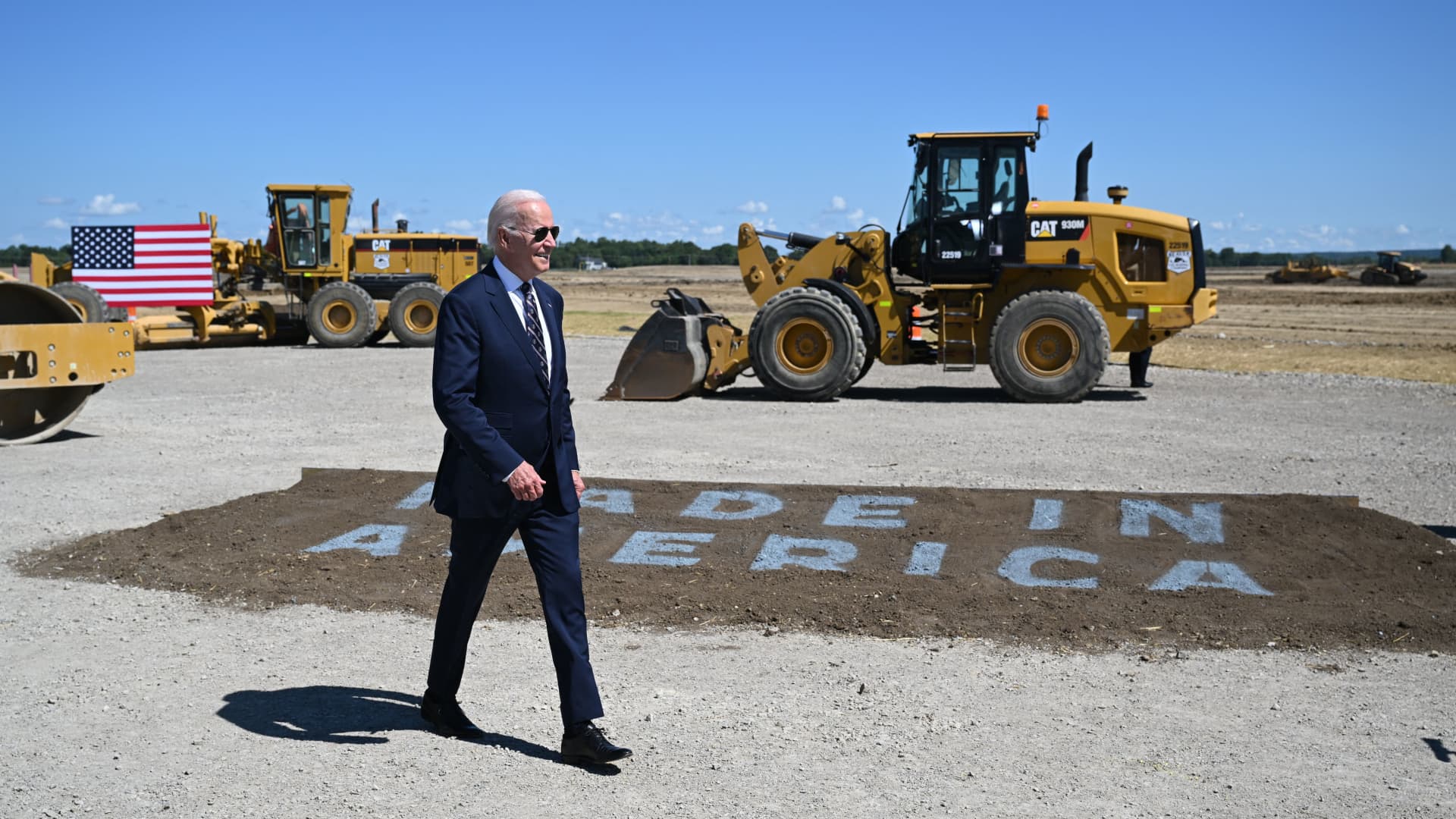 US President Joe Biden arrives to speak on rebuilding US manufacturing through the CHIPS and Science Act at the groundbreaking of the new Intel semiconductor manufacturing facility near New Albany, Ohio, on September 9, 2022.

President Joe Biden is joining the founder of Taiwan Semiconductor Manufacturing Co. on Tuesday to announce the opening of a second chip plant in Arizona, raising the company’s investment in the state from $12 billion to $40 billion.

The company will also announce it will be producing more technically advanced chips than originally proposed. The investment by TSMC is one of the largest foreign investments in U.S. history, and the largest in the state of Arizona.

Semiconductor chips are used in everything from computers and smartphones to cars, microwaves and health care devices. The Covid-19 pandemic shined a bright light on U.S. dependence on Chinese manufacturers as lockdowns led to a global shortage of the high-tech chips.

Biden signed the CHIPS and Science Act into law in early August, allocating billions to lure manufacturers to produce the widely used chips domestically. The law includes $52.7 billion in loans, grants and other incentives as well as billions more in tax credits to encourage investment in U.S. semiconductor manufacturing.

Once the TSMC plants open, they will produce enough chips to meet the U.S. annual demand, 600,000 wafers per year, according to Ronnie Chatterji, National Economic Council acting deputy director for Industrial Policy who oversees CHIPS implementation.

“It’s the foundation of our personal electronics, and also the future of quantum computing and AI,” Chatterji said. “At scale, these two [factories] could meet the entire U.S. demand for U.S. chips when they’re completed. That’s the definition of supply chain resilience. We won’t have to rely on anyone else to make the chips we need.”

“The passage of the CHIPS and Science Act was absolutely critical in providing the long term certainty for companies like TSMC to expand their footprint and expand their commitment to the United States,” said Brian Deese, National Economic Council director.

The goal of the legislation was to spur private investment in chip manufacturing. CEOs from companies who will benefit from U.S. chip production, like Apple CEO Tim Cook, Micron CEO Sanjay Mehrotra and NVIDIA CEO Jensen Huang, will also be in attendance.

“Whether it’s in electric vehicles or consumer electronics, CEOs of major companies are making decisions about their plans 18 to 24 months forward,” Deese said. “The build out in the United States gives them more confidence to operate as well.”

Biden is visiting the first plant in Phoenix which is expected to begin producing chips by 2024. It was initially slated to produce 5 nanometer chips, but now will create 4 nanometer chips. The second plant will open in 2026 and produce 3 nanometer chips, the most cutting-edge chips currently available.

The opening of the plants will further help boost Arizona’s economy which was hard hit by the pandemic. Phoenix had an unemployment rate of 6.5% in 2020 when over 9,000 of the city’s residents filed for bankruptcy. Phoenix’s unemployment rate has since dropped to 3.2%. The state’s economy grew by 6.3% in 2021, the most in 16 years.