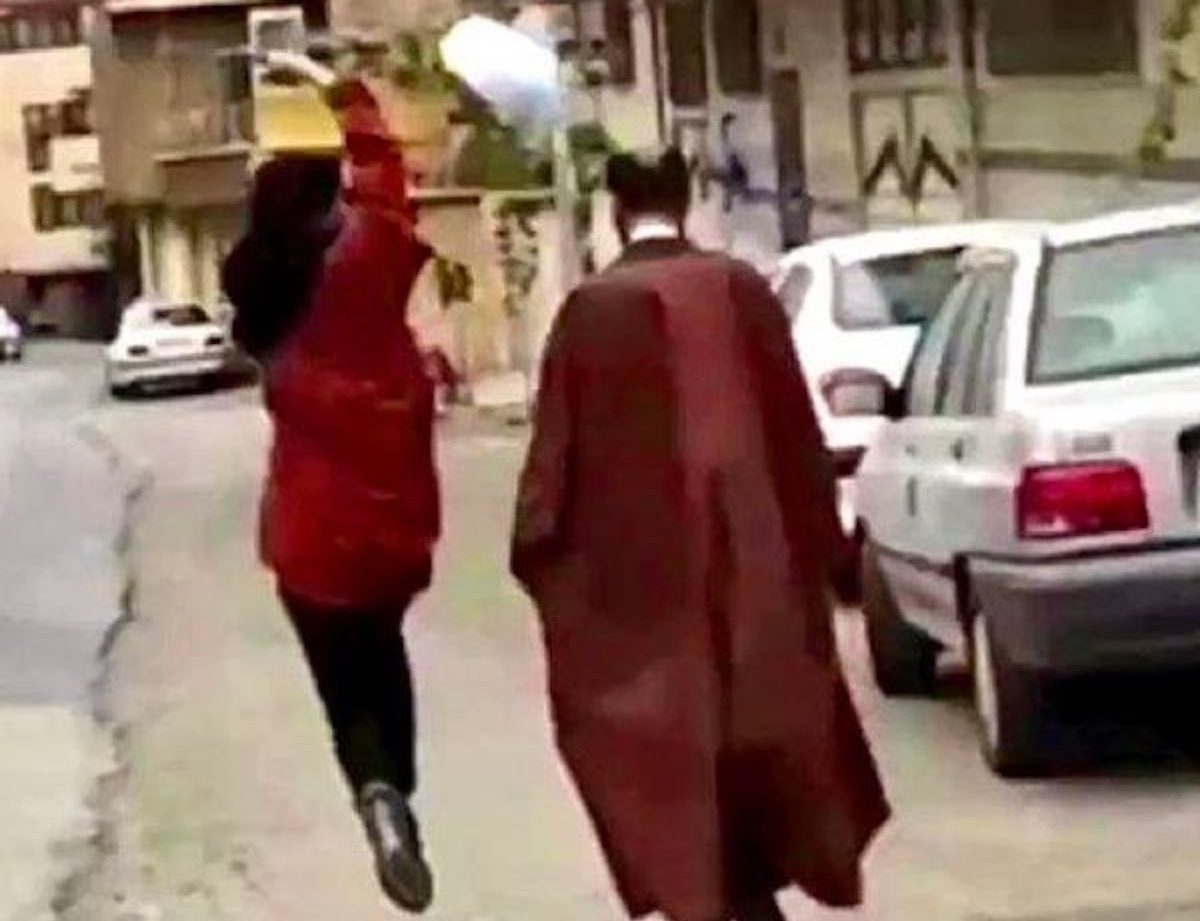 The ongoing protests in Iran over the death of 22-year-old Mahsa Amini while in the custody of the country’s “Guidance Patrol” (or morality police) have made world headlines. But there is another form of protest that has received less mainstream attention in Western media.

Whereas Amini was arrested for allegedly wearing her hijab “improperly,” thereby violating Iran’s mandatory hijab law, this new protest campaign involves another form of headwear – the amameh, or turban, worn by Shi’a clergy. Protesters have been deliberately knocking amameh off the heads of passing clerics.

The movement, known as amameh parani, has spread across Iran since early November. It has become particularly popular with young Iranians. Videos posted on twitter under #TurbanTossing and عمامه_پرانی# show amameh being knocked off in streets, cars, buses, metro stations and almost everywhere clergy appear in public.

In less than a month, amameh parani has become the symbol of a national satirical mockery of Shi’a clergy and their legitimacy in Iran, and another face of the global protests against the death of Mahsa Amini.

By focusing on the significance, symbolism and function of the amameh, the campaign explicitly targets the hegemony of Shi’a clergy over Iranian politics and society.

Clerical attire is composed of three pieces: the amameh, a turban made of 11 meters of thin white or black cotton material; a long cotton garment called a qabā; and the abā, the long open robe worn over it.

A students at a Shi’a seminary is ceremonially crowned with an amameh upon completing the first stage of his theological studies, which typically take three to five years.

Iranian clergy and their institutions view the amameh as sacred. They even use its colors to signify the lineage of a cleric, creating a class-based system both within and outside the clerical institutions. In its contemporary usage, for instance, a black amameh signifies a cleric’s claim of direct lineage to the prophet.

Because of this, the amameh is the source of religious legitimacy and implies a sense of infallibility inherent in Shi’a theology. The Islamic Republic has translated this theological model systematically into politics.

The amameh is the only source of political authority in the Islamic Republic. The clergy occupy all positions of power and authority. They have established and protected an exclusive political and economic system.

Iran’s parliament, government, judiciary, military, economy and education system are directly ruled either by individual clerics or by clerical assemblies. Candidates in Iran’s elections must be approved by the Guardian Council. The council also warrants all laws passed by the parliament in accordance with Shi’a Shari’a law.

The amameh is no longer a mere sign of religious learning or social status. Rather, it is the symbol of a hegemonic political power. Like defrocking in Christian churches, removing an amameh is synonymous with the removal of its associated rights, authority and prestige.

Prior to the Mahsa Amini protests, amameh parani was typically a deliberate cross-party attack at a perceived political opponent. It was typically performed by zealous followers of the conservatives, based on an edict from one of Ruhollah Khomeini’s revolutionary sermons in 1969 to toss the turbans of clergy deemed corrupt.

The current amameh parani campaign employs the same tactic for a different end. Dislodging an amameh in public is a sign of great irreverence and ridicule. It attacks what the attire represents: the Islamic Republic regime.

Hand in hand with slogans such as “Clerics get lost!” it’s a form of resistance against discrimination and exclusion, and represents the rejection of clericalism. It is a symbolic act against the entanglement of religion and politics in Iran.

The campaign is also about gender politics and the violent and discriminatory way clothing is used against women. It is common for clergy to verbally abuse women and girls in public for their “inappropriate” hijab. The death of Mahsa Amini highlighted the kind of gender-based abuse Iranian women have been subject to for more than four decades.

From Iranian clergy in parliament saying that tossing the amameh is “playing with the lion’s tail,” to Iraqi Shi’a Sadrist leader Muqtada al-Sadr warning against the spread of amameh parani across the border, it’s clear the symbolic meaning of the act is being felt.

The reaction to protest in general has been typically harsh and violent, including calls for the execution of protesters. Courts have already imposed the death sentence on some. These threats can extend to those who live outside Iran, including the co-author of this article, who has decided to remain anonymous.

Had any influential cleric opposed the killing of Mahsa Amini or other peaceful protesters, campaigns like amameh parani might not have taken off. But the regime’s demand for more brutality and violence has only further angered the public.

The Iranian clergy face a crisis of legitimacy beyond politics. Their challenge is no longer about maintaining hegemony over the country, but whether they will retain the legitimacy to perform their traditional religious roles.

Negar Partow is a senior lecturer in security studies at Massey University. This article is republished from The Conversation under a Creative Commons license. Read the original article.