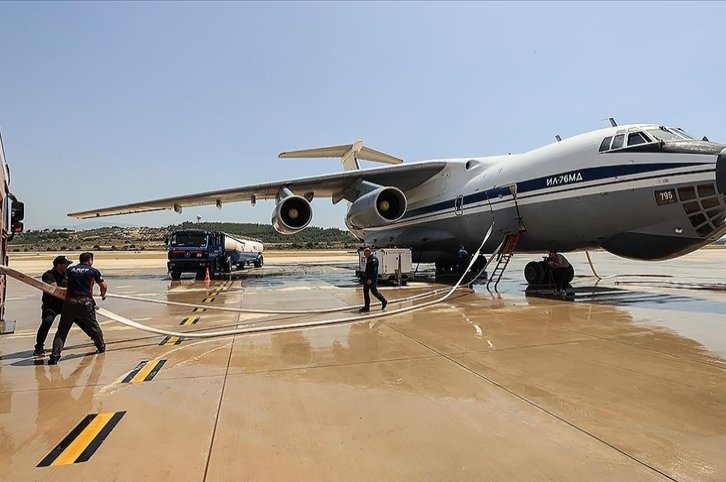 Agriculture and Forestry Minister Vahit Kirişçi said on Thursday that Turkey would “proceed with” negotiations with Russia to obtain firefighting planes to fight wildfires. Kirişçi stated that the issue would likely be brought up during President Recep Tayyip Erdoğan’s visit to Sochi on Friday for talks with Russian leader Vladimir Putin. “We hope to bring the talks to a certain levels,” he said.

Wildfires, aggravated by the fallout from climate change, threaten Turkey’s evergreen land. The country saw 226,845 hectares of forests damaged or completely burned between 2012 and 2021, with more than 61% of this loss taking place in 2021 alone.

Data from the Directorate General of Forestry (OGM) shows a total of 27,150 forest fires took place across the country in the past decade. Fires, though not uncommon, appear to have increased in intensity, something blamed on strong winds spreading them and searing temperatures further aggravating the flames. Though last year may seem the worst in terms of the size of the forests that succumbed to the blazes, the highest number of fires took place in 2013, at 3,755, one year before the country recorded its least fires in a decade at 2,149.

Last year, 2,793 forest fires were reported. Most of them, as was the case in the past, took place during the summer season.

The minister told Anadolu Agency (AA) on Thursday that they increased the number of firefighting planes from three to 20 last year. “If you are not an island country, intervention to fight fires via land matters most and aerial support is secondary. Still, we expanded our fleet. We also have 55 helicopters now (11 more than last year), including 10 helicopters that can exclusively respond to fires at night. We also employ unmanned aerial vehicles and we have eight,” he said, noting that they also had some 21,000 personnel responding to fires.

Kirişçi noted that around 1,100 fires broke out in the first seven months of 2022, but people were not aware of all of them except a few. “Fifty-five percent of our forests are very inflammable. If your country is in the Mediterranean basin, this means you have temperatures, low humidity and strong winds that make the fires inevitable. We have thousands of personnel and as a nation, we have to remain vigilant,” he said, noting a ban on access to forests by governorates. He said last year’s forest fires in southern Turkey were the second biggest in the history of the Republic of Turkey and burned nearly 140,000 hectares of land. He added they completed replenishment work in 108,000 hectares of affected areas and plan to finish reforestation efforts by the end of this year.