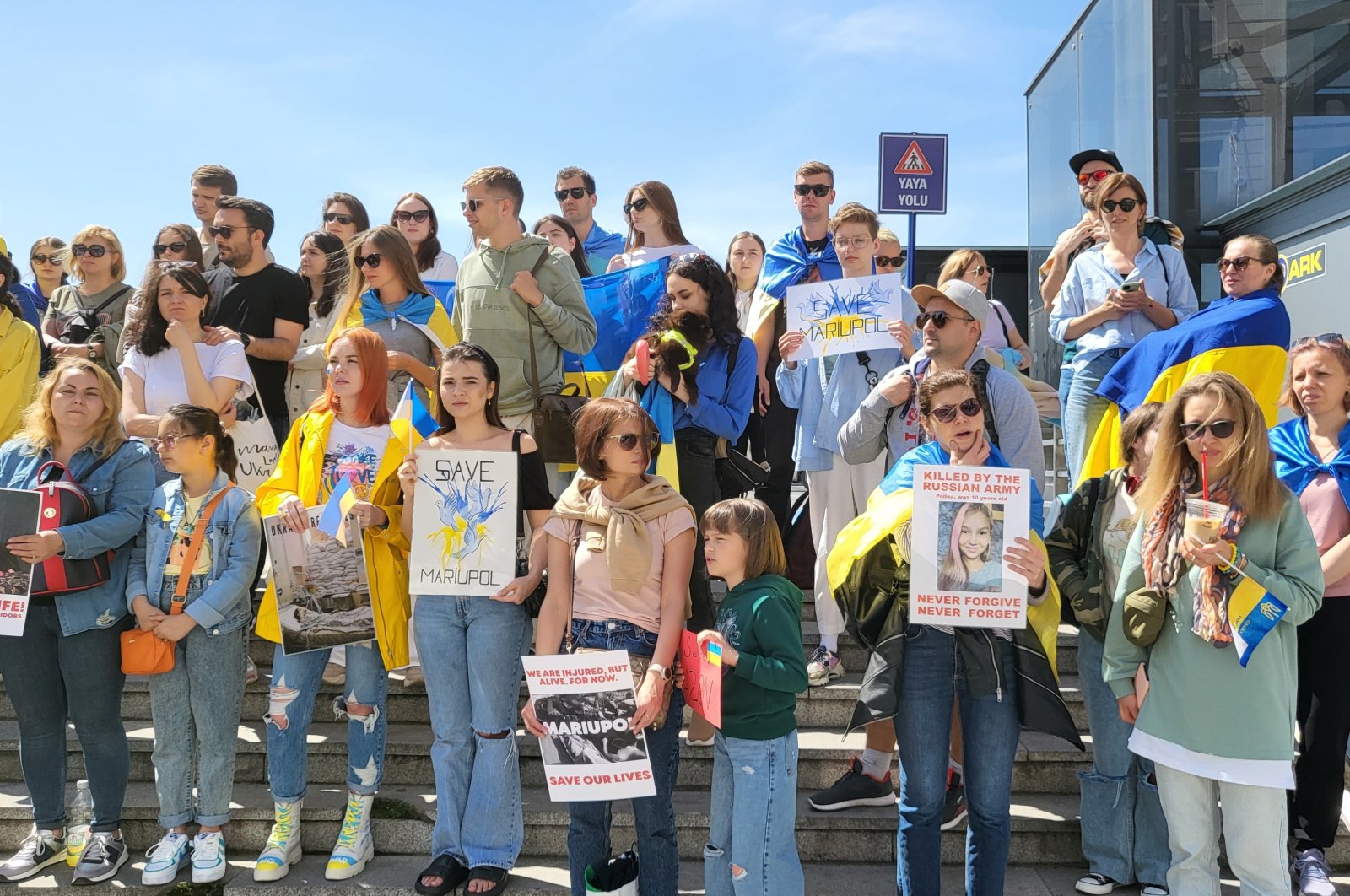 “I was sure I would find peace here, in Turkey,” Valeria Linnik tells Daily Sabah in an interview from her close friend’s Istanbul apartment, a far cry from the shelled residential buildings of her hometown.

Linnik, 28, fled the Russian-occupied country, leaving her home in Mykolaiv on March 28, almost a month after the invasion. The young woman first fled to Chisinau, the capital of neighboring Moldova, before coming to Istanbul after her friend reached out.

“Turkey is very welcoming. It’s not my first time here, I love this country,” Linnik said, adding that it is not easy to overcome the feelings of resignation that come with being a refugee.

“All Ukrainians are going through the same situation right now. The doors of all nations and countries are open for you, but you want to return home. This is an indescribable feeling, this is patriotism.”

The number of people forced to flee conflict, violence, human rights violations and persecution has now crossed the staggering milestone of 100 million for the first time on record, propelled by the war in Ukraine and other deadly conflicts, according to the United Nations High Commissioner for Refugees (UNHCR). Not since World War II has such a massive wave of human dislodgement taken place within Europe.

A joint report last week by the Internal Displacement Monitoring Centre (IDMC) and the Norwegian Refugee Council (NRC) said around 38 million new internal displacements were reported in 2021. Some of those were by people forced to flee multiple times during the year.

Noting that she was warmly welcomed in Turkey, Linnik said, “Everyone I meet on the street or in the market helps and supports me when they hear that I am Ukrainian. This leaves a very good impression of Turkey.”

As the Russia-Ukraine war continues, nearly 100,000 Ukrainians have fled to Turkey since the start of the war on Feb. 24, President Recep Tayyip Erdoğan said in early May.

Turkey has been a key transit point for asylum-seekers aiming to cross to Europe to start new lives, especially those fleeing war and persecution. The country already hosts 4 million refugees, more than any other country in the world, and is taking new security measures on its borders to humanely prevent a fresh influx of migrants.

Yet, as the war rages back home, Linnik struggles to find meaning.

“War is the worst thing that can happen in the world,” she says, “For what? Why? These questions are always running through my head.”

Highlighting that the war will never be forgotten, Linnik said, “We lived in a very beautiful country. Until our ‘siblings’ come and take what we have. I don’t mean material things, I’m talking about lives. This is the great pain of our nation.”

“You feel very vulnerable. You know you can’t change anything but you only hope. When the next missile went off near my house, the bombing of my city was a point of no return,” said Linnik, her voice cracking.

“When I heard the first siren, I had a panic attack. I was too scared to control my emotions,” said Linnik, adding that she was only able to last for a month in war conditions.

“We thought this must have been someone’s bad joke.”

‘Never know where next missile to go’

During the first week of the Russian invasion, Linnik said they hardly slept and didn’t eat. “Our time was spent just waiting and following the news. Then we started to get used to it, gradually going out to go to the market when there was no siren,” she explained.

“You never know where the next missile will go,” she said, adding that the residents of the city covered their windows with tape to prevent them from shattering from the force of passing missiles.

Recalling that the only sounds coming from outside were gunshots, Linnik said, “Imagine, you live in a comfortable city and commute to work every day. Now your life has come to a standstill.”

“But what I’ve been through is nothing compared to what happened in Mariupol, Bucha and Irpin,” she added.

The discovery of dozens of bodies in April, some with their hands bound, in a number of towns near the Ukrainian capital Kyiv after Russian troops retreated from the territories had sparked international outrage. Ukraine had accused Russia of carrying out the killings in towns near Kyiv, including in Bucha, Irpin and Hostomel, with President Volodymyr Zelenskyy branding Russian forces as “murderers, torturers and rapists” who were committing “genocide” in his country.

Zelenskyy called the killings evidence of genocide, but Russia rejected the accusation. It said photos and videos of dead bodies had been “stage managed by the Kyiv regime for the Western media.”