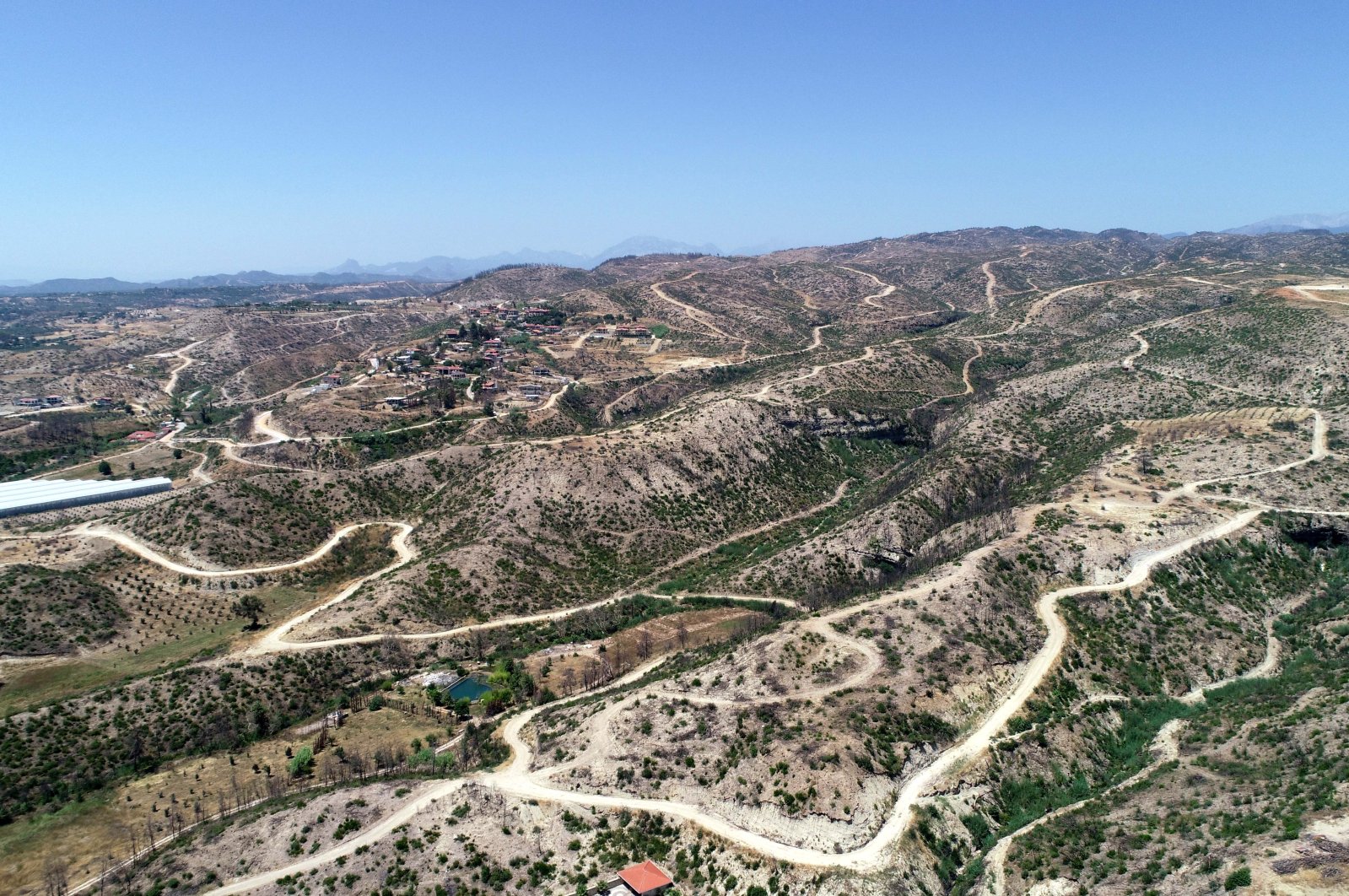 Thursday marked the first anniversary of the worst forest fire the southern Turkish province of Antalya has ever seen. The town of Manavgat was at the epicenter of the blaze that was extinguished in 10 days. One year on, some 60,000 hectares (around 148,200 acres) of land once reduced to ashes is greener again while houses burned down in the fire are rebuilt.

After the scorched lands cooled off and debris was cleared, the recovery process started in Manavgat, which suffered the most among towns hit by the wildfires, including Akseki, Gündoğmuş, İbradı and Alanya.

The fire claimed six lives, countless animals were lost and more than 1,000 structures, from barns to small village houses, were destroyed. The Housing Development Administration of Turkey (TOKİ) launched rebuilding work in the area in the local architectural style, featuring terraces and barns, with long-term loans for repayment. The authority plans to complete more than 600 new houses later this year.

Elsewhere, crews from the Directorate of Forestry in Antalya struggle to bring back the greenery in devastated areas. They have covered almost 90% of the burned land in their work so far, though the process is slow, with seeds and saplings still needing time to grow.

Vedat Dikici, head of the directorate, told Anadolu Agency (AA) on Thursday that they were nearing the completion of recovery work in burned areas, explaining that they planted seeds across 30,000 hectares of land while red pine acorns are able to grow by themselves and high precipitation in the winter helped manually planted seeds. Across an area of about 14,000 hectares, crews plowed and planted more than 1.6 million saplings. Another 16,000 hectares of land in more remote, inaccessible areas is expected to restore itself. “The work took shorter than expected. We have needed a big workforce but we are now near completion. We are now waiting for the autumn to plant new saplings as the summer is not a suitable time for this work,” Dikici said, as he showed saplings had grown to 10 centimeters (3.9 inches) in burned areas. “Within four or five years, you will see these places green once again,” he added.

Dikici said that they planted saplings of carob, laurel and silverberry in burned areas near residential zones, noting that these plants are all more resistant to fires and can bring extra revenue for villagers. He also denied the allegations that burned areas were opened for development. “Anyone can visit the burned areas and see for themselves. Let alone construction of hotels, there is not a single structure here. Houses are built but none of them are inside the burned areas. They are either in the lands owned by villagers or in areas outside the forests,” he said.

Mustafa Cansız, mukhtar for Kalemler, a rural neighborhood where 57 houses were burned in the 2021 wildfire, said they expect the reconstruction to be completed within two months. “The state did everything for the village,” he said from the village that was engulfed with flames in about 45 minutes during last year’s blaze.

Urkuya Özen, who lost her home in Kalemler, said the state and philanthropists reached out to them after the fire. “They built a new home for us. We had fig, apple and orange trees. They were all burned. We planted new ones,” Özen said. “I have never seen such a disaster in my life. In half an hour, the whole village was under fire. (Crews) evacuated all the elderly, otherwise, we would die,” 63-year-old Özen said.

Şükrü Okudan, another villager, said he lost everything he had during the fire but they received new homes in a year. “They are even better than our old homes,” he said.

Turkey suffered from hundreds of forest fires last year, the most devastating in recent memory, particularly affecting the Mediterranean region. This year’s biggest fire so far was in Marmaris, a town in the western Mediterranean region of the country. Last month’s fire lasted for days due to strong winds and humidity in the area before firefighters, planes and helicopters extinguished the blaze that forced evacuations and affected more than 3,000 hectares of land.

The country saw 226,845 hectares of forests damaged or completely burned between 2012 and 2021, with more than 61% of this loss taking place in 2021 alone. Data from the Directorate General of Forestry (OGM) shows a total of 27,150 forest fires took place across the country in the past decade. Though last year may seem the worst in terms of the size of the forests that succumbed to the blazes, the highest number of fires took place in 2013, at 3,755, one year before the country recorded its least fires in a decade at 2,149.

Last year, 2,793 forest fires were reported. Most of them, as was the case in the past, took place during the summer season. The majority of the huge fires were in Antalya and Muğla, two southern provinces on the shores of the Mediterranean Sea. The deadly blazes claimed the lives of at least eight people. The wildfires prompted a nationwide mobilization effort to help the burned down villages and triggered a debate on the country’s response to massive fires. The forest fires that erupted in more than 500 locations in two provinces lasted for days, the longest for 15 days, causing the evacuation of villages in Manavgat, the worst-hit district in Antalya, as well as evacuations from Bodrum and Marmaris, two popular vacation destinations in the neighboring Muğla province.

As the summer approached, Turkey readied for another potential season of wildfires. This year 55 helicopters and 20 airplanes have been reserved for dumping water on burning forests, while some 15,000 volunteers are ready to be in the field, along with the professional staff.