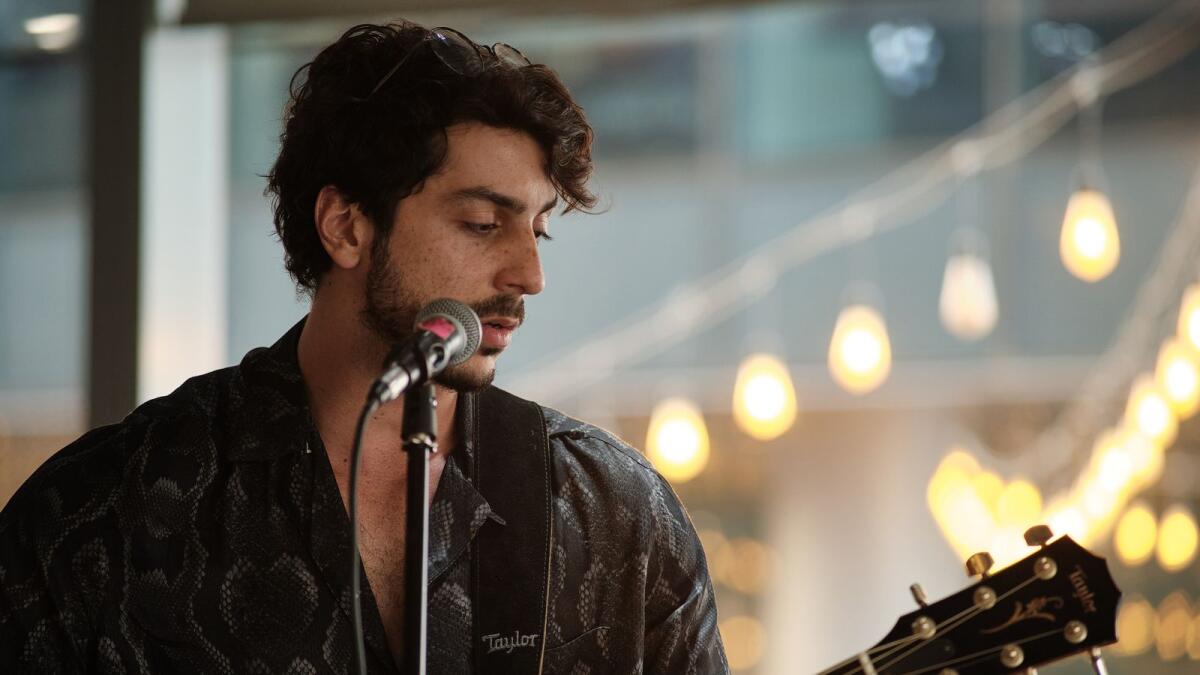 Dubai-based music artist belts out an appropriate tune for a world filled with uncertainty.

In a world marred by chaos and disenchantment, aren’t we all looking for a little bit of grounding and direction?

It is these emotions that award-winning Lebanese-Canadian artist Danny Aridi channels through his latest track, Northern Star.

“Darling you’re safe here, in my atmosphere,” the singer-songwriter belts out in his soulful voice, and as the passion-filled track builds up in intensity, one can understand why Danny is one of the most sought-after musical acts in the UAE.

He’s performed for international artists like Calvin Harris, Pink, and Katy Perry and has been consistently doing local gigs in the UAE for the past decade, making a mark with his original music. Tracks like Solo (2018) and When We’re Together (2021), among others released through Universal Music MENA, have struck a chord with listeners – and his engaging music videos – often locally shot – add to their appeal.

Northern Star is described by Dubai-based Danny as “a very passionate song that builds up in intensity during the chorus while bringing listeners back to its calm and reassuring messages in the verses.” Its music video, shot in Poland, features a pair of remarkable aerial performers whose routines mirror the track’s intense emotions.

We caught up with Danny to know more.

Having listened to your latest song Northern Star, we get that it’s about being a kind of reassuring presence for a loved one, a ‘direction’. What are the emotions or life experiences that inspired you to write it?

Whenever our world seems to be filled with uncertainty and we feel a little lost, we can always remember the people around us and the moments when we felt a sense of comfort and reassurance.

What would you want listeners to take away from Northern Star?

The song talks about being a guiding light for someone and leading them on the right path. Just as the North Star was used for guidance for hundreds of years.

The night sky has often inspired many creative artists and dreamers who have made analogies to love and relationships through their interpretation of it. What is it about stars that appeal to you and how do they make you feel?

When our ancestors were lost they often looked up at the sky and used the North Star to navigate their terrain and get back on the right path. I wanted to play on the idea of being someone’s North Star, being their source of light in the darkness and leading them on the right path.

We also loved the music video and the aerial performers are breathtaking. Tell us more about the making of the video and how it complements the song.

Thank you! I came across a very talented couple who are aerial performers and they put together an amazingly choreographed routine where they are dancing in each other’s arms and suspended in the air. It fits perfectly with the song, as there are a lot of space references in the lyrics.

For example, when I say “lift off” we see them lifting off of the ground. My favourite scene is when they are in each other’s arms in the middle of the air while you hear me sing the words “darling you’re safe here in my atmosphere.”

What is it that inspires you as an artist, on a daily basis?

As an artist, I have to be empathetic and able to write not just from my perspective, but from the perspective of someone else as well.

What is the soundtrack of your life – who are the artists that have had the most profound impact on you?

Probably that silly tuba track on a loop, haha. To be honest, there are a lot of artists that inspire me and I find myself drawn to songwriters that put a lot of feelings and emotion into their songs.

People like Ray Charles and Amy Winehouse wrote songs and performed them from the heart, and it showed every time they were on stage.

Is there a particular music track that tends to get stuck in your head?

I’m always writing and coming up with new melodies and song ideas, so it changes constantly!

As a local musician who regularly churns out music and performs in the UAE, are you glad that live gigs are back post the pandemic, and can we expect to see you perform again soon?

Yes, I love that live shows are back and I can tell from everyone I’ve spoken to in the audience of my last show that everyone else is excited too! There’s nothing like live entertainment and feeling that connection with the audience so I’m always happy to perform live.

You’re signed with Universal Music MENA. Is the backing of a big label important for an independent artist such as yourself? Creatively, do you feel you have the kind of freedom to create what you want?

Yes, labels have changed and adapted over the years, and now an artist needs to be the full package to succeed. I’m lucky that I have the full freedom to create and a great team at Universal that supports my career.

Lastly, how has the UAE supported your dreams as a musician and how has the music scene expanded and improved since you started out?

I’ve been fortunate enough to perform at some massive festivals and open for international acts such as The Backstreet Boys in Dubai and Bruno Mars in Abu Dhabi.

The music scene is growing every year in the UAE and I feel proud to be a part of it.