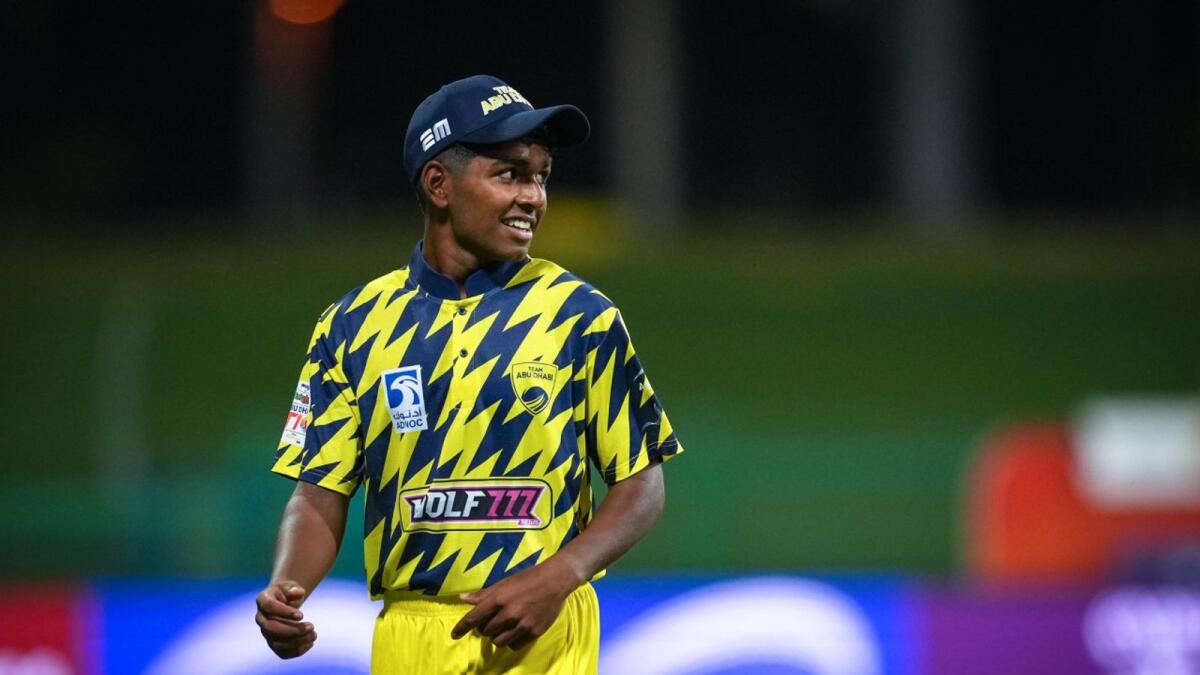 Initially slated to be among the substitutes, D’Souza was a late replacement for UAE international Alishan Sharafu, who rolled his ankle in the warm-up.

That opened the door for D’Souza to make history at Zayed Cricket Stadium, the ground which sits adjacent to the academy where the teenager has played since he was just seven-years-old.

D’Souza has previously sat in the same stadium to watch the Abu Dhabi T10 as a fan but on Wednesday night took centre stage himself.

The Grade 11 pupil at Abu Dhabi Indian School went on to safely held a catch in the deep to remove Sultan Ahmed on a memorable night for the youngster, his family watching in the stands, and everyone associated with Team Abu Dhabi.

It was a great feeling. You never expect opportunities like this but when you get them, you just want to do well,” said D’Souza.

“I saw my friends and family in the ground and it showed me where I was two or three years ago when I came to watch the Abu Dhabi T10 as a fan. I’m so grateful for this opportunity and I want to make the most of it in this tournament. I was nervous for the first two or three overs but when I got used to it, it was the same. Every game, you have to watch the ball and when the catch came I just told myself to do what I do.”

“I thought Ethan was outstanding, he was brilliant in the field, he took his catch well, he was calm under pressure and he’s practiced brilliantly the past couple of days,” said Farbrace.

“Ethan was a real bonus for us and also for kids in the region and kids here in Abu Dhabi to see that if you practice and play well, the right way, opportunities will come your way and he was a real credit to himself and his family.

“This was fantastic for Zayed Cricket Academy and Abu Dhabi Cricket and Sports Hub to think that a young man at the age of 16 can come into the team, be selected and play in the first game of the tournament. It’s absolutely brilliant and it should act as a real incentive for young cricketers in the region that, if they work hard, the opportunities will be there for them.”

He said: “t’s bitterly disappointing that we haven’t won the game but we’re delighted that all the good work that’s happening at the Zayed Cricket Academy and Abu Dhabi Cricket and Sports Hub is actually paying fruit. It speaks volumes for the coaches and the academy.”

Team Abu Dhabi welcomed England international James Vince into the squad on the eve of the tournament, with the 31-year-old opening batter replacing compatriot Phil Salt, who misses out due to injury.

Leg-spinner Adil Rashid will also join up with his Team Abu Dhabi teammates on Thursday and will be available for selection when the side are next in action against Delhi Bulls on Friday.