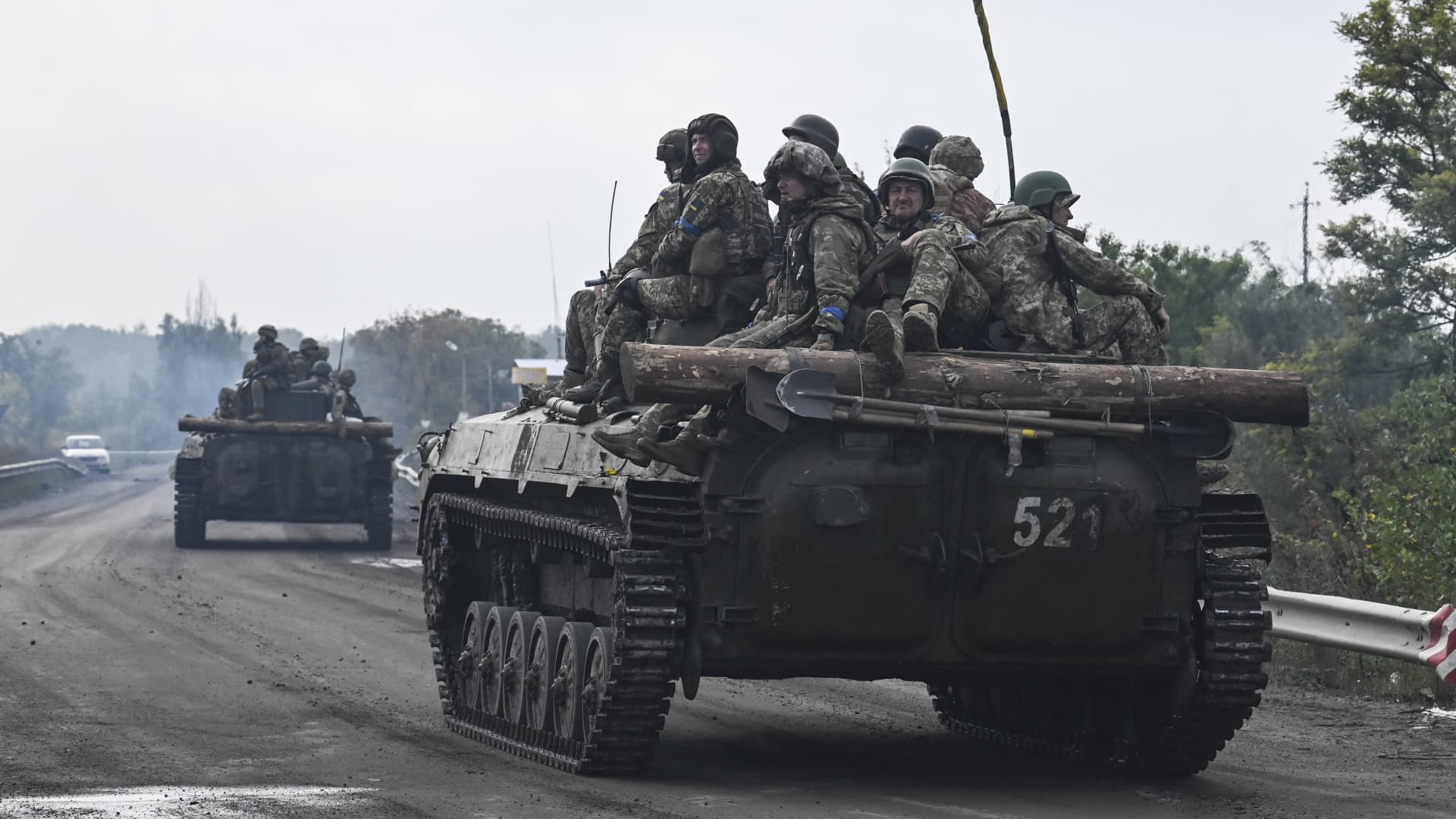 Ukrainian soldiers sit on infantry fighting vehicles as they drive near Izyum, eastern Ukraine on September 16, 2022, amid the Russian invasion of Ukraine.

The top U.S. general warned on Sunday it was unclear how Russia would react to its battlefield setbacks in Ukraine, as Britain said Moscow’s forces had widened strikes on civilian infrastructure and were likely to expand their targets further.

Ukraine’s General Staff said Ukrainian forces repelled attacks by Russian troops in the areas of the Kharkiv region in the east and Kherson in the south where Ukraine launched counter-offensives this month, as well as in parts of Donetsk in the southeast.

Ukrainian President Volodymyr Zelenskyy vowed there would be let up in the fighting.

“Perhaps it seems to some of you that after a series of victories we now have a lull of sorts,” he said in his regular nightly address. “But there will be no lull. There is preparation for the next series … For Ukraine must be free. All of it.”

Ukrainians who returned to the northeastern area retaken in Kyiv’s lightning advance earlier this month were searching for their dead while Russian artillery and air strikes kept pounding targets across Ukraine’s east.

On Friday, Russian President Vladimir Putin brushed off Ukraine’s swift counteroffensive and said Moscow would respond more forcefully if its troops were put under further pressure.

Such repeated threats have raised concerns Putin could at some point turn to small nuclear weapons or chemical warfare.

U.S. President Joe Biden, asked what he would tell Putin if he was considering using such weapons, replied in an interview with CBS’s “60 Minutes”: “Don’t. Don’t. Don’t. It would change the face of war unlike anything since World War Two.”

Moscow and Kyiv have accused each other of shelling around the plant that has damaged buildings and disrupted power lines needed to keep it cooled and safe.

U.S. Army General Mark Milley, chairman of the Joint Chiefs of Staff, called for vigilance after visiting a base in Poland aiding Ukraine’s war effort. His remarks were a reminder of the risks of escalation as the United States and its NATO allies aid Ukraine from a distance.

“The war is not going too well for Russia right now So it’s incumbent upon all of us to maintain high states of readiness, alert,” he said after his trip to the base, which reporters traveling with him were asked not to identify.

Five civilians were killed in Russian attacks in the eastern Donetsk region over the past day and in Nikopol, further west, several dozen residential buildings, gas pipelines and power lines were hit, regional governors said on Sunday.

In an intelligence update, Britain’s defense ministry said Russian strikes at civilian infrastructure, including a power grid and a dam, had intensified.

“As it faces setbacks on the front lines, Russia has likely extended the locations it is prepared to strike in an attempt to directly undermine the morale of the Ukrainian people and government,” it said.

On Saturday, Zelenskiy said authorities had found a mass grave containing the bodies of 17 soldiers in Izium, some of which he said bore signs of torture.

Izium residents have been searching for dead relatives at a forest grave site where workers began exhuming bodies last week. Ukrainian officials said last week they had found 440 bodies in woods near Izium. They said most of the dead were civilians and the causes of death had not been established.

The Kremlin has not commented on the discovery of the graves, but in the past Moscow has repeatedly denied deliberately attacking civilians or committing atrocities.

Making his way between graves and trees where exhumations were underway, Volodymyr Kolesnyk was trying to match numbers on wooden crosses with names on a neatly handwritten list to locate relatives who he said were killed in an air strike early in the war. Kolesnyk said he got the list from a local funeral company that dug the graves.

“They buried the bodies in bags, without coffins, without anything. I was not allowed here at first. They (Russians) said it was mined and asked to wait,” he told Reuters.

In Kozacha Lopan, a village some 45 km (30 miles) north of Kharkiv and only about 5 km (3 miles) from the Russian border, a Reuters reporter was taken to a squalid cellar with rooms fitted with iron bars, which officials said had served as a makeshift prison during the occupation. District mayor Vyacheslav Zadorenko said the rooms had been used as a “torture cellar” to detain civilians. Reuters was unable to verify those accounts.

Elsewhere in the region, residents of towns recaptured after six months of Russian occupation were returning with a mixture of joy and trepidation.

“I’ve still kept this feeling, that any moment a shell could explode or an airplane could fly over,” said Nataliia Yelistratova, who traveled with her husband and daughter 80 km (50 miles) on a train from Kharkiv to her hometown of Balakliia to find her apartment block intact, but scarred by shelling.

“I’m still scared to be here,” she said after discovering a piece of shrapnel in a wall.