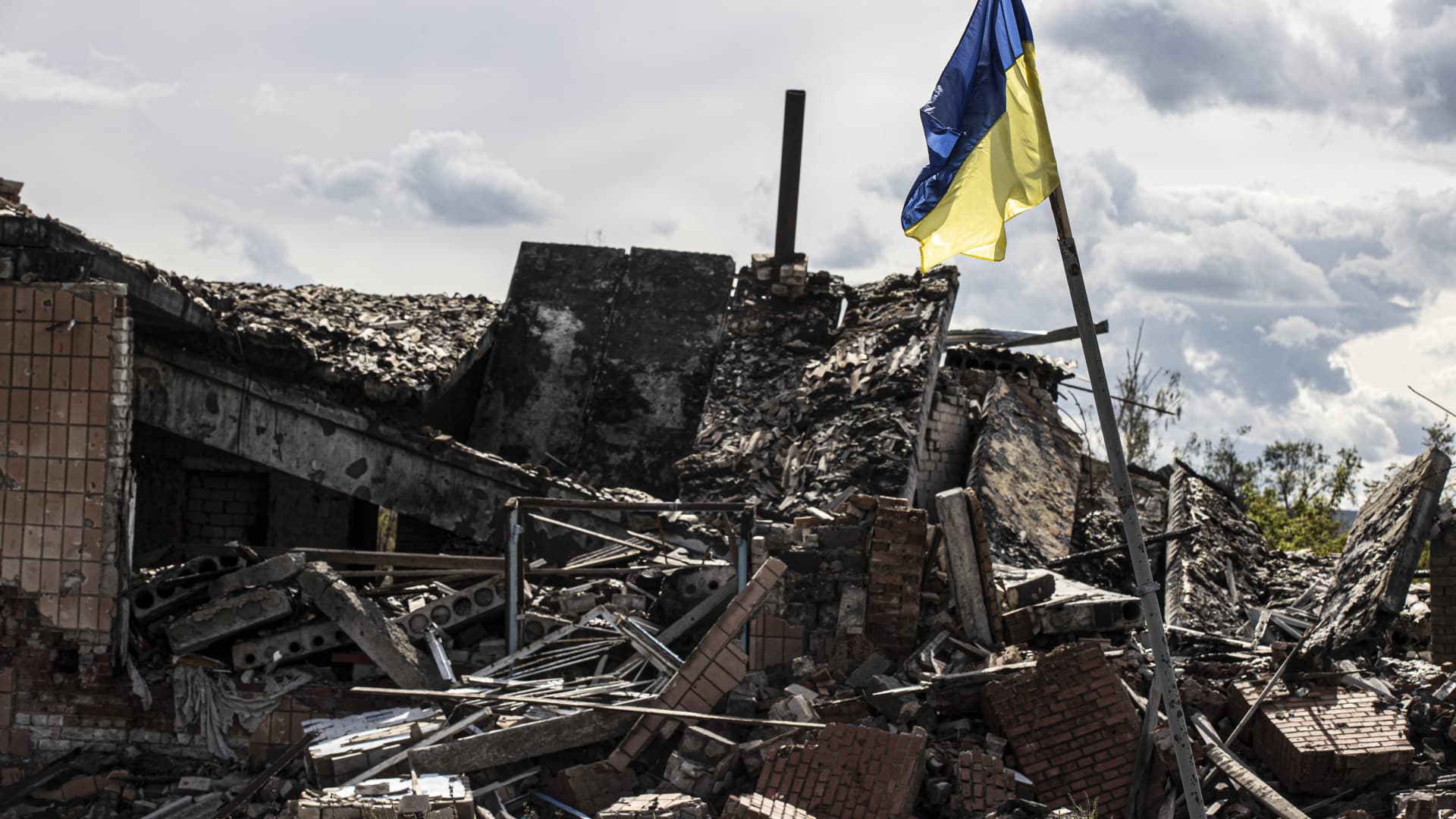 A Ukrainian flag waves in a residential area heavily damaged in the village of Dolyna in Donetsk Oblast, Ukraine after the withdrawal of Russian troops on September 24, 2022.

Ukrainian troops said they had retaken the key bastion of Lyman in occupied eastern Ukraine, a stinging defeat that prompted a close ally of Russian President Vladimir Putin to call for the possible use of low-grade nuclear weapons.

The capture on Saturday came just a day after Putin proclaimed the annexation of nearly a fifth of Ukraine — including Donetsk, where Lyman is located — and placed the regions under Russia’s nuclear umbrella. Kyiv and the West condemned the ornate ceremony as an illegitimate farce.

Ukrainian soldiers announced the capture in a video recorded outside the town council building in the centre of Lyman and posted on social media.

“Dear Ukrainians – today the armed forces of Ukraine … liberated and took control of the settlement of Lyman, Donetsk region,” one of the soldiers says.

At the end of the video, a group of soldiers cheer and throw Russian flags down from the building’s roof and raise a Ukrainian flag in their place.

Hours earlier, Russia’s defence ministry had announced it was pulling troops out of the area “in connection with the creation of a threat of encirclement”.

Lyman had fallen in May to Russian forces, which had used it as a logistics and transport hub for its operations in the north of the Donetsk region. Its capture is Ukraine’s biggest battlefield gain since the lightning counteroffensive in the northeastern Kharkiv region last month.

President Volodymyr Zelenskiy promised more quick successes in the Donbas, which covers the Donetsk and Luhansk regions that are largely under Russian control.

“Over the past week, the number of Ukrainian flags in Donbas has increased. There will be even more a week’s time,” he said in an evening video address.

Austin noted that Lyman was positioned across supply lines that Russia has used to push its troops and materiel down to the south and to the west, as the Kremlin presses its more than seven-month-long invasion of Ukraine.

“Without those routes, it will be more difficult. So it presents a sort of a dilemma for the Russians going forward.”

Austin did not say whether he thought Ukraine’s capture of Lyman might prompt Russian escalation, although U.S. officials have widely denounced Russia’s nuclear rhetoric in recent days and President Joe Biden has publicly urged Putin not to use nuclear weapons.

“In my personal opinion, more drastic measures should be taken, right up to the declaration of martial law in the border areas and the use of low-yield nuclear weapons,” Kadyrov wrote on Telegram before Zelenskiy spoke.

Other top officials, including former President Dmitry Medvedev, have suggested Russia may need to resort to nuclear weapons, but Kadyrov’s call was the most urgent and explicit.

Putin said last week that he was not bluffing when he said he was prepared to defend Russia’s “territorial integrity” with all available means, and on Friday made clear this extended to the new regions claimed by Moscow.

Washington says it would respond decisively to any use of nuclear weapons.

Analysts at the Institute for the Study of War (ISW), a Washington-based think tank, said the Russian military in its current state is almost certainly unable to operate on a nuclear battlefield even though it has historically trained to do so.

“The chaotic agglomeration of exhausted contract soldiers, hastily mobilized reservists, conscripts, and mercenaries that currently comprise the Russian ground forces could not function in a nuclear environment. Any areas affected by Russian tactical nuclear weapons would thus be impassable for the Russians, likely precluding Russian advances,” ISW said.

Serhii Cherevatyi, spokesperson for Ukraine’s eastern forces, said before the capture that Russia had 5,000 to 5,500 troops at Lyman but the number encircled could be lower.

Serhiy Gaidai, the governor of Luhansk region, said that the retaking of Lyman is one of the key factors for reclaiming lost territory in neighbouring Luhansk, whose full capture Moscow announced in early July after weeks of grinding advances.

“The liberation of this city in the Donetsk region is one of the key factors for the further de-occupation of the Luhansk region,” Gaidai wrote on the Telegram messaging app on Sunday.

The Donbas has been a major focus for Russia since soon it launched the invasion on Feb. 24 that Putin calls a “special military operation” to demilitarize and “denazify” its smaller neighbour.

The areas Putin claimed as Russian – the Donbas regions of Donetsk and Luhansk and the southern regions of Kherson and Zaporizhzhia – form a swath of territory equal to about 18% of Ukraine’s total surface land area.

Germany said it will deliver the first of four advanced IRIS-T air defence systems to Ukraine in coming days to help ward off drone attacks.