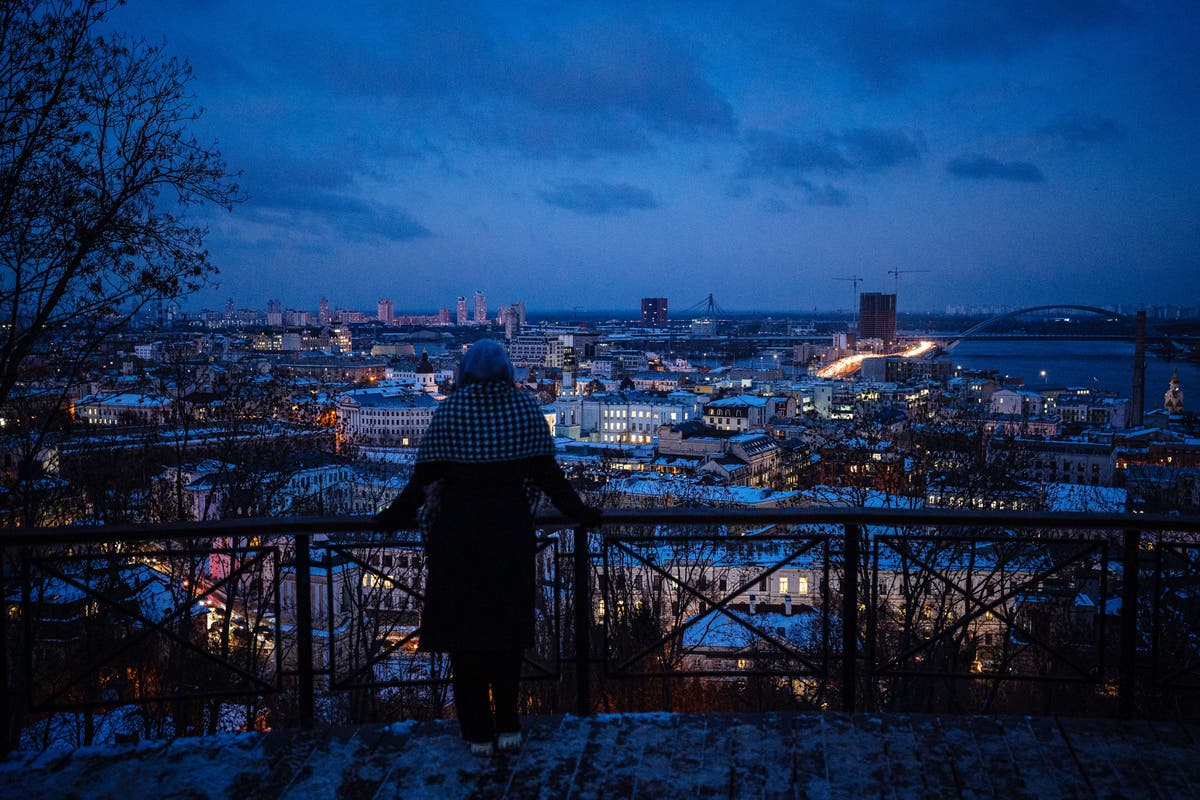 Speaking at an annual televised session of his Human Rights Council, President Putin said that Western rights organisations viewed Russia as “a second-class country that has no right to exist at all”.

“This is what we are dealing with,” Putin said. “There can be only one answer from our side – a consistent struggle for our national interests. We will do just that. And let no one count on anything else.”

He continued: “Yes, we will do this by various ways and means. First of all, of course, we will focus on peaceful means, but if nothing else remains, we will defend ourselves with all the means at our disposal.”

He added that Russia’s “special military operation” could be a “long process”.

Putin was responding to comments by a member of the rights council who said Ukrainian forces were attacking residential areas of the Russian-controlled Donetsk region.

Good morning, welcome to our coverage of the Ukraine war on Wednesday, 7 December.

Air raid sirens heard at Russian air base in Engels

The sirens were sounded on the territory of a military unit and “there is no threat to civilian infrastructure”, said Yevgeny Shpolsky, first deputy head of the Engels district, reported Russian state news agency TASS.

US tweaked missiles given to Ukraine to prevent strikes inside Russia

The US secretly modified a powerful rocket-launcher system it provided to the Ukrainian military to prevent it from firing missiles into Russia and escalating the nearly year-long conflict.

According to a Wall Street Journal report, the US modified the HIMARs so they wouldn’t be able to fire long-range missiles into Russia itself, hoping to head off a wider conflict or the perception that the US is an active combatant.

The tweaks mean the truck launchers can’t fire long range US Army ATACMs missiles, and foreclose the use of other long-range weapons systems Ukraine might acquire from other countries or companies.

This is likely a move by Washington to avoid getting into a direct conflict with Moscow. Russia has warned the Kremlin considers giving Ukraine long-range missiles would be considered a deliberate provocation.

“Thousands of Ukrainians have given their lives so that the day might come when not a single occupying soldier will remain in our land and when all our people will be free,” Mr Zelensky, seen in his signature khaki green, told the gathering of forces.

He visited Donbas – theatre of the heaviest battles between Russian and Ukrainian soldiers, and the Kharkiv region, where Ukrainians have retaken swathes of territory from Russian forces.

Mr Zelensky thanked the medical staff and the parents of servicemen. He also welcomed home 60 prisoners of war returned in a swap with Russia earlier this week.

“Thank you for this resilience and strength. You are an outpost of our independence,” the wartime president wrote in a Telegram post.

“I believe that next time we will meet in our Ukrainian Donetsk and Luhansk,” he said, referring to regional capitals in eastern Ukraine seized by Moscow-backed proxies in 2014.

“I am sure in Crimea as well,” he said, mentioning the peninsula illegally annexed by Moscow in 2014.

US not preventing Ukraine from developing long-range strike capabilities – Pentagon

The United States is not stopping Ukraine from developing its own capabilities to carry out long-range strikes, the US defence secretary Lloyd Austin said yesterday.

“We are not working to prevent Ukraine from developing their own (capability),” the top Pentagon official said.

This comes a report said that the US modified the HIMARs it has been providing to Kyiv so they wouldn’t be able to fire long-range missiles into Russia itself, avoiding a wider conflict or the perception that the US is an active combatant.

The tweaks mean the truck launchers can’t fire long range US Army ATACMs missiles, and foreclose the use of other long-range weapons systems Ukraine might acquire from other countries or companies.

This is likely a move by Washington to avoid getting into a direct conflict with Moscow. Russia has warned the Kremlin would consider giving Ukraine long-range missiles a deliberate provocation.

The UN humanitarian chief underlined the “colossal” torment Ukraine is suffering from “senseless war” and Russian destruction of its infrastructure.

“In Ukraine today, the ability of civilians to survive is under attack,” top UN aid chief Martin Griffiths said, pointing to strikes on power stations and heating plants that have left millions of people without access to heat, electricity and water in sub-freezing temperatures, families deprived of health care, and children unable to go to school.

He urged the world leaders to look at the urgent need to help Ukrainians get through the winter in the broader context of “a world gone mad,” saying the number of people globally needing humanitarian assistance next year is projected to rise by nearly 24 per cent to 339 million at a record high of $51.5b.

Belarus will observe security checks on its response to possible acts of terrorism and move military equipment and security forces today and tomorrow, reported its state news agency.

“During this period, it is planned to move military equipment and personnel of the national security forces,” Belarus’s security council said.

“The movement of citizens (transport) along certain public roads and areas would be restricted and the use of imitation weapons for training purposes is planned.”

It is not immediately clear what parts of the country are being used and which roads could be affected.

While Belarus has said it will not enter the war in Ukraine, president Alexander Lukashenko has in the past ordered troops to deploy with allied Russian forces near the Ukrainian border, citing threats to Belarus from Kyiv and the West.

Ukraine continued its long-held silence on attacks on Russian airbases and blamed callous Russian smoking for the latest explosion in the military base yesterday.

On being asked about the strikes, defence minister Oleskiy Reznikov made a longstanding joke blaming carelessness with cigarettes.

“Very often Russians smoke in places where it’s forbidden to smoke,” he said.

The attack came just 24 hours after Moscow accused Ukraine of similar attacks on two air bases at Ryazan and Saratov, emphasising the vulnerability of some of Russia’s most important military sites closest to the Ukraine border.

No casualties have been reported so far. The attacks on central Ukraine were all carried out overnight.

A video shared by the Ukrainian defence ministry showed more than a dozen explosions going off in sequence and was shared with the caption “Bakhmut”.

The latest intelligence update from the Institute for the Study of War reported that Russian sources claim it has made marginal territorial advances near Bakhmut, but have not succeeded in their efforts to surround the city.

The oblast in Donetsk and the area around the town has become the epicentre of fierce fighting after Ukraine took over Kherson in the southern region last month.