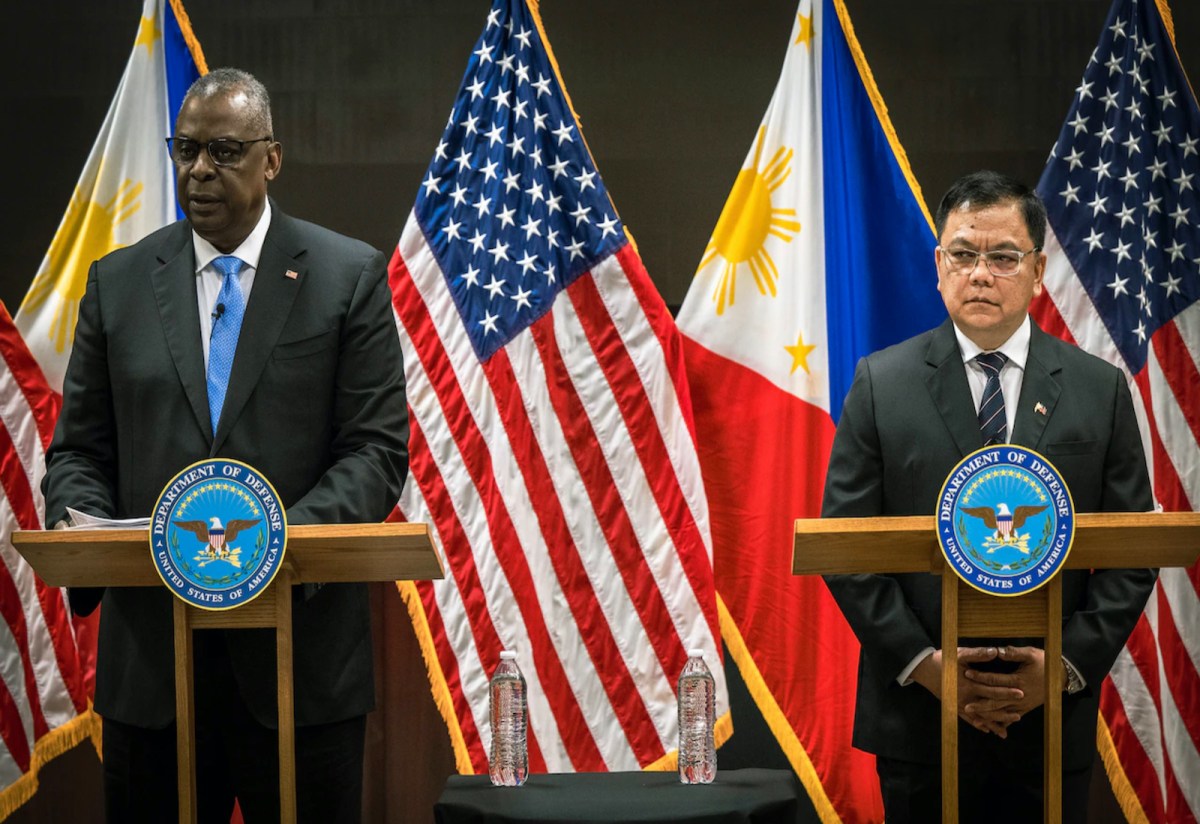 MANILA – For the first time, top defense chiefs from the United States and the Philippines personally joined detailed operational planning in the US Indo-Pacific Command in Honolulu, Hawaii, in a move to bolster their century-old alliance.

In a major departure from the anti-American tirades of his immediate predecessor, Rodrigo Duterte, the new Filipino leader has praised America’s role as an anchor of stability in the Indo-Pacific, which “is something that is much appreciated by all the countries in the region, and the Philippines especially.”

Encouraged by Manila’s apparent new strategic orientation, Washington is doubling down on bilateral security cooperation. It’s a strategic objective that has become more important and urgent in Washington in light of rising tensions over Taiwan and across the South China Sea.

With its strategic geographic location, the Philippines would be at the heart of any potential major conflict between the US and China in the region. As such, the two allies are expected to increase joint military activities to as many as 500 next year, with the US expected to deploy a whopping 16,000 troops for the annual Balikatan (Shoulder-to-Shoulder) wargames.

“Our countries share a vision of an open, secure and prosperous Indo-Pacific, free from coercion or bullying,” US Defense Secretary Lloyd Austin said during the recent unprecedented US Indo-Pacific Command meeting with his Filipino counterpart Jose Faustino Jr.

“The United States remains unwavering in our support for a strong and independent Philippines that can defend its sovereignty, ensure prosperity for its people and strengthen security in the region,” Austin said.

“Our two countries are working together to reach a common understanding of the importance of our defense alliance…in advancing our respective country’s interests and promoting peace and prosperity in the region,” Faustino told his American counterpart during his Hawaii visit.

Next year, the US and Philippines are expected to conduct more joint military exercises than any time in history and more than any alliance across the Indo-Pacific.

From 300 bilateral military activities in 2022, next year could see as many as 500 joint exercises, underscored by the doubling of US participation in the massive Balikatan exercises held on Philippine shores.

Those joint maneuvers, which in 2019 simulated warfighting including an amphibious seizure of an island in the South China Sea, have raised China’s hackles. This year they are expected to be expanded to involve amphibious and island protection drills in tandem with Australia and Japan.

After six years of uncertainty and mutual recriminations under Duterte, who repeatedly threatened to end the Philippine-US alliance after US criticism of his government’s human rights record, the two long-time allies are now racing to make up for lost time in upgrading the alliance, which is underwritten by the 1951 Mutual Defense Treaty (MDT).

“We’re trying to do the kind of modernization process that we did with the Japan-US alliance in the 1990s – we’re trying to do it [for the Philippine-US alliance] in about two years, what took 20 years in the case of Japan,” Gregory Poling, a senior fellow at the Center for Strategic and International Studies (CSIS) in Washington DC, told this correspondent.

In the past few months, the two allies have pressed ahead with full implementation of the Enhanced Defense Cooperation Agreement (EDCA), which grants the American military sweeping access to a wide range of vital military bases across the Philippines.

By building advanced military facilities in strategically-located Philippine bases, the US Pentagon will in future be in an optimal position to build both a forward deployment presence as well as jointly respond to nearby contingencies.

In a statement, the Pentagon has recognized how the two allies are “deepening our enduring security alliance under the auspices of the Mutual Defense Treaty and multiple other agreements, including the 2014 Enhanced Defense Cooperation Agreement [EDCA].”

“Looking ahead, we seek to enhance the posture of our alliance to address new and emerging challenges,” a Pentagon spokesman said. “We intend to continue to implement infrastructure projects at current EDCA locations and explore additional sites for further development,” he added.

“[O]ur relationship with the United States is at its best right now,” Jose Manuel Romualdez, a close relative of the Philippine president and the country’s longstanding ambassador to Washington, recently told the Philippine Congress.

In particular, the Basa Airbase, which is situated strategically in the South China Sea and near Taiwan, has been the site of several recent big-ticket joint projects under EDCA.

“And that’s the sign of the urgency I think both bureaucracies [have] at least recognized…and Taiwan is a key part of this,” Poling told this correspondent, underscoring the broader relevance of the US-Philippine alliance amid rising US-China tensions in the region.

Throughout the Cold War, the Philippines’ hosting of America’s largest overseas bases was an essential component of US regional operations including military interventions in Korea and Vietnam. Over the past two decades, however, counterterrorism and, to a lesser degree, the South China Sea disputes have largely dominated bilateral security cooperation.

Now, the Biden administration is intent on fortifying the Philippines’ position in its “integrated deterrence” strategy for the Indo-Pacific, drawing on a wide network of bases and alliances across the First and Second Island Chains, stretching from Japan in the north to Australia in the south, with the Philippines along with Singapore and Vietnam serving as key Southeast Asian partners in between.

Aside from being America’s oldest ally in Asia, the Philippines’ geography is increasingly seen as vital to the Pentagon’s operational priorities in the region. In particular, the Philippines’ northernmost and essentially uninhabited island of Mavulis, located in the Luzon Strait, is only 140 kilometers from Taiwan’s southernmost tip.

It currently hosts a squad of Filipino soldiers in a small shelter, a desalination plant and a lighthouse – and obviously has the potential for US-assisted expansion under the EDCA. The Philippine military has also stepped up its efforts to build naval facilities on nearby Fuga Island.

The strategic relevance of those island posts came to light in 2019, when the Philippine military blocked attempts by several Chinese companies to invest in the strategically-located islands.

“The Chinese have no use for Fuga [Island]. It [the private investment bid was] really…about Taiwan, to deny us, and in extension the US, the use of those islands [in the event of war],” Colonel Michael Logico, director of the Philippine military’s Joint and Combined Training Center, recently told the media.

A number of high-profile war games conducted by top Washington-based think tanks showed that any major kinetic operation by China will likely concentrate on Taiwan’s southern shores. And America’s access to nearby Philippine bases proved a crucial element in a potential US victory against invading Chinese forces.

“We are a US ally, we are in a strategic location. We are so near that if anything happens in Taiwan, we will be involved,” former Philippine military chief General Emmanuel Bautista recently told media.

The Philippines represents a “key terrain” for Sino-American competition, Bautista said, since it connects the South China Sea and the Pacific Ocean via the Sibutu Passage in the south and Bashi Channel and Luzon Strait in the north.

While the Marcos Jr administration has so far tried to project “neutrality” on the Taiwan issue, and repeatedly called for peaceful management of the crisis, Manila has expressed new openness to allowing American access to its vital bases in the north in the event of a Taiwan or other contingency.

“Nobody wants to have any kind of war or confrontation,” said Romualdez, a key architect of the recent Philippine-US rapprochement. He recently said that the Philippines will allow US forces to access Philippine bases “if it is important for us, for our own security.”

For some experts, however, the Taiwan crisis, and the Philippines’ potential response, represents an existential challenge to the US-Philippine alliance.

“What would it do to the US-Philippine alliance if Americans were dying 50 miles from the shores of the Philippines and the Philippine government refused [to assist]”, Poling, who leads CSIS’s Asia Maritime Transparency Initiative (AMTI), told this correspondent.